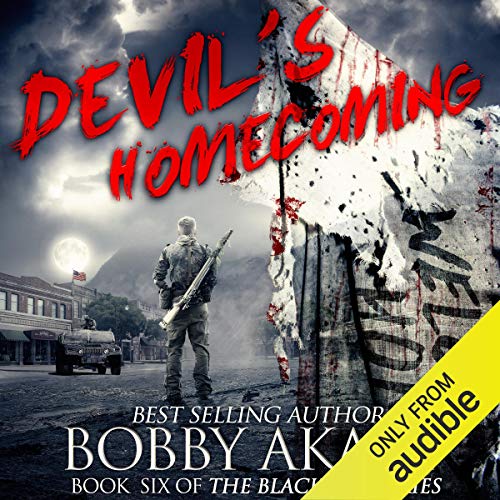 By: Bobby Akart
Narrated by: John David Farrell
Try for £0.00

The dawn of human existence has proven we are warlike creatures.

Civilizations are built, then they're destroyed.

After destruction, will you have the tenacity to overcome obstacles and rebuild?

Your fellow man may be the biggest hurdle because hell is empty and the devils are all here.

This fast-paced post-apocalyptic dystopian fiction series from author Bobby Akart (The Boston Brahmin series and the Prepping for Tomorrow series), has been hailed as a masterpiece of EMP survival fiction. Prepare to learn, as well as be entertained, as The Blackout Series continues with Devil's Homecoming.

In the final installment of The Blackout Series, Devil's Homecoming, an unexpected turn of events deals the rebuilding effort a near deadly blow as the United States Government, in the form of a FEMA occupying force, descends upon Savannah. The FEMA battalion's leader is hell-bent on revenge and he is proof that in a post-apocalyptic world, hell is empty and all the devils are here.

Note: This audiobook does not contain strong language. It is intended to entertain and inform audiences of all ages, including teen and young adults. Although some scenes depict the realistic threat our nation faces from a devastating solar flare, and the societal collapse which will result in the aftermath, it does not contain graphic scenes typical of other audiobooks in the post-apocalyptic genre.

Books in The Blackout Series:

What listeners say about Devil's Homecoming

Not the best in this series but a half decent read

Again this writer does skim over the important parts like they are irrelevant such as as the relationships between people. The writer wants to focus on action and men stuff which is great to read and keeps us reading but there were times in the book the the reader wasn't able to connect with the characters as they are stereotyped cardboard cut outs. Two main characters for example had been swooning over each other in the first book and in the second it refers to a moment that the reader was not privy to where in the readers absence the pair had shared a kiss behind the oak tree. Really? SHARED A KISS. Saying goodbye as they head off to war Stubby tells someone to watch over his SSWEETHEART wife tho we do not see him even bidding her goodbye where as even his eyes glancing at the young girl he has chosen to take down the leaders with is mentioned everytime. The writer doesn't write about those developing relationships and emotions which annoys the reader whilst reading. I found the relationship between Alex and the old guy odd and unrealistic also. This man with military stature chooses a young teenage girl to confide in over his real thoughts and plans of strategic attack and asks her advice rather than his son and step sons who are great warriors in this new war. He has all the cowboys and successful and capable ranch men also stood beside him fighting yet he rlchooses a young teenage girl to be at his side for such a high profile and dangerous attack which is just odd. Their last moment together was just weird and unrealistic and a bit creepy which devalued to the whole story. more missed intimacy the reader missed out on with a marriage proposal after the ending too just to top it off. Her unrealistic parents won't mind her marriage if they didn't mind her running off alone with the old man on dangerous fights whilst the actual men skilled in war stayed behind at the camp fire. won't read anymore by this reader he has no depth.

End of an era.

This picks up exactly where the last one ends, with a squadron of FEMA soldiers descending on place. They are being heavy handed with the people because of who is in charge! It's up to the Ryman family and their friends to try to put a stop to the tyrants and finish this once and for all.

That's all I'll say about the story because I could easily spoil something!! I have to say, I'm sad to see the series end, but it was a fitting end for them!! This ties the Ryman family story up nicely and I liked the way it ended. The plot was fast paced and intense because it's them against us basically, and I was hooked the whole way through.

These may be quick reads but every story is well written and developed and the author creates characters that are easy to like and easy to relate to. The Ryman family have come far from the normal family they once were. They are hardened and will do whats needed to survive.

In all, this is a great series and on that anyone can read. I thoroughly enjoyed every book and this author has become one of my favourites. It's a must read.

Again, John David Farrell captured the essence of this book perfectly. He has the right inflection at the right time and told this really well. I will have to check out more by him!!

I was voluntarily provided this audiobook for free from the author, narrator, or publisher. This in no way affected nor influenced my thoughts.

A fitting finale to this series

When you put hours and hours into a series of books you really want it to have a great ending.  Devil's Homecoming had a really enjoyable one.  It was one that you were hoping for 4 books ago but things kept happening to the remaining survivors.  Akart was able to take 5.5 books of information, history, and feelings and pull together a believable and enjoyable finale.

Devil's Homecoming picks up right where Hornet's Nest left off -- on Main Street where FEMA officials are trying to round up the people during their Thanksgiving celebration. The main characters of all 5 books up until now are all in play to try and end this nightmare once and for all.

The Tiger Tails really took my heart this series - I love their tenacity and ability to save the day throughout.  Akart wrote them in such a way that they were believably young but also able to do a lot since they had to grow up quickly throughout.  The same can be said about the Ryman daughter.  She was into normal girl things and golf before the CME hit the Earth and since then she's grown up quickly from book to book.

This book was well worth the wait and thankfully Akart didn't make us wait years to get through the entire series. I loved the story arc's within each book and the overall arc throughout the series.  I felt like he put a ton of thought into what and why things were going to happen.

Overall, I'm happy to be done with the Blackout Series but I'll be sad to see all of these characters go. I am excited to move onto Akart's newest series: Pandemic.

I received a free copy of this book. It has not affected my review of my opinion.

If you enjoyed this review, please vote for it! Every vote helps. If you'd like to see more books like this please check out BriansBookBlog DOT com.

This would make a great mini TV series

I was glad to be able to listen to the entire series from beginning to end.
I have all the aspects of a great drama.
It makes you think about wearing a tinfoil hat.

Best book of the series

John David has started to grow on me. This was probably the best book in the series. The normal twist interns of the book keep you listening to the end, it's kind of sad to know that this is the last book in the series but not everything went perfect and there were losses on both sides that we're not planned or foreseen. This book started off with a good recap from the previous books and tied right in without any flaws and it seemed like one big book. I have been a huge fan since the start and look forward to the next series that Bobby releases.

"Devil's Homecoming," in my opinion is the best book of the series. Overall Akart keeps the reader at the edge of their seat. This end is packed full of action, strategizing, love, and hate. Be prepared for 5-6 hours without lull. This book will leaving you satisfied, but wishing it were not the end.

I'd call this a page turner, if it wasn't on Audible! heading to the Yellowstone series next!

I grew to love these characters and have enjoyed seeing how each one evolved in this post-apocalyptic world filled with both, unity and violence! The tactics used by the characters were very creative. And, Mr Farrell did a great job with narrating this book!

No other series comes close to theses books

What a ride and what an insight into a plausible future. don't miss any books in this series.

Would you listen to Devil's Homecoming again? Why?

Yes, it is a great story.

Alex, read or listen to book to figure out why...

Have you listened to any of John David Farrell’s other performances before? How does this one compare?

Yes, as good as always.

I have enjoyed every Akart book I have read or listened to! I look forward to every new book/series he starts.

Fast paced excitement till the very end! Kept me guessing how things would unfold and was a perfect end to a series that kept me at the edge of my seat from book one!