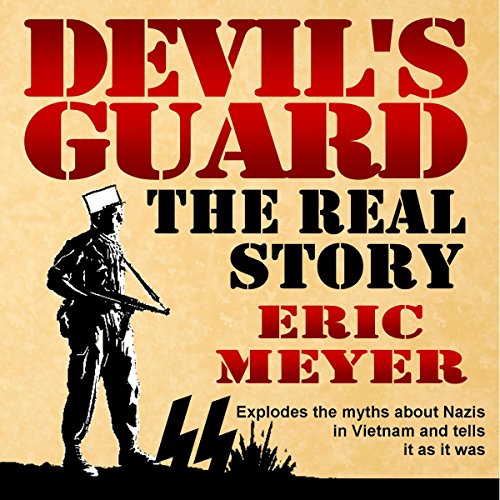 Following the myths and legends about Nazis recruited by the French Foreign Legion to fight in Indochina, Eric Meyer's new book is based on the real story of one such former Waffen-SS man who lived to tell the tale. The legion recruited widely from soldiers left unemployed and homeless by the defeat of Germany in 1945. They offered new identities and passports to men who could bring their fighting abilities to the jungles and rice paddies of what was to become Vietnam. These were ruthless, trained killers, brutalized by the war on the Eastern Front, their killing skills honed to a razor's edge. They found their true home in Indochina, where they fought and became a byword for brutal military efficiency.

What listeners say about Devil's Guard: The Real Story

lying bastards it is not the unabridged version

What a massive disappointment. What could have been a incredible story was thrown away in favour of a trashy third rate novel. Riddled with inconsistencies and with a painful love interest that was as surreal as a kinder egg on the moon. Made all the more cringe by being read by an elderly American who sounded like he was reading a bed time story to an eight year old. It was beyond awful don’t waste your money or time with this drivel.

A book that I was looking forward to completely ruined by the narrator. Trying to do different accents made it unbearable to listen to. You think I’ll buy it and read it myself. Very disappointed.

Absolute fiction, the parts where the main character makes love with a rescued prisoner in a RON point in Triple canopy jungle was the final straw.

Not the original story

what happened to the original story of the devils brigade. Feel like I've been cheated to only half a story.

I couldn’t listen anymore the narration was too irritating. I will have to read a hard copy.

Narration Unlistenable.
Listen to a sample.
Written as at the level for middle schoolers. Cannot be taken seriously

the narrator is horrible and the story itself starts off good but falls on it's face fast when the story progresses into the super secret mission. I'm happy I didn't spend money on this book and I'm also mad I wasted a free credit to listen to this horrible book.

Written by a stout Wehraboo.

Well, kind of uncomfortable to listen to tbh. Not a terrible book. Good enough story.