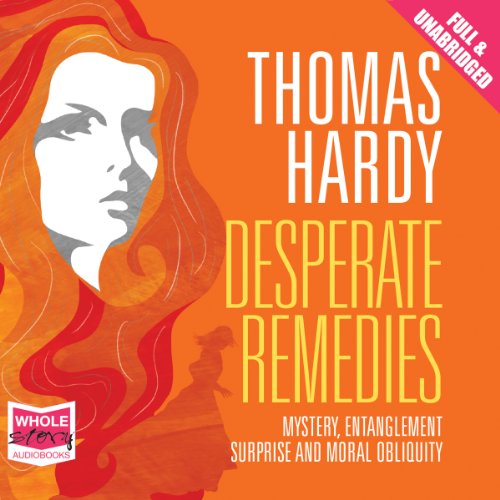 By: Thomas Hardy
Narrated by: Melody Grove
Try for £0.00

Cytherea has taken a position as lady's maid to the eccentric Miss Aldclyffe. On discovering that the man she loves is already engaged to his cousin, Cytherea comes under the influence of Miss Aldclyffe's fascinating, manipulative steward Manston.

Desperate Remedies contains sensational ingredients of blackmail, murder and romance, but with its insight into psychology and sexuality it already bears the unmistakable imprint of Hardy’s future genius. This compelling story also raises the great questions underlying Hardy's major novels, which relate to the injustice of the class system, the treatment of women, probability and causality. Thomas Hardy described Desperate Remedies, his first novel, as a tale of "mystery, entanglement, surprise and moral obliquity."

What listeners say about Desperate Remedies

I could not put this down—I.e., could not turn it off. Though only Hardy’s second novel, it displays some of his strengths as a writer: compassionate depictions of women’s in 19th century society, finely drawn descriptions of place and everyday activities, depth of characterization. The narrator, Melody Grove, is one of the best I have ever heard.