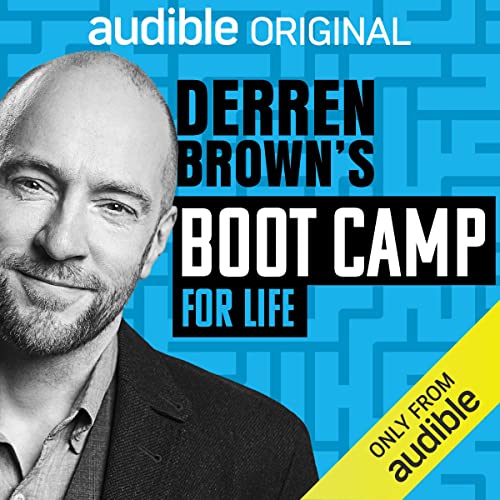 Listen to clips from the podcast

Derren discusses the highs and lows of stress

Our sense of self explained

Born in Croydon in 1971, Derren’s big break came in 1999 when he was asked by Channel 4 to put a TV show together – Derren Brown: Mind Control. Since then, his name has become synonymous with the art of psychological manipulation. Amongst a varied TV career, Derren has played Russian Roulette live, convinced middle-managers to commit armed robbery, led the nation in a séance, stuck viewers at home to their sofas and successfully predicted the National Lottery. He has won various awards, including a BAFTA, an RTS Award and two Olivier Awards. In 2017, Derren made his stage debut in New York with his show Secret, winning the 2018 NY Drama Desk award for Unique Theatrical Entertainment. As an author, he has received much praise for his best-selling books, Tricks of the Mind, Confessions of a Conjuror and Happy. After a successful run of his latest theatre show, Derren Brown: Showman in 2021, he is currently preparing for Showman 2022, which kicks off in March 2022.

What listeners say about Derren Brown's Boot Camp For Life

I want to start by saying that I’ve always liked Derren’s work. I’ve seen him live a lot of times and I’ve read his books. That is why I listened to this but I was very disappointed with the content. It felt like a lot was being said but very little information was shared. Rather than explaining techniques to help, this felt like topics were glossed over but not really explained. This is a purely personal thing as well, I feel that derren is over the top with blowing his own trumpet in this. There is so much self applause mixed with an undertone of grandeur, that in a book helping with mental health, left a disgruntled feeling. I also felt that the french happiness, bitter taste in the mouth summed up what derren has seeded the whole series with and it just feels cheap and unneeded. Listen to the series and you’ll understand

I listened to DB's previous Audible podcast, Derren Brown's Boot Camp for the Brain, and while I enjoyed it, I had no real desire to go back and give it a second listen. I'm already on my second listen of this one, however, and plan to give it a third listen and make some notes.

I'll admit now that I'm a massive DB fan. Add to this the fact that he references Oliver Burkeman, author of the life changing must-read '4,000 Weeks' and speaks to another of my favourite thinkers and social commentators, the brilliant Sam Harris, and really, for me anyway, this is unmissable stuff. I just read a review that said that although they'd enjoyed this, they felt that DB was 'a bit too full of himself'. Okay, let me add this: the icing on the cake of this gem is DB's *very obviously* self deprecating humour. I have laughed out loud at this on several occasions (the comment about the orangery and the pool cover...) and find it unbelievable that anyone could seriously begin to think that he is being anything other than hilariously ironic. The fact that DB has the gift of being able to deliver his witty asides in such a wry, off the cuff way just adds to the inherent listenability of this. Oh, and the Anglicised language and pronunciation is an absolute breath of fresh air in these default-Americanised times. He says 'lee-verage'! He says '@rsehole'! Infact, the utter disdain with which he spits out the word '@sshole' is deeply enjoyable.

Contrary to another piece criticism I've read, this series DOES very clearly offer solutions to the problems it identifies, recommending approaches like taking a Stoical or a mindful approach to worrying and catastrophising, and suggesting Cognitive Behavioural Therapy as a way to tackle anxiety disorder, amongst other things. Presumably these dissatisfied reviewers want some kind of tailored therapy plan to feel that they've got their money's worth from this free series? Maybe it should come with a warning (in addition to the increasingly amusing ones about The Language) that makes it clear that *some actual further research* may be necessary? Sigh.

Anyway, you'll have gathered that I enjoyed this: along with the aforementioned '4,000 Weeks' by Oliver Burkeman (some of the themes of which this explores further), I'm feeling that 2022 has already offered up two genuinely essential tools for getting through this thing called life without going completely mad or stabbing anyone in the throat.

Give that man a gong for services to humankind right now.

I've never been a particular fan of Derren Brown, not into magic and I don't like illusionists (smug buggers). But this - and his last series - is excellent.

He's easy on the ear, insightful, and I've enjoyed every minute. It even sent me off on a few new avenues to research.

Do yourself a favour and listen to it.

Absolutely amazing. So insightful. The intelligence behind all this really leaves you questioning your behaviours and helps you to understand so much about yourself.

Does anybody know of the song played at 29minutes on the second episode. This is as far as I have got so it would be unfair of me to make a judgment at this point but if anybody knows the song… because it’s eating me up inside then that would be great. Thanks

Not much new here

I really enjoyed Boot Camp For Your Brain, but this I feel has fallen way short. It's like someone had a great idea to present ideas and information about the mind and brain (the earlier podcast) which was fabulous - but then became successful enough that now there was a need to try and come up with another reason to do a second podcast, although all the really interesting stuff was done in the first one.
As a result I didn't think this podcast has anything new to offer, and a lot of the ideas and topics were bland and not all that interesting. And because of the more typical subject matter, it came across as much more 'self helpy', which I didn't enjoy at all.
I haven't read all the reviews, obviously, but I'm surprised that none I've read so far have mentioned the awful sound quality in this podcast too. Most of Derren's voice over is muffled, and this didn't make it any more enjoyable to listen to.
Some parts that touched upon ideas from the earlier podcast were, to me, the only good bits. So I'm afraid I can't recommend this one at all, you won't miss anything by not listening to it, but do listen to Boot Camp For Your Brain instead.

This is a witty, erudite and palatable rendition of some of the points made in his book “Happy,” which if you enjoy this presentation you will enjoy too.
The book has more meat to it and no music and so on, but it’s a description of practical applications of the Stoic philosophy, which I’m persuaded is a lot more useful than most other self help books.
It contains very British humour, so I hope it’s not too mashed by US reviewers as a consequence ;)
Will listen again.

Another brilliant installment by Derren.

Thoroughly enjoyed this podcast. Very insightful & looking forward to (hopefully) another series in the future!

Good but biases creep in

Much like his last, boot camp for the brain, its good content well delivered in his nice style dripping with gravitas.
However, again like his last effort, a episode (7) is spoiled by biases in who he chose to discuss their take on things; alt left creep in an anti-capitalist and a lady with her own re-education camp for kids ranks poor for those wishing to do good in my opinion, or could it be an example of how far people try to do their own version of good?

Good but gave in to the wokies on the home stretch

Huge fan of Derren Brown here, been to see him live, bought and read all of his books, watched all of his TV shows / specials.

I listened to this before Boot Camp For The Brain, probably should have heard that first really, which I am most definitely going to get stuck into next - despite my criticisms below.

Going to start with the positives.

Derren is a brilliant presenter, he delivers this exceptionally well keeping you interested from start to finish with plenty of humour tucked in for good measure and the pacing of the whole thing is just perfect. The production of the podcast is outstanding too. The producer, composer and sound designer deserve credit for a job very well done. I found the information on offer interesting and helpful as I'm sure many others will too. As has been mentioned in some other reviews, I felt it could have gone a bit deeper into some of the techniques and coping strategies, but that in no way negates the value of what is presented here.

Episode 7. Why Derren or the production crew thought a chapter entitled "A Good Life" should focus on a young vegan, anti-capitalist, social justice warrior and climate change cult member with a double-barrelled surname is beyond me. For starters - a twenty-something socialist who believes the world is evil? - What incredible lengths must the production team have gone to to locate one of those... not. But more importantly why the need to bring the "woke" political nonsense into it? Ironically, these are the very people that would probably benefit from the help of a podcast like this to break them out of the cycle of fear they've been bred into, yet in this series they are presented as people attempting to achieve "A Good Life" - not very responsible really is it. This was a disappointing turn of events for me on what was, up until this point, another shining example of Derren's immense talents as an entertainer and a communicator, not to mention a thoroughly enjoyable podcast.

I'm very aware of what was discussed during one of the conversations regarding audience criticism so I want to end this on a positive note as this podcast and Derren deserve a good review.

Despite my dislike of the shoehorned politics my star rating is high as this is one polished audio production that is not just entertaining and rewarding but also an absolute joy to listen to. My suggestion, if you want to get the most out of this skip the far left propaganda in episode 7 - unless a whiny well-to-do twenty-something saying how everything is "f*cked" over and over again is your thing.

This is an excellent collection of fairly simple yet practical advice for leading a better, more considered life. Derren's commitment to helping us plebians understand the complexities of human psychology echoes throughout his work, and these audio programs are a prime example of that. He points our attention to several common cognitive/behavioral pitfalls that many of us fall prey to, and guides us through navigating them more mindfully than we may have before. I can't think of a person that wouldn't benefit from giving this program their attention. Would highly recommend.