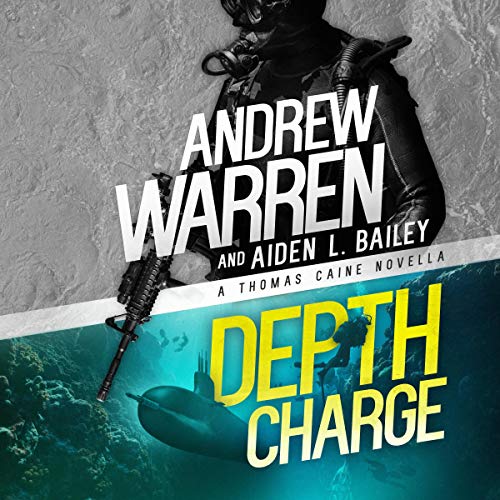 The Hai Long is 110 meters long, and glides silently beneath the waves at incredible speeds. It is the most lethal nuclear submarine in China’s naval arsenal. And only one woman knows how to find it.

CIA Paramilitary officer Thomas Caine is assigned to bring in a terrified Chinese defector who claims she can track the stealthy submarine’s movements. But he soon uncovers an unholy alliance between the commander of the deadly vessel and a sadistic organized crime cartel.

Caine and his allies must battle Chinese assassins, Colombian killers, and nature’s savage fury, as they struggle to crush an international criminal conspiracy. But when his enemies strike at the person he cares for most, the CIA’s deadliest killer takes on a new mission: Revenge.

What listeners say about Depth Charge

Things can always get worse.

Simply superb.
Not only is this thriller, crossing several countries from China, South America and to the U.S.A, well written with brief descriptions conjuring up atmosphere and place, the characters emerge fully fleshed as real, living people. There is action aplenty, of course, but none of it feels misplaced or even improbable. People get hurt. They are fit, they are trained, they are resourceful - but they are also human, not superman.
Great story, too, with separate, related missions merging finally into one. But more than all of this, Depth Charge has an unusual plus for a spy-cum-assassin thriller - it has emotion. The protagonists try to hide it, or course, but it seeps out of the pages, drawing the readers ever closer into the story by making them care, and fear, and hurt when things (inevitably) go horribly wrong. Narrator Chris Abell's performance matches the book in speed and delivery: fast, clinically precise and with voicing for each protagonist. Very good.

Written to precede Devil's Due in the Caine chronology, when he was still an officer in the C.I.A's Special Operations, this book helps to reveal the man he is to become.
Excellent book, exciting and emotionally gripping and even better in Audio than one the written page.
Highly recommended.

This is a very enjoyable, fast paced thriller. Immediately we are immersed into the world of government secrets, fugitives, and spies. A Chinese national needs to defect and Caine is tasked with getting her into the West. Of course there are plenty of twists and turns, an evil Columbian Cartel sicario, Chinese secret police assassins, and Chinese collusion with the Cartel. Lots going on in a very short time, including a touch of Caine’s love life and and an old friendship. The narrator does an excellent job of presenting the story and keeps the action going all the time. I highly recommend both the Kindle version and especially the audiobook which I am partial to.

Intense From Beginning To End

Respect where respect is due - check out how awesome this cover is. Onur Aksoy is listed as the cover artist and I thought that they really did this book justice.

The best part about these Caine: Rapid Fire Novellas is that they are tightly packed action from beginning to end.  But, you don't miss any of the character and world building.  Warren & Bailey are able to do both in the same novella without turning it into a novel.

Depth Charge, as mentioned above, was insanely fast-paced.  It weaves a couple of stories together - but basically, there is a Chinese submarine that is going to help the Mexican cartels deliver cocaine to the US.  There is so much more going on in this book and really describing much more would ruin it for you.

Warren & Bailey are able to write characters that really jump off the page.  Obvious Caine has been written about numerous times before, but other characters like the Chinese defector that comes up in Depth Charge are so well written.  When things change and other things are revealed you almost feel betrayed.  They did such a perfect job describing them - when things change - it's almost hurtful, which to me is a sign of excellent fiction.  A character that is so well written that when things aren't as they seem, I feel personally offended as a reader.

Overall, this might be my favorite Caine Novella yet.  I thought that the action mixed in with the personal stories made this one an absolute winner.

I really think that Warren has found a winner in Chris Abell as the narrator.  I absolutely love him portraying Caine - and for the rest of the characters, he's just seamless.