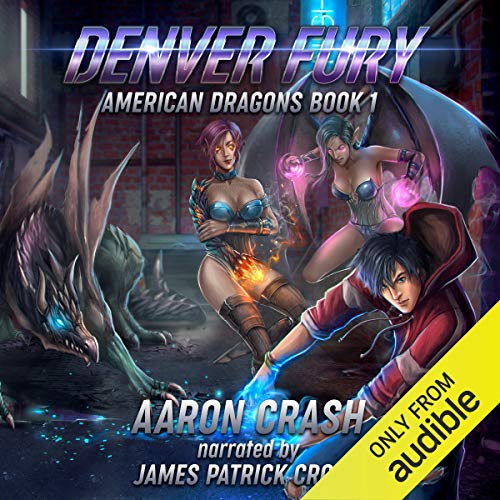 By: Aaron Crash
Narrated by: James Patrick Cronin
Try for £0.00

Gather an escort. Acquire a dragon hoard. Build an empire....

Steven Whipp, a normal, poor college student, is kissed and shot on the night of his 20th birthday. He realizes three things: He’s bulletproof; he’s a dragon; and everything he’s ever wanted is within his reach. But the attempts on his life are just the beginning of his troubles.

Steven is a Dragonsoul - a magical race of beings who have thrived, hidden from the eyes of humans, in control of the world. And not just any Dragonsoul but the last in a long line of Arch-Sorcerers, thought long dead. Now he is being hunted, and he must unlock his powers through battle and sex, or ancient forces and old feuds will destroy him and all he loves.

Disclaimer: Denver Fury is a shoot-em-up, action adventure, urban fantasy novel which is not intended for listeners under the age of 18 years of age. This novel contains swearing, violence, and a harem of beautiful shapeshifting women that the hero regularly sleeps with - and he does so gladly.

Ok, hands up, I picked up the book thinking it was going to be a no brain power fantasy plus harem elements after getting out of something pretty heavy.

The writing is crap, even the pet names are ripped off. I'm stopping at book one, but let's just say - witch powered by sex and a female of the same sort of race being the first two partners of the MC. Didn't even get original there. The only difference is that the females in this need rescuing rather than Valens wives who were more likely to save him. Yawn.

If you want an easy power fantasy with half decent writing, get Valens Legacy. If you want all that but with painful writing instead, get this.

Oh, the sex is painfully shit as well.

I enjoyed listening to the story and the characters are quite interesting. I look forward to the next book in the series.

This was an interesting read, the concepts and characters work really well if a little bit of the fantastic goes into the situation as is typical of harem style.
Given the female rescue, discover, upgrade and levels of bad guys you expect drom this type gives a good grounding to this and is fairly easy to keep track of skill trees etc.
Narration by James Patrick Cronin is quite good although i would prefer the female voices to be different so probably about 4.5 .
Story and overall give this a 5 star and most definitely a follower of the series.
I requested this audio and have left my thoughts on this for you to peruse.

Good story but nothing new really.

The story is great I liked the World and the magic system in it but the romance follows the same trope like so many other "harem" novels and it's what did turn me of a bit especially when its the main character that has the least experience while the oppostite has slept with a hundred and for some reason they keep using the word pansexual just to use it as if the author is afraid his book will be targeted or something. But all in all if you have nothing else to listen to then this is the one for you.

I wanted to like this book but I don't The narrator isn't that great for one, the plot is basic, and the magic system OMG let me tell you about the train wreck that is the magic system. The worst magic system I have ever had the misfortune to read. You gain magic or whatever the equivilent is in this book is, by having sex, kissing, killing, and winning a fight. Okay that's not that bad you say but here is the kicker; magic spells are cast by saying just this magica defensio, magica curea, just add an a or an io to the end of words and boom. That's not all folks, there are only three maybe four upgrades down each line of the dragon skill tree and there are only about 5 branches. Wow, it's either going to take way too long for him to advance his skills, it doesn't, or he becomes stupidly powerful really fast. Also the women in this series follow their male dragon around like slaves pretty much. I'm no white knight but I do have limits. If you want a well written harem book series try Wild Wastes or Super Sales on Super Heroes.

So the long and short of this review is pretty straight forward. Usually i like to be neutral and fair, try to be as profession as an amateur who might just read a little to much can be. However, this time I'm just gonna say this from the gut. This book had potential, it checked all the right boxes of things I look for in a fantasy harem book. Hard on their luck but hard working protag, yep. Strong, smart and none whiny female accompaniment, double check. Over powered abilities in sight but gotta work to get them; you bet. Decent writing, fun jokes . . . . you get my drift.

So what happened? Well very simply I haven't been lectured on how to treat women and equality since i took a diversity class. I mean every thirty minutes it was something about "hey you know there are female gamers"; "oh you shouldn't cat call women" or some other ID political garbage in my escapist book. I do not need to be hit over the head with the happy white knight stick a thousand times because the writer doesn't want to be accused of being a sexist for writing a male orientated book with a harem in it! Serious there is so much of it in here it gets completely in the way the plot, I can't even finish this book with only 1.5 hours left because I'm tired of getting lectured on "how i can't speak for the female character because she her own person" and that's an actual quote from the book at Chapter 17 with 3 hours and 49 minutes left in the book.

So please to all future writers, leave your damn politics out of your books, I don't care, I'm reading a fantasy book so I don't have to think about the real world not to get hog tied and force fed your beliefs!

So dear listeners please don't buy this book. Skip it, there's better books out there that are no where near as preachy as this.

As a side note the narrator did they best they could do with what they got, but when i can hear even the narrator roll their eyes at the preachiness you know its bad.

I’ve been waiting to get this book for a while looking forward to it and now I got it I just have this big meh feeling about it, it had some interesting aspects but it’s not like I’m itching for more now, can’t say I would really suggest it or not.

This story is such a ripoff of The Valen's Legacy series that I am amazed the author hasn't been sued for copyright. The only difference between this and the other is the MC shapeshifts into a Werelion and his Harem is practically identical. I mean the MC in both stories is a Shapeshifting Uber Wizard, who was raised by a single mom and discovers his powers due to being attacked at random. He gathers a Harem and has grand adventures. Seriously, read this or The Valen's Legacy, but don't read both.

i don't think this should have been an harem setup

so the idea in the book is nice, the story is interesting, setup could be ok etc. so overall i would say a story I could have enjoyed.
female interaction and especially the sexual parts are just not for my liking, the wordings and explanations etc. seems kind of awkward and uncomfortable for me.

I’ve heard quite a few books with heavy sexual content, so it is not that I can’t enjoy that normally, it just seems like how a teenager would try to explain it to his friends while being kind of awkward and weird but trying to keep his cool…

So I think the book should have kept away from the sexual part of the haram and should have kept to how they want to screw him but never get to kind of thing… but that requires knowing how to write charming and alluring female characters which don’t seem to be the authors' strong suit.

It’s properly for a much different audience than me and might be really good for them :)

loved the story. already finished the series. I will listen to the series over and over.

This tale is an action-filled ride through the world of dragons and magic. The narration is great and keeps the story moving along nicely.

good book! cant wait to hear more of the story

I loved it! cant wait to hear more of this story. thank you all for it