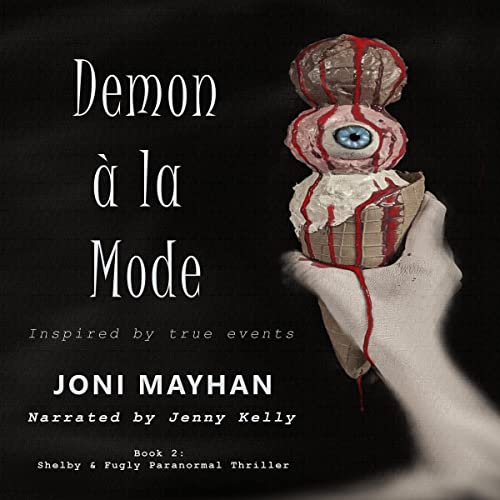 By: Joni Mayhan
Narrated by: Jenny Kelly
Try for £0.00

Shelby Moore is a location scout for a popular paranormal television show. While her job is to find haunted locations and turn them over to the cast and crew, she often finds herself in the center of danger.

In Demon à la Mode, Shelby scouts out the Demon Pit Haunted Hayride. Residing on a vast property that once saw sinister demonic cult activity, she comes face to face with the anguished spirits who suffered under a cult’s dark practices. In the late 1950s, the area was home to the town of Aurora. It was little more than a bump in the road, with a general store, a dozen modest houses and a church. If you drove through it, people would smile and wave at you from their perfect lawns. They might even invite you in for a glass of sweet tea and homemade apple pie. If you were smart and listened to the little voice in the back of your mind, you would just keep on driving. If you didn’t, you might have become the next sacrifice. Hidden beneath the wholesome façade was a world that few people could even comprehend. The town was a front for a demonic cult. More than a decade passed before anyone became suspicious. It wasn’t until 1955, when a visitor found a note tucked under his windshield wiper, that anyone had any idea what was going on within the confines of those 50 acres. He read the note and tucked it in his pocket, making hasty tracks to the nearest sheriff’s office. The note was written in a child’s handwriting, "Please help me. They won’t let me leave and they keep killing my babies."

As Shelby and her dog, Fugly, begin to scout the location, she quickly learns that the land is still saturated with negative energy and the ghosts of the past need help. After she is joined by the hosts of the show, handsome Brock Daltry and his snarky partner, Montgomery Snider, the activity escalates rapidly, leaving them fearing for their lives. What could possibly go wrong?