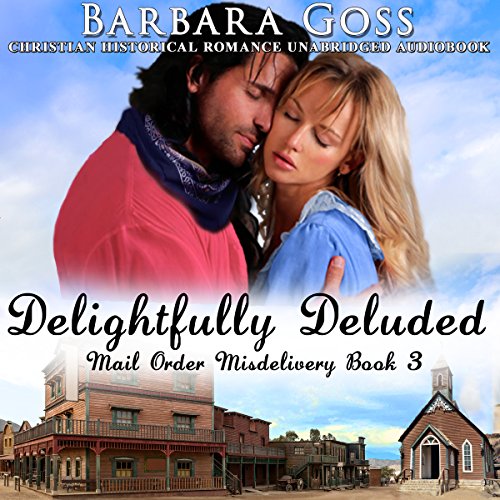 Can true love win against desperation, animosity, and deceit? Eden Jamison decides to become a mail order bride to escape her lonely life, and ends up with an undesirable intended. She manages to escape him by dressing as a lad and fleeing, but in the process, ends up owing a debt she isn’t able to repay—at least with money. Andrew Mayfield vows she’ll walk all the way to Hays with him, doing all the work along the way to repay him. Andrew is furious with “Eddie”, and Eden finds Andrew bossy and irritating. When he discovers her gender, he softens somewhat, and during their travels they grow closer, however, Andrew already has an intended waiting for him in Hays.

What listeners say about Delightfully Deluded

I liked listening to this book. It has a typical Barbara Goss characters of strong females who know what they want. I did feel that the main character was naive at times and I thought that she would have learnt her lesson but unfortunately not. However, she is a head strong character and I believe that she did not think things through and that is why she ends up where she did. Saying that I liked that she took action instead of sitting there to be rescued.

Delightful from start to finish

Mail order brides have such a hard life never knowing if the one they pick is real or not. What if you became one travel so many miles to find out this is not the man you thought he was? You really have to wonder how many times this did happen and just what the poor women did. Come take a listen about one woman who found the man not to be who he said he was and wanted way more then she was willing to give as she takes off running as fast as he can She finds she might have jumped from the frying pan into the fire as she tells one too many lies to get away from her groom to be. What you will find between these pages will make you laugh, want to cry as you hold your breath wondering just how can it get any worse as this author weaves her way right in to your heart with a plot that makes you want to close your eyes an pray.

Ms. Kelly does a wonderful job narrating from her wonderful character voices to the delightful emotions she puts into her audios. You can hear the emotions that each character is going through as well as the fear, happiness and sorrow they must go through. There are no background noise, no repeating of words, no volume changes. If any breaks were taken I could not tell. I always knew who was talking, what they were going through. She really brought the characters to life pulling me in and painting a picture I could see in my mind. I could really hear the desperation in Eden’s voice and the angry at being dupe in Andrews’s voice. This is a very clean, crisp audio that is very realistic that you almost feel like you are watching a movie. I really enjoyed how she show the sparks flying between these two and how she really brought out their true feeling for each other and other characters. Her male voices were just as good as her female voices. I totally enjoyed listening to this audio.

What really made this audio for me was how realistic the scenes where, this is a very believable story that really touches you heart. It is about what one woman is willing to do to get away from a man she can’t trust to find a better life for herself. She doesn’t plan things out very well and gets into one mess after another with lies on top of lies. One man who does a good deed wishes he has looked the other way. It is so true no good deed goes unpunished but in this case the plot thickens as Andrew has to deal with his own issues of what he has waiting at home for him. I really liked the preacher and his outlook on marrying mail order brides as well as his mother and her matchmaking ways. There are many twists and turns with danger around the corner. There was a time or two when my heart was in my throat. It is a very well thought out story that holds the listeners attention getting you involved yelling at the characters. I totally enjoyed it from start to finish and really wished all mail order brides who find their selves in a mess had an Andrew to save them.

This is my favorite story in the series, thus far. I really enjoyed the characters and their humorous antics; there were several moments that had me, literally, laughing out loud. I rarely listen to books a 2nd or 3rd time, however, I’m considering doing just that with this book. It’s just a charming little story that lifts the spirit. Meghan Kelly, as usual, did a fabulous job with the narration. If it’s not clear, I absolutely recommend this book! I received a review copy at my request and voluntarily reviewed.

Another fantastic book in this series, you really cant go wrong with a Barb Goss book and most certainly not one narrated by Meghan Kelly.

This is an interesting story about women in trouble looking for an escape out of her circumstances. She is on her way to better life. Story dwells on women position in the world. The book is 3 hours and 38 minutes long. Quiet pleasant to listen. Nice, eventful story. Intrigue, travel, search, emotions, marriage, friendship, a little bit of everything needed in the great book.
I liked the narrator. Meghan has a pleasant voice, which compliments the book. She changes voice accordingly to the different characters. Meghan changes speed, intonation, the color of the voice so you have an impression of looking the movie, not just listening to the book.
Recommended to listeners looking for leisure time literature.

&quot;This book was given to me for free at my request and I provided this voluntary review.&quot;

Delightfully Deluded is a sweet romance full of loveable characters. Eden’s story is a rollercoaster ride full of one unfortunate event after another until Andrew swoops in. Andrew’s nice deed leaves him in a tight spot and far away from home. Crossing paths with Eden has forever altered his life’s path and has Andrew questioning his current plans.
I was delighted that, although I haven’t listened to the first two books in the series, it was great as a stand alone. I definitely plan to check out the rest of the series and Barbara Goss in the future. Meghan Kelly does and excellent job with each character depiction.

Talents of Goss and Kelly Make This a MUST READ

The Talents of Barbara Goss and Meghan Kelly Collide Again in This Must-Read!

Another winner from the talented writer Barbara Goss and the wonderful performance of the exceptionally talented Meghan Kelly! A duo made in audio heaven. :-)

Eden is desperate to escape 'her match' in her mail order bride contract. She runs away and makes it to the train station. Since she has no money she must figure out a way to come up with train fare. Andrew kindly offers to get her a ticket but when he finds out that she isn't who she presented herself to be and has no money to repay him, things get very tense.

I didn't really care for the character, Eden. At first, she was a lovely and sympathetic character, but as soon as she is found out by Andrew she turns into an entitled and demanding brat. Andrew is a St. to put up with her – in my opinion.

Meghan Kelly is a top-notch voice performer. I know that she will soon be narrating books for well-known authors, never forgetting those who give her an opportunity now. 5 star performance

Credit worthy? Absolutely. Barbara Goss' stories are written for those who want romance but not the graphic or innuendo that come with a lot of books, currently. She sets up a romantic situation and let's the listener paint the picture of what might happen next.

If you found my review helpful, please note: I get to review copies of audiobooks in exchange for a review. I also write reviews about the books I purchase, so please look for those as well. DELIGHTFULLY DILUTED Is a review copy.You may select' helpful' below if you found it helpful. Also, I invite you to follow me on Audible. Thank you!

This book is fun!

Being a mail-order bride must be such a difficult thing. It seems so old fashioned and yet still happens today. This story highlights so of the problems, you have no way to know what kind of person you're going to meet, or if you'll get a long let alone find love with them.

In this story the matched are far from smooth and there are repercussions that create some very funny moments.

If you've read other books in this series then you'll have a good idea of what to expect. This book is written in the same style and has many of the same characters.

The narration was well done with great character voices and good conveyance of emotion.

I received a free copy of this book from the author and/or narrator and/or publisher in exchange for an honest review.

I like books about mail order brides. These women had to be brave and tough. This book has quite a twist and is well worth the read. Meghan Kelly does a great job performing and makes it an easy listen.

I received this audiobook free for an honest review. I thought this book was pretty predictable, however, these kinds are. The author did a good job of keeping your attention. The narrator did a good job with the different characters. There wasn't a lot of depth to this story, but that isn't what I expected it to offer. It was exactly what I thought it would be, based on the title. A light, enjoyable romance.

God can do anything even when all goes wrong .

This was a great, short book. I love books containing stories from the old west, and when love, mistaken identity, mishaps, along with Christian values are involved, well all the better. A clean, enjoyable book in a series involving a different spin on mail order brides. Enjoy!!