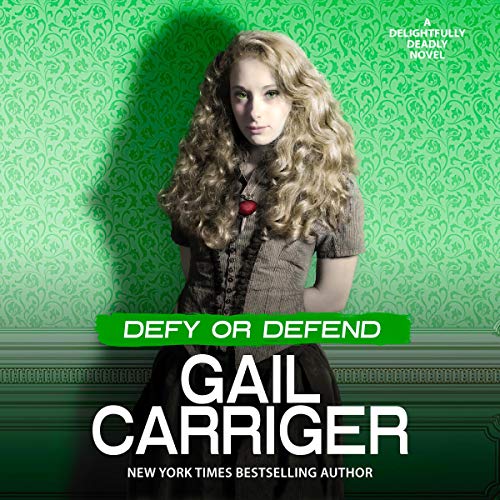 Narrated by the wonderful Emma Newman.

Dimity Plumleigh-Teignmott, code name Honey Bee, is the War Office's best and most decorative fixer. She's sweet and chipper, but oddly stealthy, and surprisingly effective given the right incentives.

Sir Crispin Bontwee was knighted for his military service, but instead of retiring, he secretly went to work for the War Office. Mostly he enjoys his job, except when he must safeguard the Honey Bee. Neither of them are vampire experts, but when Nottingham Hive goes badly Goth, only Dimity can stop their darkness from turning bloody. And only Crispin can stop an enthusiastic Dimity from death by vampire.

In a battle for survival (and wallpaper), Dimity must learn that not all that sparkles is good, while Cris discovers he likes honey a lot more than he thought.

Spinning off from the Finishing School series, featuring deadly ladies of quality, this story stands alone but chronologically follows Poison or Protect. It's Cold Comfort Farm meets Queer Eye meets What We Do In the Shadows from the author of the Parasol Protectorate books, perfect for fans of Julia Quinn, Jodi Taylor, or Meljean Brook.

Delicate sensibilities? Contains fraternizing vampires and one very curious young lady, who asks about it, sometimes in detail, but mostly in retrospect. May also involve excessive use of velvet, melodramatic poetry, and the strategic application of interpretive ballet.

What listeners say about Defy or Defend

As always, Gail Carriger has hit the spot again. An extremely engaging, entertaining book with much humour. You do not need to have read Gail's other books to listen to this, but I would recommend doing so, or check out her website to understand the world she writes about if you, as I do, like to have background. I can't think of a single one of Gail's books which I have not enjoyed - although to be honest I prefer reading about the characters from the Finishing School series as adults. Emma Newman does a very good job of narrating too. If you like the quirkier side of vampires and steam punk then this may be for you.

Just what I needed - to spend more time with Dimity (and her sparkles) and in Gail's inclusive, positive, witty world ✨ Really enjoyed the story - laughed out loud so many times - and the performance by Emma Newman. Thank you Miss Gail!

excellent addition to the parasolverse

I have loved all the books based in this universe but ive always had a soft spot for Dimity and I'm so glad she got her own book, it's a little more straight in there with the romance than some of the others, both characters tell you they like each other pretty much the second you meet them, but you dont get frustrated waiting for them to get together as there is so much else going on. Would reccomend reading the finishing school series first to get to know Dimity, however its not strictly necessary, this book could be read without reading any of Gail's other books.

Delightful and just a little silly

This is wonderful, lighthearted, kind, and just a little silly - like Dimity herself. It’s a story of intrigue and occasional peril, where bustles save the day. And best of all, it features Pillover!

The first Carriger books I actually read were the Finishing School series, and Dimity was my favorite character, so I was very excited to see that hers was the second Delightfully Deadly novella! And it really is as delightful as I would expect from a novella with Dimity as the heroine! It's nice to see her as an adult and how she's grown and changed, and stayed the same as well. I also adore her moniker- it suits her so well! Crispin is very sweet and so very repressed, and I for one spent the novel supporting Dimity's determination to climb him like a tree.
I also really loved the way Justice was handled as a character, and of course seeing little cameos of Lord Maccon and Pillover, and mentions of Sophronia and Soap, Sidheag, and Agatha!
The narrator did very well, but sometimes her voice changes were a little subtle for me to catch which character was speaking, and there were a few places where she said the wrong character's name in a scene or seemed to stumble over a word, but nothing major and it didn't really pull me out of the story.

I love the finishing school series, so it was fun to have an epilogue for the characters. however I was disappointed by the reader not getting the names correct... other than that it was a fun listen

so enjoy these characters

great fun. enjoyed the storyline and characters ....happy to know Dimity found her knight, but was able to use her"Intelligencer" skills

As always, Gail Carriger has swept me into her fabulous world. This book really kept my interest and had me smiling and laughing with pure enjoyment. Brava!!!

I'm a fan, but this one is skippable fluff

The best Parasolverse books pull off a rare balancing act: they're both broad satires of a genre and stirring examples of the genre. You care about the characters and get caught up in their adventures and romances, even while the humor pushes the limits of the ridiculous. Not "Defy or Defend," alas. It's all fluff, all arch whimsy, all Parasol and no Protectorate. It's harmless and occasionally fun, but a bit tiresome and utterly forgettable--which is fitting for a book focused on Dimity, who may be the most forgettable major Carriger character.

This is no exception. I'm fond of Sparkles from previous books and so glad to see her find happiness.

Full of deadly delight, as expected

Delightful as always, excellent narration (weird pronunciation of Sidheag aside), made me laugh several times. Racy, but not enough that I was embarrassed to listen in mixed company!

I love Gail Carriger and had a blast checking in on adult Dimity! Every single time a new story comes out, I want to revisit Saphronia and Soap and Alexia and Lord Maccon and Biffy and Lyall and, of course, Lord Akeldama. Fun, sweet, silly, romantic, inclusive, and progressive. These series’ never fail to make me swoon and smile.

Ms. Carriger has created an utterly lovely novella in her Parasol Protectorate universe - again!
This wonderful novella has love (of all kinds) intrigue, gossip, vampires and a favorite werewolf of mine.
I could hardly put it down. Will definitely recommend it to any and all interested in inclusive, sparkly, steam punk romance.

I love getting a chance to find out what happened to all of the Finishing School characters. As Gail says, it's always fun to spot characters from other stories in the background. It's a wonderful universe she has made, and I enjoy spending time in it.