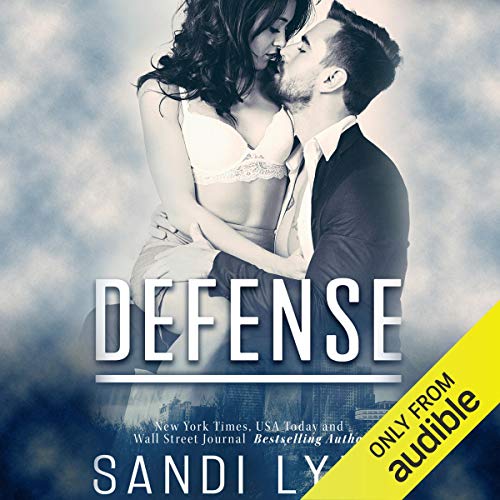 Betrayal. The pain and rage that consumed me was unbearable. My perfect reality had become my hurtful one. Loss of illusion settled inside me and constricted the air I breathed. I felt as if my entire life was a lie. Fresh out of law school, I needed a new start and to put the pieces of my life back together. When I left Boston and moved to New York, I met Luca Russo, a high powered, sexy attorney who liked control. He took me under his wing and did things for me no other man had ever done. Everything comes with a price, and mine was falling for a man who couldn't return my affection. Then one night tragedy struck and he needed my help. That was the night I became his defense.

There wasn't anyone or anything I couldn't control. I thrived on it. It made me who I was. Some called me ruthless because I played dirty in the courtroom, and some called me a man-whore because I liked to sleep with women but refused to give them anything more. I was a 30-year-old man with the world at his fingertips. I had a successful career that I loved, a luxury apartment on Park Avenue, and the company of any beautiful woman I wanted at any time. Then Ariana Williams walked into my firm and left me breathless. The chemistry between us was undeniable. But I had a past and a secret I never wanted her to know, so I had to walk away. Then one tragic night I needed her, and now she holds the fate of my life in her hands.

What listeners say about Defense

I liked the general plot ideas, but the plot details and the writing style had me rolling my eyes too many times.

The sexy times were kind of PG.

A partner in a prestigious law firm is charged with murder, and he hires a lawyer who passed the bar the week before? [Eye roll.]

The lawyer with no court experience decides to "wing it" with their opening statement and not write it down, despite the pleas of the client who is also a famously successful trial lawyer, and she shuts down the conversation with "Don't you trust me?" [Eye roll.]

The most incompetent attorneys ever written

I have tried starting this review several times, but words fail me. I know this is fiction, but if you are trying to portray a great defense attorney, you should at least try to make him/her more credible.

I believe that a regular person with no background whatsoever into law who has watched any TV show that includes a murder investigation would have done a better job than the lawyers portrayed in this story. The behavior of the characters is simply not believable. And not even the sexy times, which at some point shouldn't even be happening under the characters' circumstances, seemed forced.

The whole thing was ridiculous.

I would not recommend this audiobook.

the female narrator ruined it for me. voice grated on my nerves and I couldn't distinguish between her speaking for a man or woman. felt like she was speaking to herself. and the book was very predictable

Sandi Lynn always writes really hot books but this one was more on the sweet side and definitely more on the legal side. I enjoyed it. It was exciting and I finished it in one sitting, not wanting to turn it off. The only issue I did have was that I did felt a slight drag in the middle but after that hump, it was great and I loved listening.

Veronica Worthington was fantastic. Perfect for this character. Very serious when she needed to be, very sexy when she needed to be. Her pacing was on target and her tone was great. I have less accolades for Tyler Donne. His voice sounded a little too old, which would be ok but he would pause is weird areas and then not pause between narrative so I would never know when a character changed speaking. It made it difficult to follow along. But overall the narration wasn't too bad.

Very exciting story. The voices were great and added more excitement to the story. Would recommend it for sure!

Opening a book by Sandi Lynn is a treat for me, her stories never failed to make me happy. Some murder mystery, some courtroom drama, intelligent, sexy attorneys, yes please. Very enjoyable read.

So much potential ***Spoiler Alert***

This story had so much potential but it was hard to ignore the parts that were just unrealistic.

First of all what lawyer in their right mind would buy so many lavish gifts for someone that he directly hired directly promoted and ended up sleeping with?!?! and even though as far as to hire her has his attorney for a murder trial even though she's fresh out of Law School.

and let's talk about that trial. there were so many legal inaccuracies that it just blew my mind. I'm not even a lawyer and even I know the way she obtained evidence is just not possible. high-profile case or not there is no way a murder trial would be tried within a few weeks of an arrest.

the story had so much potential but it was very very hard to ignore all of these inaccuracies. I like getting lost in the books picturing it as if it were happening but that's impossible to do when most of the storyline is just unrealistic.