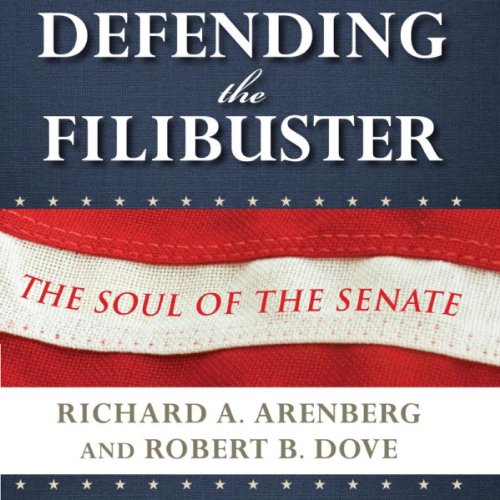 By: Richard A. Arenberg, Robert B. Dove
Narrated by: Kevin Pierce

Recent legislative battles over healthcare reform, the federal budget, and other prominent issues have given rise to widespread demands for the abolition or reform of the filibuster in the US Senate. Critics argue that members' traditional rights of unlimited debate and amendment have led to paralyzing requirements for supermajorities and destructive parliamentary tactics such as “secret holds”.

In Defending the Filibuster, a veteran Senate aide and a former Senate Parliamentarian maintain that the filibuster is fundamental to the character of the Senate. They contend that the filibuster protects the rights of the minority in American politics, assures stability and deliberation in government, and helps to preserve constitutional principles of checks and balances and separation of powers. Richard A. Arenberg and Robert B. Dove provide an instructive historical overview of the development of Senate rules, define and describe related procedures and tactics, examine cases related to specific pieces of legislation, and consider current proposals to end the filibuster or enact other reforms. Arguing passionately in favor of retaining the filibuster, they offer a stimulating assessment of the issues surrounding current debates on this contentious issue.

“During my years in the Senate, I learned that you should never get involved in a legislative fight without Bob Dove's advice on counsel. Nobody knows more about the rules and history of the Senate than he does. Defending the Filibuster: Soul of the Senate should be required reading for anyone who wants to understand one of the hallmarks of our democracy.” (Bob Dole, former United States Senator )
“In this excellent volume, two extraordinarily qualified Senate veterans explain and defend, with clarity and impressive research, the Senate filibuster. With their deep understanding of, and respect for, the institution of the Senate, they point to the need to protect minority rights and to build consensus - and they propose evolutionary reforms to reduce filibuster abuse. This book deserves to be read and considered carefully by all who respect, and want to understand better, the world's greatest deliberative body.” (Lee H. Hamilton, former US Representative and Director of the Center on Congress at Indiana University)
“Regardless of whether you agree with [the authors'] conclusions, the book will be a must read for anyone who wants to be a part of the debate about how to improve the function of the Senate.” - Roll Call
“An historically grounded and eloquent defense of the Senate's tradition of protecting minority views by allowing extended debate until sixty Senators vote to end it.” – U.S. Senator Carl Levin

What listeners say about Defending the Filibuster