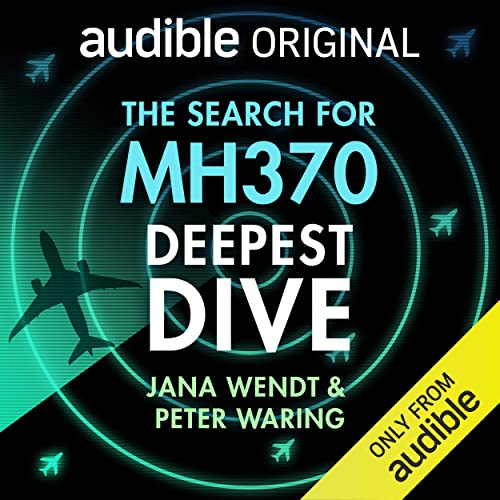 What listeners say about Deepest Dive

Compelling - I had to listen to all 8 episodes in one session.
Why does Audible want 2 more words before I can submit?

The best look at what happened to MH370

A brilliant and compassionate look at the disappearance of MH370 and the subsequent search.

The hosts explore all the events surrounding the disappearance and the search but never lose sight of the victims and their families, putting their stories at the forefront of their investigation into what happened to MH370.

While this is a a comprehensive overview of the mystery surrounding MH370, it also never forgets the human element and the ongoing suffering of bereaved families. It's also a fascinating insight into the processes and politics behind the international search effort for the plane. Would absolutely recommend!

I couldn’t stop listening to this… in particular, the last chapter refers to a theory put forward by a Boeing pilot….. compelling listening and utterly tragic… those poor souls

Listened to all eight episodes in one day. A must listen! Highly recommend .hope there’s an ending soon

A textbook example of how to deal with a sensitive subject, but still making it compelling listening. A Podcast with brain and heart. Which is a rare combination.

I only listened to the last episode, which was fascinating and compelling and convinced me that this is the most likely scenario. One unhinged psycho pilot that planned and executed precisely. No complicated conspiracy needed

Gripping from the start, a complex investigation into the disappearance of flight MH370, right up my alley, Loved it.

brilliant podcast... really informative
couldn't stop listening!! some great theories about the disappearance of MH370 and the hosts are sensitive about the loss
totally worth a listen even if just remotely curious

At the end of the podcast follow the instructions…..
And say a silent prayer for all the lives lost

There is no chronology, there is no science there is no anything. It's just a podcast salad stitched together from completely unrelated pieces. The only saving grace is listening to the family members whose grief no one can even imagine. The rest? Nothing. Just nothing. CNN on steroids. Why did you even bother? Oh and how in the name of everything that's holy did you manage to tie Trump into all this. That right there discredits you from the jump. You just had to virtue signal. Couldn't resist? Mind you if his alleged involvement was backed with evidence and well reasoned, I'd be all for it. But this is like - oh and then right after I saw the plane go down I saw Hitler walking by and he had this evil grin and that's what happened!!!!!!111 This thing is simply worthless for anyone that has any aviation knowledge and has been following this case. Sorry but you contribute exactly nothing.

Great production by people without a clue

Use the amount of fuel on board, the range of the aircraft flying at standard altitude and standard speed and then draw a line. With the starting point and the line, you can derive the speed... Uh, just a bit circular? Either the producers failed to explain the process or the expert waved his hands and amazed a bunch of morons.

So, the pilot probably suffocated the passengers. Did he put a laxative in the co-pilot's coffee and wait til he ran to the head? No theory of how the pilot might have dealt with the other cockpit crew?

The more I think about this effort, the more I realize it's a whole lot of flash with little information. Great production of a mayonnaise sandwich.

This was a different kind of podcast. Normally, I enjoy these, but this was just a never ending series of scenarios, interviews with experts and talks with relatives of the missing. Despite numerous searches, the plane still hasn’t been found. Kind of hard to listen to.

listened to all the episodes in one day. heartbreaking story - i thought they did a good job of looking at all sides and what might have happened to this flight

Podcasts are not usually my thing. I could not stop listening!

Someone needs to make a miniseries. A movie could not do it justice.

I'm always curious as to what happened to that plane and those poor souls and crew. This book doesn't disappoint. Narrator is easy listening, too.

i found this fascinating. of course the story will always be a mystery for adults at the time of the disappearance. it was all the theories that were so interesting. i never heard about those in the press. will also always be a sad, sad story. blessings on the families and loved ones of all aboard.

I was fascinated by the content and couldn't stop listening. Very well done. Thank you.