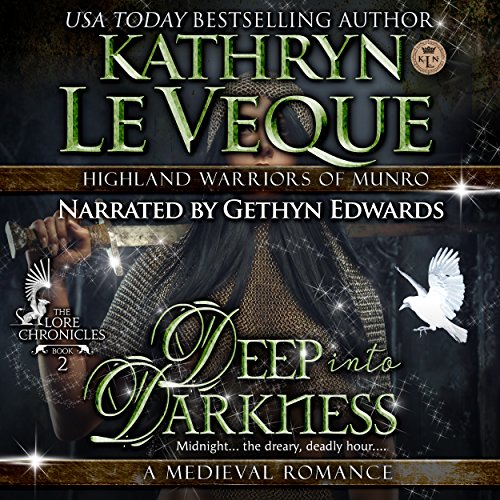 By: Kathryn Le Veque
Narrated by: Gethyn Edwards
Try for £0.00

AD 1298 - Findlater Castle in the Scottish Highlands becomes a place of mystery and doom for Jamison Munro and his wife, Havilland. Traveling across the highlands one dark and stormy night, they stumble upon a lonely Host in Findlater Castle, a pathetic soul waiting for his wife to return to him. It is a terrible tale of a tragic love story that the Host tells the travelers but when Havilland becomes curious about mysterious tapping sounds that go on in the middle of the night, she soon realizes the danger that she and her husband are in. It becomes a race against time for Havilland to free a trapped spirit and save both their lives in the process.

What listeners say about Deep into Darkness

very well read. loved every tense moment.
Up to Ms Le Veques usual standards. will look out for more.

I was primed for this listen because I had first read Deep into Darkness in an anthology, titled Once Upon a Haunted Castle released just before Halloween last year. Narrator Gethyn Edwards did the story justice and then some. Superb in the telling, and the reading of the poem, well, it is over the top!
Heather works at a show called “World’s Best haunts”. She and another woman, Lynn, travel to sites where history speaks of haunts, hence, that’s why she’s in a village close to Findlater Castle, trying to discover something about the castle.
The sound effect of wind blowing and a plodding, slow drawling voice put me on edge. I soon snap out of it because I’m suddenly in Three Kings Inn with Heather and Lynn waiting for the local guide to take us out to the castle. We ply ourselves with beer, giggle a lot and wait. When an interesting type walks into the inn, we strike up a conversation with him. Since our guide didn’t show, we’re hoping the man may know of some of the legends surrounding the castle.
He’s well acquainted with the legends and the poem, The Raven, by Edgar Allen Poe, associated with them.
“Because I taught such things,” he said. “I taught literature at the University of Edinburgh for many a year. I know Poe. And that tale is about Findlater Castle.”
“That’s amazing,” she said. “Then you must be an expert on the legends around the castle. I mean, living here and all, you must know everything about it. What’s the story behind the woman who wanders the grounds in chains, looking for her long lost love?”
The old man snorted. “Poe took that legend and twisted it,” he said. “He wrote about a man longing for his love, Lenore, but that wasn’t the truth at all. There is tale of a woman who wanders the ground, looking for her lost love. That’s Lenore.”
We aren’t put off by the man’s warnings to stay away from the castle, rather we are more intrigued than ever. We want to find out if it is haunted and plan on visiting the castle the following morning.
The poem is one the author likes very much, so it’s equally interesting to see what she does with it in this story. She takes the idea that the narrator of the poem is going mad. Why? 1) His longing for his lover, Lenore, 2) The constant tapping of the raven.
At the end of the novella, Le Veque has included the full poem. Narrator Gethyn Edwards brings this poem to full-living color. I, simply, love it. And yes, he does sound a bit mad!
Lady Havilland and Jamison Munro make an appearance in this novella and driving the story forward. They are the hero and heroine of The Red Lion, released October, 2016. In the year A.D. 1290, they arrive at the castle, cold, hungry, and drenched with rain. Jamison is fighting a high fever, but determined to keep his lady fair safe. The circumstances would appear normal enough, if not for the host and his man-servant. Both are just plain spooky! The raven who joins them, flies and squawks as raven's do. Lady Havilland is no weakling in her own right. She hears tapping late at night and is curious to know where the tapping is coming from. While her husband is sleeping, filled with mulled wine, she follows the sounds and discovers something so unbelievable she is in shock! I’m sure I’d be sniveling under the covers, snuggled up to Jamison!
This story is not the normal Le Veque read, but it is an amazing piece of work. A true page-turner! I dare you not to read or listen to it.
Oh, I absolutely love the way the story ends. We get our happy ever after!

An engaging and intriguing story.

I recommend this approach to this tale, as the effects incorporated with sound and the Narrator's skill at portraying graphic scenarios by his reading gives a very entertaining and enthralling experience.
Hard to say if the Poem "The Raven" from Edgar Alan Poe was based on the Scottish legend, or the tale being told in the volume, is based on the Poem. Either way, it is a story well told, pulling the arm chair voyeur into a tale of madness and death.

Different, Could Have Been Great

This book is Edgar Allan Poe meets Kathryn Le Veque. What can I say, it was different.

There are ugly, mean, self-centered characters. The action in the village is written without fluff. Conditions are dire! The few good characters have to navigate through and around many challenges. At the end however, to quote the raven, "Never more."

The surprising adventure of Clan Chief Jamison Munro and his wife Lady Havilland on a deep dark stormy night as they travel home to Scotland that becomes a fearsome night fraught with the Raven and a Host out of horror tales. With Jamison sick with fever and things not quite right that set both of them on edge morning can't come soon enough of will it?

This was a wonderful ghost story. The Raven was a poem I loved. I visited Edgar Allen Poe's grave.

The entire story could have been told in 100 words or less. First part and last part could have been eliminated, as they add nothing to the story. They seem to have been more of an afterthought to bracket the short story. between.

Struggled to finish. Not one of my favorites.Not the kind I am use to reading by her.