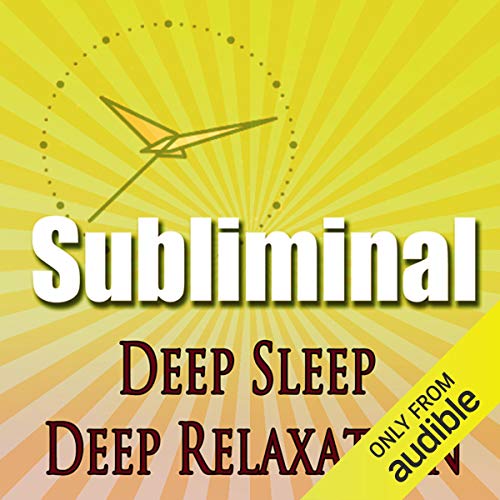 This subliminal hypnosis program is the answer to all your sleeping problems. By using subliminal techniques, your subconscious mind will receive subliminal messages that will allow your thoughts to calm themselves and let you relax deeply so that you can fall asleep quickly and stay asleep. Even power naps will become more refreshing as you learn how to fall into a deep, relaxing sleep that will leave you feeling recharged and rejuvenated even if you are only asleep for a short time. All you have to do is sit back and relax, and let your subconscious mind do all the work for you! Don’t wait another day. Today is all the time you need to start making positive choices for incredible change!

The sounds of gentle rain and hypnotic suggestions distract an overactive mind and bring sleep.

everything is better with binaural.

The structure of this audio book is fantastic.

It guides the listener through a deep and powerful meditation encompassing binaural beats that effectively move you through the piece.

Gives a great sense of ease and comfort. While at the same time inducing a trance like state.

I love the backward subliminal - theory and application.

Great use of an Audible Credit.

This is a SHORTENED version of the complete album that's also available on Apple's iTunes but NOT available here in Audible!

Has Deep Sleep Deep Relaxation Subliminal turned you off from other books in this genre?

There's only 4 chapters with Ch 1 as the Subliminal instructions. The subliminal messages are in Ch 2 but NOT Ch 3 or 4.The FULL version on iTunes are broken up into 12 chapters and the running time is at least Doubled! Worse... the cost was almost the SAME!Only Ch 2 will help with the subliminal messages which is basically a deep whispering on top of the music in various spots. Ch 3 & 4 contains light music for you to fall asleep to.Spent a few days listening only to Ch 2 and finally able to fall asleep. Sad part is that my internal body rhythm has me waking up early ~6-6:30a every day so I can't just sleep in. Have to wake up first then fall back asleep on the weekends.At least I can doze off slightly better now.

Could you see Deep Sleep Deep Relaxation Subliminal being made into a movie or a TV series? Who should the stars be?

This is somewhat of a rip-off in the

This terrified me! I agree with the other two people about this, it is really scary! If you have PTSD I would not recommend this at all!

I agree with Kathy - this audio gave me nightmares! I thought it was maybe just coincidence, but after reading Kathy's review, she confirmed my thoughts! There's one part that has a really creepy sound that is like a screeching noise - it is only played once, and you have to wonder what that is all about. It makes me jump when I get to that section. I did listen to it for over a month, but just could not handle the very graphic, scary nightmares anymore, so I have stopped listening. NO MORE NIGHTMARES!

Relaxing or Primal Fear Inducing? You tell me!

What disappointed you about Deep Sleep Deep Relaxation Subliminal?

I am no stranger to hypnotic, subliminal relaxation, but this is the most horrid and frightening voice and 'music' I have ever heard!. Seriously frightening to hear this narrator's maniacal voice. I had my husband listen to it and he had nightmares! Had my 12 yr. old son listen to a few minutes of it to see if I was imagining things, and ended up having to let him watch an extra 1/2 hr. of TV to get it out of his head.

What was most disappointing about Subliminal Hypnosis’s story?

It gave us nightmares! Background sounds like rain falling on concrete with a loud, annoying bell being struck repeatedly. Lonely, dark, terrifying. The maniacal voice droning on in a creepy tone. Seriously creepy! I know this is my 'visual' of the sounds, but there is nothing else to compare them to. I tried a Tibetan Monastery in the rain...nope. Beautiful sounds in a mountain cabin with rain...no. Just lonely sounds from a deserted shipyard on Elm Street, where you're being hunted by Freddy.

At first I thought it had to be a joke, but no, it went on and on like a scene from a slasher movie. I would have cut the entire thing and tried again, unbelievable it made it this far. Who edits this stuff, Jason??

If you could play editor, what scene or scenes would you have cut from Deep Sleep Deep Relaxation Subliminal?

Every last one of them

STAY AWAY! Seriously, stay away.

helps me get a deeper sleep

This really works 99% of the time. The longer you use it the more effective and automatic it becomes.