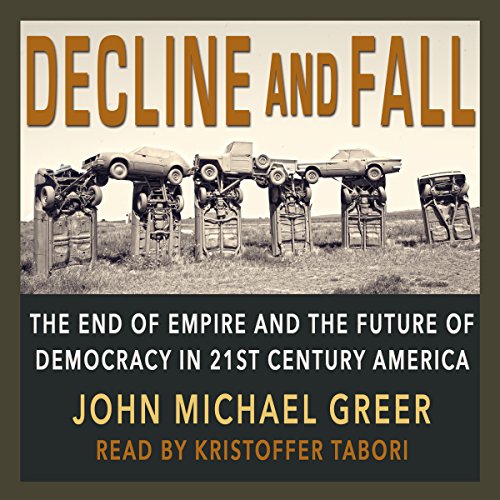 Although he was writing nearly a century ago, William Butler Yeats could just as easily be describing the United States today. The decline and fall of America's global empire is the central feature of today's geopolitical landscape, and the nature of our response to it will determine much of our future trajectory, with implications that reach far beyond the limits of one nation's borders.

Decline and Fall: The End of Empire and the Future of Democracy in 21st Century America challenges the conventional wisdom of empire. Using a wealth of historical examples combined with groundbreaking original analysis, author John Michael Greer:

By shifting the conversation from whether today's American empire should survive to whether it can survive, and arguing persuasively that the answer to the latter question is "no", Decline and Fall makes an invaluable contribution to the body of speculative post-industrial literature. This book is a must-listen for anyone concerned about the state of the Union, or who believes that the time has come to reinvent the American Dream.

John Michael Greer is a scholar of ecological history, an internationally renowned Peak Oil theorist, and the author of more than 30 books, including The Long Descent.

What listeners say about Decline and Fall

I am a history buff, follow politics (left leaning), globally traveled for work (i.e. aware of what it is like to live outside the U.S.) and an Engineer. I am no fan of doomsday prognostication - especially from right-wing, gun-toting nutcases, but I sincerely believe the author is correct about the near future for U.S. citizens and I plan to prepare for a significant economic "correction" and permenant decline in lifestyle. Not planning on armageddon but it is a good time to learn to live with less. I've enjoyed five plus decades of relative prosperity but the party has to end some time.

Lots of great information and a good historic underpinning for the overall theme of the book but why is he still stuck in pre-1971 economics? The USA went off the gold standard in 1971 and 8 would agree with the author's premise if we still were on the gold standard. This is a good read anyway but a bit too neoliberal for my liking. otherwise he's spot on. #LearnMMT

Everything you need to know about America

A page turner despite its heady topics of Politics and reform, American history, the environment.

The Concise Big Picture View of our Future

Would you consider the audio edition of Decline and Fall to be better than the print version?

The print version might be slightly better, only because the book contains such a stunning wealth of new models for understanding the process of decline of our empire that I would have liked to stop reading or scribble notes in the margin.

What does Kristoffer Tabori bring to the story that you wouldn’t experience if you just read the book?

Kris Tabori has the right sort of matter-of-fact voice for this book. He takes his time--much appreciated.

This is such a rich book that I was glad that my 30 minute commute forced it to be split up. I found myself mulling over the new information throughout the workday.

This book starts with a big-picture view of how empires have worked throughout history, and how they decline. The author then takes this concise overview and applies it to the American experience of empire, making reasonable projections about what's likely to happen in the next 20 to 50 years. You can delve into the details of empire in more depth by reading Oswald Spengler's "Decline of the West" and Toynbee-- And certainly I'd recommend them-- But if you want the bottom line on your next 20+ years, this is the book to get!

For the audio book the worst part of the book as the voice actor. He went full old man wizard voice, never go full old man wizard. He let up after a while, it was probably killing his voice right a long with my ears.
The book it self is a deep dive into a very different perspective on the challenges facing our current times but if you are ready to swim then jump right in!

a great book with a wealth of information and some wonderful insights. i loved it!

Read it - it will change your life and thinking.

If there were any tickets for people to get off from the Titanic before it sailed away to it's last voyage - this book is exactly that type of ticket. The book that everyone should read and be aware what's ahead in the store for the U.S. and have some time to prepare for it.
I have three copies of the book to lend to family and friends and I just got the audible version.

Throughout the first couple chapters I almost gave up on this book. The reader's voice was a little too nasal for me and the cadence didn't flow that well. Couple that with I disagreed with some of the author's interpretations of pre-World War I/post-World War I history and I struggled to get through those first 90 minutes to two hours, but I agreed with the premises and by the end I was convinced the author shared some valuable insights with his readers. I think the author lays out a good road map for the future even if I didn't necessarily agree with how we got to today. That makes it a book worth reading, in my opinion, but be prepared for a reader that was a bit tough to listen to. You might want to sample before buying.

Great and interesting book, that makes you rethink a lot of assumptions about our future

I usually don't write reviews, but I had to for this one because it was so good.