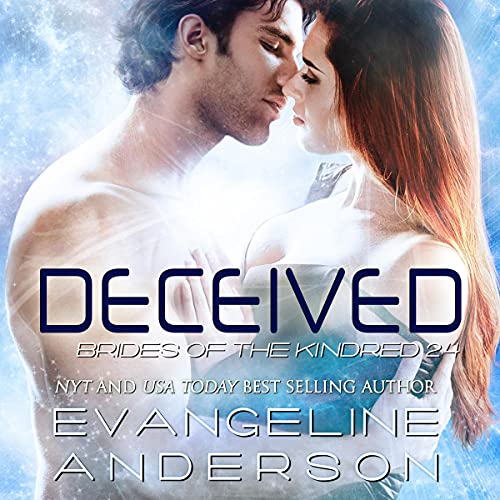 By: Evangeline Anderson
Narrated by: William Martin
Try for £0.00

A Warrior who must hide his identity to rescue her.... Can Anna forgive Dark when she finds out she has been...Deceived?

Anna is living in a nightmare. Stolen by raiders from the arms of her loving family, she is bought by a hulking, two-headed Trollox. She wants to die until her thuggish captor buys a new robotic cook who also doubles as a guard for the house. At first, Anna thinks he is just another Replicant, without emotions but soon she finds herself pouring out her heart to him. It’s safe because he’s just a machine so she knows he’ll never hurt her like a real male would. Is it wrong to think that she’s falling in love with him? Especially since a machine can’t really love her back…Dark is a Kindred warrior on a mission. He must steal the Shannom-rah, an ancient crystal capable of storing trillions of personalities, before the enemy of his people gets it. In order to do this, he has to infiltrate the home of the Trollox collector who owns the priceless artifact.

Posing as a Replicant, he is in the perfect position to complete his mission. But he didn’t count on finding a female in danger. Despite his determination not to get involved, his heart is torn by her plight. As his feelings of protectiveness for Anna grow, he longs to tell her the truth about himself. But he knows doing so will destroy her faith in him - she has been hurt so badly by living males, she can only trust him because she thinks he is a Replicant.

When the truth comes out will Anna still care for him, or will she feel betrayed knowing that she has been...Deceived?

*Author's Warning: Though I have tried to handle it delicately, anyone with a history of past sexual abuse may want to listen with care, because my heroine, Anna, is a survivor of a sexual attack. I don't write this kind of book lightly or gratuitously, I wanted to write about love and hope and healing and redemption. I hope I have achieved that goal with this book, and that it will bring hope to others.

What listeners say about Deceived

The descriptions given of creatures and odors is so graphic that I can see, feel, and smell it. William does a good job with the characters except for Sophia’ voice; that voice is so mousy and irritating. There were so many twists and turns in this story that it was hard to keep up; the way Dark was treated after he did nothing but be a true hero by Anna was also irritating; a true dumb a**. Looking forward to listening to more Kindred books if or when Evangeline gets those creative juices going!

I would love to see each face as you make the connection between the story you are reading and my proposed alternate title (above).

And...is it just me or am I truly seeing a "dumbing down" of the Kindred warriors? As I read each book in the series I become increasingly frustrated by their ignorance of the obvious.

Still, I remain hooked on the series and can not keep my finger off the "Buy..." button.

Hmmm... perhaps the D&D is facing me in the selfie lens!