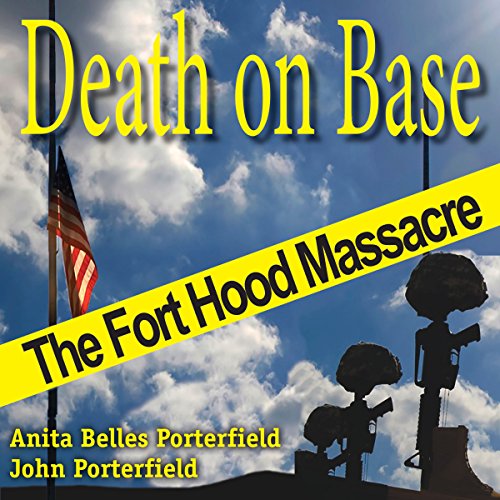 Death on Base: The Fort Hood Massacre

When Army psychiatrist Nidal Hasan walked into the Fort Hood Soldier Readiness Processing Center and opened fire on soldiers within, he perpetrated the worst mass shooting on a United States military base in our country's history. Death on Base is an in-depth look at the events surrounding the tragic mass murder that took place on November 5, 2009, and an investigation into the causes and influences that factored into the attack.

The story begins with Hasan's early life in Virginia, continues with his time at Fort Hood, Texas, covers the events of the shooting, and concludes with his trial. The authors analyze Hasan's connections to radical Muslim cleric Anwar al-Awlaki and Al Qaeda in the Arabian Peninsula (AQAP) and demonstrate how radical Islam fueled Hasan's hatred of both the American military and the soldiers he treated. The authors explore the strange paradox that the shooting at Fort Hood was classified as workplace violence rather than a terrorist act. This classification has major implications for the victims of the shooting who have been denied health benefits and compensation.

"This is a story that is expertly told and is useful as a reference into this ghastly event." (Gary M. Lavergne, author of A Sniper in the Tower)
"A real page turner, but it's also a cautionary warning that dangerous extremists continue to slip through the nation's security net." (Robert Rivard, director of the Rivard Report)
"It is a significant contribution to the literature." (James Marquart, co-author of The Rope, The Chair, and the Needle)

What listeners say about Death on Base: The Fort Hood Massacre

The writers really needed a good editor. The book is very repetitive-I mean literally, there are many full sentences and paragraphs that are repeated over and over throughout the book. Were they just padding their work? The book also seemed biased against Hassan, which was completely unnecessary, since only a terrorist is going to side with the terrorist. Why not put more effort into researching how this US Army Major got through his residency and his fellowship instead of just compiling publicly available information?

Do the authors really think that that the Army Human Resources Command tracks the individual performance of a psychiatry resident and then reaches back and exerts influence by keeping clinical supervisors from accurately evaluating the performance of a physician in residence? Believe me, HRC doesn’t even know a Soldier is alive unless: a) they aren’t; b) they are coming up for promotion; c) they are coming up for a PCS move; or d) they get arrested for shooting a bunch of people, violate some other law or regulation. The authors have obviously never served.

Then there was an entire section devoted to Hassan’s promotion where they mix up the commissioning process with the promotion process in an attempt to make the Army look negligent by promoting a fat, racist, anti-American, conscientious objector seeking, radical Islamic terrorist (who even the real radical Islamics thought was too crazy to associate with). Face it, he was promoted because his superiors were too lazy to call him out on his obvious unsuitability as a military healthcare provider and US Army officer and just separate him. Hassan did everything but present an anti-American lecture to his colleagues in order to get thrown out (wait, he did do that). Anyway, promotion and commissioning are not the same thing. Once a person is a commissioned officer and are up for promotion, they do not re-apply for a promotion as if they are commissioning. All the officer does is certify their personnel file (OERs, awards, education, etc) and update their photo. I am surprised that an editor didn’t catch that- it really discredits the author’s command of the subject (they either did a thimble-full of research on this topic or they are trying to bias the reader).

Instead of floating ridiculous theories, why not put more effort into the voracity of all of the anti-Army (anti-DoD) allegations from the survivors and public or at least give a logical rendering of the DoD’s side into some of the decisions that were made about the survivors’ statuses in terms of disability? There is a difference between a line of duty injury or fatality and non-line of duty. Why not attempt to explain that to the reader? I am not anti-survivor, I would just like to see a logical, honest and rational presentation of the facts, so I can come up with my own opinion.

Further, there is no discussion of how easy it is to obtain firearms in this country, the purchasing and exercising of political power by the NRA or any comparison between the frequency of mass shootings in the US versus countries with strict gun control laws. Why not explain to the reader why the survivor can’t sue the gun, ammo or magazine manufacturers in the US? If I was injured by a Ford airbag, I can sue Ford, and this is not true for guns. How can you have an entire book about a mass shooting without a serious discussion about gun control? If the authors are gun rights advocates and believe that this country needs more armed men, women and children wandering around in public, and not fewer, then why don’t they just be honest and say so instead of leaving the subject of gun control out of the book and leaving the reader to scratch their head...

If you want a superficial Wikipedia rendition of the Fort Hood Shooting, this is the book for you. Too bad there aren’t very many scholarly books on this topic in the audible library. For my money the best and most comprehensive study on mass shootings in Columbine.

you need to listen to this book.

this was a well written book, I didn't know that there was so much more of the story. this trouble incident could have been pervented if someone would have turned him in.