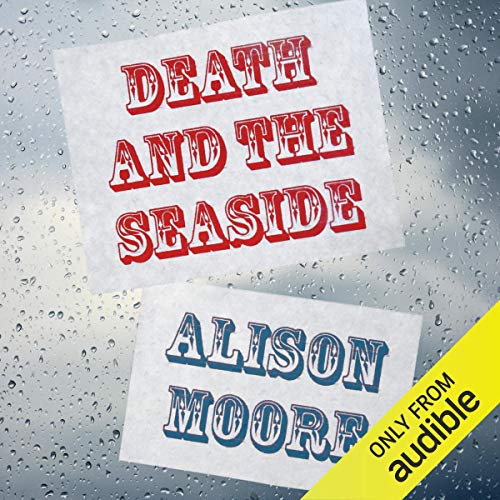 Death and the Seaside

By: Alison Moore
Narrated by: Imogen Church
Try for £0.00

With an abandoned degree behind her and a 30th birthday approaching, amateur writer Bonnie Falls moves out of her parents' home into a nearby flat. Her landlady, Sylvia Slythe, takes an interest in Bonnie, encouraging her to finish one of her stories, in which a young woman moves to the seaside, where she comes under strange influences.

As summer approaches, Sylvia suggests to Bonnie that, as neither of them has anyone else to go on holiday with, they should go away together - to the seaside, perhaps.

The new novel from the author of the Man Booker-short-listed The Lighthouse is a tense and moreish confection of semiotics, suggestibility and creative writing with real psychological depth and, in Bonnie Falls and Sylvia Slythe, two unforgettable characters.

Alison Moore's first novel, The Lighthouse, was short-listed for the Man Booker Prize and the National Book Award (New Writer of the Year) and won the McKitterick Prize. Both The Lighthouse and her second novel, He Wants, were Observer books of the year. Her shorter fiction has been included in Best British Short Stories and Best British Horror anthologies, broadcast on BBC Radio 4 Extra and collected in The Pre-War House and Other Stories.

Born in Manchester in 1971, she lives near Nottingham with her husband, Dan, and son, Arthur.

What listeners say about Death and the Seaside

Alison Moore seemed more interested in proving a thesis rather than in presenting believable characters. She includes long extracts from psychological studies and then manipulates her characters to illustrate the point made in the extracts.

Has Death and the Seaside put you off other books in this genre?

Cannot think of a comparable book but I do not think I will read another of Moore's books.

None. There are no likeable characters in this book but Church's portrayal of Bonnie's parents turned them into total caricatures.

Do you think Death and the Seaside needs a follow-up book? Why or why not?

I cannot imagine that anyone who struggles through this book would want to hear about any of the characters ever again!

wish I hadn't of bothered

The Lighthouse was such a great book that I had high expectations for this. If you take the storyline away, the writing is lovely! But overall it just doesn't work… it's a bit like Ian McEwan crossed with an A-level students essays. Sorry Alison…

If you are looking for something light, attention grabbing, and slightly unusual don't pass this by. It has high entertainment value and is very difficult to put down.

The characters are beautifully written. I couldn't help but feel sorry for Bonnie. She's painfully suggestible. And her parents (her father especially) are absolutely awful people! Moore did a reasonably good job of keeping us in the dark about Sylvia Slythe's history, only giving us information on a drip feed.

Imogen Church really sells this one. Her narration is spectacular. The accent she gives each character in the novel is gorgeous - she's absolutely nailed them, giving them a comedic value they deserve. I suspect it's a far more compelling book in audio than it would be in print.

Some reviews I've seen suggest the novel has psychological and/or literary depth. Don't expect much of either here. The literary references are from Bonnie's unwritten dissertation. In a more literary read these would form the bones of something greater. Here they are just a list. And the psychological references form Sylvia's motivation, but they aren't taken to any depth.

It's a lovely distraction, though not a memorable book. I expected something a little more literary but in all it's a good read.

quite interesting. not your usual plot refreshing

as always there are no spoilers in my reviews
my main interest in this book was my favorite narrator Imogen Church ( an Audible Angel's voice) I really enjoyed this book although way too short. finished in basically one sitting.
this book was in my wish list for over a year ,I couldn't justify using credit for a 5 hour book. even at it's sale price went to $12.52 I still couldn't do it. finally got it 50% off at $8.90 not half?? my only critique was that I wanted more
too short for use of full credit. but definitely grab while on sale. enjoy
thanks again Imogen church for a stellar performance.

I have tried to get through this book twice. Even though it's not all that long, have given up halfway through for good. Pointless and depressing.