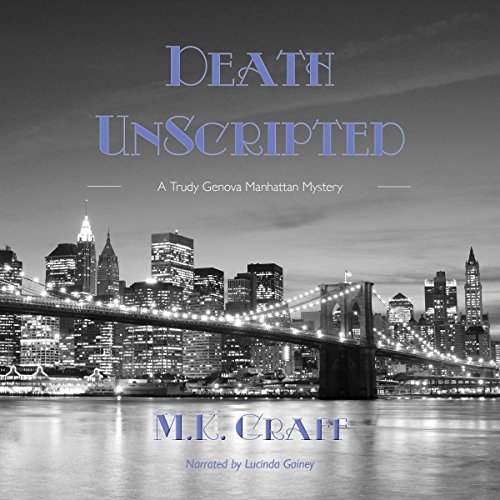 Trudy Genova has the best job any nurse could want, working on set as a medical consultant for a movie studio. No more uniforms, bedpans, or emergencies, until the actor whose overtures she's refused dies suddenly while taping a hospital scene - but not before pointing his finger accusingly at Trudy. When detectives view Trudy as a suspect, she sets out on an investigation to clear her name. Then a second death occurs, and Trudy realizes she's put herself in jeopardy.

A new mystery from the award-winning author of The Nora Tierney English Mysteries, based on the author's real-life nursing position as a medical consultant for a NY movie studio. This is the book her mentor and friend, P D James, insisted she write, and it is dedicated to James.

"Graff gets behind the scenes of soaps just right, as well she should - she was there!" (Marilyn Chris, Obie and Drama Desk Award-winning actress who played Wanda Wolek on One Life to Live)
"Soap opera drama is as intents on set as it is on the screen. Sometimes Trudy Genova, consulting nurse, feels like the only sane person in the room. Join her as she copes with huge egos, daily melodrama, an attractive detective, and life in New York - plus murder. The city and the studio provide intriguing backgrounds for this entertaining mystery." (Triss Stein, author of the Erica Donato Mysteries)
"Your blood pressure will soar during Graff's new Manhattan Mystery series, as nurse Trudy Genova take the pulse of a killer during a soap opera filming in Death Unscripted. You won't even think of changing the channel during this smart, suspenseful mystery." (Edith Maxwell, Agatha-nominated best-selling author of the Local Foods Mysteries)

What listeners say about Death Unscripted

WHAT A PERFECT TITLE "DEATH UNSCRIPTED"!

A wonderful book that could make a great movie if done right. I was entertained from start to finish by the constant twist and turns of not one murder but two! Kept me guessing until the end and even then I would never have guessed. This book has it all! A murder mystery with great characters and just the right amount of romance. I definitely recommend this book.

Death Unscripted will be one of those books I listen to over and over!
Set on the set of a soap opera, murder and mischief fit in unscripted!
MK Graff didn't miss any of the details, describing everything so you can picture the story as it unfolds. Adding humor and mayhem keeps you engaged. This story will keep you guessing until the end as you try to figure out whodunit!
Lucinda Gainey has a soothing voice to listen to and although her voice depictions weren't very distinctive, she helped to bring the story to life.

I loved this cozy! Trudy has a lot of spunk and depth, and I found her wit to be enjoyable. She's a great lead & I love the banter between her and Ned. It's also great to see a true best friendship between Trudy and Meg. The story takes place on the set of a soap opera, which is fun to see "behind the scenes" so to speak, and get that peek into the diva antics of the stars. Murder strikes twice on set & It was a fun ride to the conclusion! I was gifted this book in exchange for an honest review

No.It's a murder mystery with possible romance, with possible murder in the past. But not one of the aspects had punch. No tension, fear, excitement. I was interested in who did it, but the path to the end was frustrating and not all aspects was concluded.

What was most disappointing about M.K. Graff’s story?

It was not bad, just not good enough to recommend to someone else. The main character was unrealistic. She's a nurse, in show business, who want to be a detective....sound like a split personality.

Yes. The Irish ascent was weak, rather not do it.

Was Death Unscripted worth the listening time?

I did not hate it, but it was not worth the time.

"This audio book was provided by the author, narrator, or publisher at no cost in exchange for an unbiased review."

I received this audible edition for my honest review.. I really liked the narration.. believable characters.fast paced and easy to understand.. highly recommended..

Life is a soap opera!

Would you listen to Death Unscripted again? Why?

Yes, all the twists and turns kept you guessing

Trudy in the closet being drugged

Murder At The Opera

The best part of the book was learning what really happens on the set of a soap opera. Thinking about the small details that make a soap scene realistic gave me a new appreciation of the crews who work behind the curtain.

What aspect of Lucinda Gainey’s performance would you have changed?

The accents that she used for the two detectives did not sound realistic. The voices of the other characters were great.

Murder On The Set

I was provided this audiobook at no charge by the author, publisher and/or narrator in exchange for an unbiased review via Audiobook Boom.