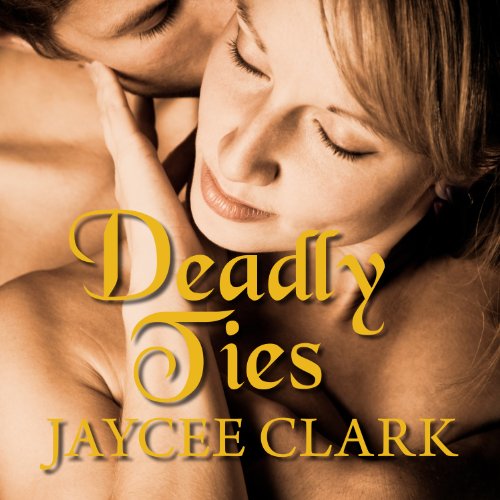 Taylor Reese is done with men, except for her son, Ryan. Dr. Gavin Kinncaid realizes Ms. Reese is the only woman he's ever wanted to strangle, but fate and passion soon twist their feelings into something other than antagonism, first into passion and then into love. But someone plots to rip this new happy family apart, spilling pain and death in their wake.

"Four and 1/2 Stars! . . . Clarks showcases how close-knit and supportive this fantastic family is." ( RT Bookclub Reviews)

It's an absorbing, non-stop listen and I LOVED it.

This book has the whole package for any romance lover - it was very well-written, well narrated, had a thrilling suspenseful plot, loveable/likeable/interesting/evil characters, but above all, it was an intense heartwarming romance.

Gavin's a Doctor who's also a charming, wealthy, handsome, successful, ladies man and when he meets Taylor, a gentle, caring, protective Social Worker, professionally they don't get off to a good start - even though sparks fly. However fate, thankfully, gives them a second chance when Gavin comes to Taylor's, and her adopted son Ryan's, rescue later that night and somehow Gavin feels the needs to protect them. Ryan's been to Hell and back in his short life - being brought up by a junkie of a Mother and he's got the mental and physical scars to prove it but he's slowly getting over things with the loving care of Taylor and writing in his personal Journal but he also has visions.

As this very intense drama slowly unfolds, we witness Gavin and Taylor learn to trust one-another, build on their friendship, observe their touching, tender romance blossom and watch as a family unit evolves. We also hear excerpts as Ryan writes down his feelings in his insightful but emotional Journal. Unfortunately, while life is taking a happier turn for all, we also know straight away who the villains are, and they are patiently plotting their explosive, painful and devastating revenge.

This enjoyable story is a roller-coaster ride with twists and turns, humor, danger, suspense, surprises, great family dynamics, tragedy, kidnapping, with a wonderful sexy love story and, as the final nightmare chapters unfold, there are heartbreaking consequences for all concerned. Luckily the Kinncaid family members are there ready to support and help..... in any way then can.

Worth a credit? It's one of those all consuming, traumatic yet touching love stories where the characters and their lives stay with you long after the story ends but creditworthy? it's an ABSOLUTE MUST HAVE - so YES and I'm desperately waiting for the next one in this series.

I gave this series a 5 star rating, I love family book's and I was never dissapointed with any of the book's. I suggest if you like families who stick together to get all 4 book's. It's well worth the price.

I am really loving the audiobooks by this author and narrator. This one was particularly good for the first part of the book. I liked the strife between the hero and heroine. I enjoyed the dynamic of their jobs (even though their initial meeting was extremely tragic)...the social worker and the physician. Their chemistry was incredible through the first parts of the story. I also really enjoyed the whole backstory for Taylor and her ex-husband. That just about broke my heart when that all came out...what a shocker.

Although I really loved the two of them together, I'll admit that their relationship flip-flopped WAY too quickly for my liking. It seemed like they were at each other's throat one minute and then pledging forever in the next. What? That was my main issue with this book, although the ending did help to make up for it because the ending of the book was really good, too.

And I need to note the narrator here. This book features a whole host of characters...about a dozen adults and two kids which speak regularly. Never did I have an confusion about who was talking at any point in time. Johanna Parker has a HUGE range of voices and inflections that made her simply a joy as a narrator.

The suspense line features a bad guy that's never a secret or a surprise in this book, but I did find myself incredibly intrigued by older Kinncaid brother, Ian. I need to know what exactly he does that has left him estranged from the family for so long while still remaining completely loyal.

Because the writing is supberb. I'm a published author in this genre and I am fairly jaded and unimpressed with most romances. They are fun reads, but nothing moved me recently. This book did. It hit me right in the heart in the best way. The story and characters are flawlessly done. The entire series is fantastic!

What other book might you compare Deadly Ties to and why?

There's really nothing to compare it to because it's better than some of the bigger names out there. I should really say it's a question of who can I say she's better than? Better than Rose, Robards, Howard. Clark is truly in a league all her own!

I think the entire book was really my favorite. I listened to it for two straight days because I had to know how it ended!

SPOILER: Near the very end, during a hopsital scene when the hero Gavin breaks down completely when Taylor the heroine is in the hospital on life support. He learns she was pregnant and loses the baby during the two times she flatlines. It kills him because he knows she's lived 8 years without thinking she could get pregnant and all of this in the midgst of her adopted child Ryan being kidnapped by his insane birth mother. Sounds overly dramatic i know. But trust me, when you listen to it? It breaks you too, in a good way. I actually choked up and tears were dripping down my face because I was in just as much pain as the characters in that moment. That is how good this author is. I was so moved, that this is my first audible review. I felt I owed it to Clark to tell other people how good this series is. The first book was just as great and I'm currently in the middle of the third and just as spellbound!

If you like romance, if you like suspense, if you like a book that will feel real even with what sounds like crazy drama, this book is it. I haven't read anything this amazing in months!

YES, because I think JC writes well and with each book the story gets better.

Ryan. What a great kid. What a gift JC has in portraying this kid's personality, in writing his journal, in his bravery and letting us know the effects the trauma perpetrated on him had through his thoughts and his journal. Great job JC.

Then, of course Taylor and the good doctor, Gavin; they, after all, were hero and heroine.

I thought she did a really good job. I think her male voices could be a little more "male", but overall she did good.

Yes, when Ryan & Tory were together with the bad guys. (Tried not to spoil)

The book was very predictable, but done well. I like this author and would like to see more of this series as well as other things she has written.

I am really enjoying this series. Each book seems to be better than the last. There are so many facets to the Kinnkaid saga. Going on to the next right away.