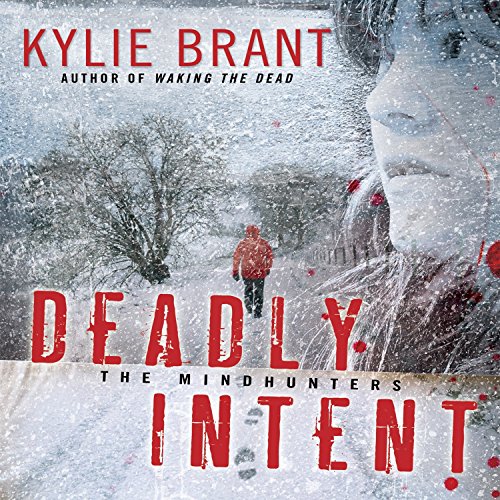 By: Kylie Brant
Narrated by: Bronson Pinchot
Try for £0.00

Forensic linguist Macy Reid is an expert on kidnapping, having been abducted when she was a child. So, she is the perfect investigator to be called in when a Denver tycoon's 11-year-old daughter is abducted - for the second time. But Macy's biggest stumbling block may be a member of her own team: Kellan Burke, the wise-cracking, rule-breaking investigator who relishes getting under Macy's skin - and who just may be the man to help her confront the demons from her past.

What listeners say about Deadly Intent

Great book but leaving the ending so open spoiled it for me which is why I've giving it 4 out of 5 for the story.

A great story by an author I haven’t read before.

I really enjoyed the story line and the whole book in general. What I didn’t like was what I think is the production of the audio. Within one chapter there would be a change over between characters and events in the story lines. This is different from other chapter books where a change in characters was noted by a change in chapters. In this book you would be listening to 2 characters having a conversation then without pause it would be 2or 3 other characters in a totally different scene talking. The break between was not noticeable and I would be listening along and suddenly realise somewhere it changed. I was frequently scrolling back a minute or two to find where it changed so that I could visualise in my head who and where the characters were. It’s very disconcerting and I believer there should be an more obvious pause by the narrators when changing characters.

A book with so much “relationship” padding as to make it a slow tedious slog to get through.

Hated the cliff hanger, would not have bought the book had I known it was such. Forces the reader to buy the continuing saga. Love Bronson Pinchot as a reader. The only reason I finished it.

Narrator was great at the different voices

Macy Reid and Kellan Burke are both employed by Raker Forensics, a private consultancy company. The owner, Adam Raker, was contacted by a Steven Mulder to investigate the kidnapping of his daughter, Ellie. Mr. Mulder does not trust the FBI because they had not rescued Ellie the first time she’d been kidnapped — but Adam had, during the course of a different investigation. However, Adam insists that at the very least state law enforcement should be involved. Now, the Raker team is working with people from the Colorado Bureau of Investigation and the Sheriff’s Department. Macy is a forensic linguist as well as an investigator, like Kellan. As well as figuring out who kidnapped the child, there is an ongoing slow burn interest between Kellan and Macy.
You see that three star rating I gave this book? The plot is great, with enough suspense to keep you reading. The characters are well-developed, from the protagonists, through the secondaries, all the way to the villain. The dialogue is clear and moves the plot along, and the grammar and usage are excellent. So. What did I have a problem with? I’m pretty sure no one, regardless of wealth, could keep the FBI from investigating a child abduction. Sure, state law enforcement could handle most issues within their own state, but in the case of an Amber Alert, the FBI gets involved. Aside from that, I have a problem classifying this as romantic suspense. Perhaps I should just call it suspense with sex, because I just could not feel the chemistry between Kell and Macy.
My biggest issue was the lack of resolution. Sure, they took care of the kidnapping, but who planned it? And, on a personal level - for Macy - will she be brave enough to follow up on that huge hint Castillo dropped on her regarding her own abduction? Well I can tell you this much — I won’t be finding out. I hate cliffhangers. They are just a manipulative way for an author to get you to buy the next book. I probably would have gone back and read the first 3 books in the series, probably would have stayed with the series through all 9 books. But nope. Nuh-uh. Not gonna do it. This author just went on my $#*t list.

The audio production and narration are excellent. Half of the reason I got this (the other half being the sale price) was the narrator. I had always seen good ratings for Bronson Pinchot and I wanted to hear for myself. I am delighted with his performance.

Complex, likeable characters, very well written, and overall a great series! I'm so happy this series was offered in the new Audible extras!

This is a good crime thriller book. The detective team comes at the request of a victim's family. Their child has been kidnapped for the second time. Seeing how the team works together and what each of their personalities and background brings to the case is almost as fun as listening to them driving each other and the Feds crazy. The kidnapped child is realistically but not grusomely portrayed. The author accurately portrayed trauma in both the child and the detectives. This was an an exciting story.
The only flaw was the narrator. He gave a good performance, except that he pronounced the word "dour" as "doer." Also, he sometimes did not pause enough between chapters and it took a second to figure out that you were in the next chapter. The errors were not enough to ruin the book. And overall, he gave a good performance. The story is well worth the listen.

Loves this one. Narrator annoying with women and...

This book is full with many little side-stories going on. That makes it a tiny bit harder to follow until you get the names straight (I actually ended up having to write them down!), but the work is worth it.

Narrator bugs me so much with making people—particularly all women, and background or secondary characters, sound apologetic and wishy-washy. Ugh

Awesome story so so performance

Loved the book and story line. But the permanence left a lot to be desired. The narrator never took a breath or pause when transitioning from character to character or from chapter to chapter. And since he wasn’t consistent with the voices for each character it made it really hard to catch transitions. Again loved the book. Love Kylie Brant as an author. Might have loved the book more in hard copy (and that’s hard because I almost only do audio books now).

I loved the story line and even the ending. I was caught off guard pretty often by the narrator going straight to a different scene and character without any notice. I even had to back up several times for the flow of the story to catch up once I realized it was a totally different part/person. Still, I'm enjoying this series alot.