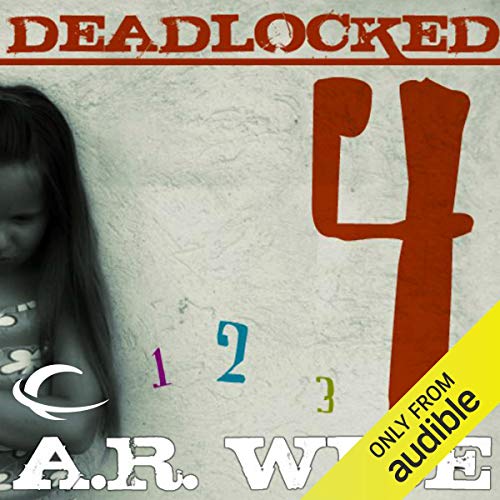 It all ends here. The characters of the Deadlocked series have been through nearly unbearable challenges, but they're about to face the hardest yet. Kim has been taken by the cruelest, most vile person in the series, and it's up to Billy and Levon to save her. All the while, Laura fights for her life in the grip of the military as they perform tests on her daughter, Annie, that are risking the little girl's life. The conspiracy behind the rise of the zombie plague will be revealed as Reagan uncovers the horrible secret that led to the murder of six and a half billion people. The world hangs in the balance as one family fights to survive.

What listeners say about Deadlocked 4

Got a lot of answers in this book, but wait....There is more to the story. So on to the next book to find out more.

As the blurb points out, we will finally figure out whats going on and why everyone call themselves the "good guys". Great finish to this story line, as the next book takes off decades later which this book will set up, with the introduction of a new mysterious character.

The narrator, on the other hand, was lousy. He didn't even try to do different voices. He would be very monotone except he has an annoying habit where at the end of each sentence the first part of the last word goes up a notch and trails out. You can hear it in the blurb, like "eagle" in "desert eagle". I'd give him one star but I have in fact heard worse, like the narration he has done in other books which out of curiosity I had to try the samples of. The story is still listenable though.

I would have picked another narrator. I have read other books that he read and this one didn't fit. He sounded the say with each character. If you miss the part where he says" said Billie" then I was lost. He tried to sound country for Billie sometimes but bad attempt. This was a little Charlie Brown too.

I got a little more detail about the infection. Also met a lot of interesting new characters.

I think the same narrator should have read the entire series like zombie fallout- Sean runnette. I like Christian rummel who read part 3.

Could you see Deadlocked 4 being made into a movie or a TV series? Who should the stars be?

I need more time to think about this one!

Action packed and intense. Fast paced! Capable of making your palms sweaty! Good characters. Great job by the author. Highly recommend. Not for the squeamish!!

Where does Deadlocked 4 rank among all the audiobooks you’ve listened to so far?

The story was great. Narrator was terrible.

I enjoyed the story.

I am not sure. He just sounded like he would have preferred to be somewhere else.

No, almost made me fall asleep.