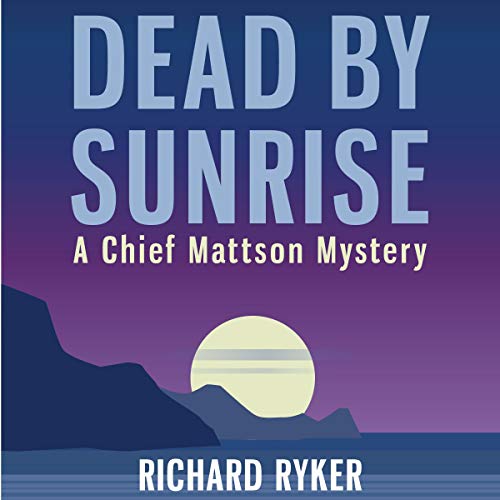 A young woman is savagely murdered on a popular beach near Forks, WA.

Former homicide detective Brandon Mattson takes command of his hometown police force just one year after his brother was killed in the line of duty. Still haunted by his brother’s unsolved murder, he struggles to rein in the fledgling department while learning the ropes as a newly divorced single parent.

Brandon’s respite from homicide is short-lived when a missing woman’s body washes ashore on the nearby Quileute Reservation. Savage fang marks and a series of ominous vampire-related graffiti point to a member of a secret blood-sucking cult. But Brandon's not so sure wannabe vampires are to blame, and it soon becomes evident that more than one person had reason to murder the young woman.

Balancing the investigation, small-town politics, and parenting his 15-year-old daughter, Brandon is running out of time to solve the case before the bloodthirsty killer claims another victim.

Fans of suspenseful mysteries with a twist will find a new favorite in homicide detective turned chief of police Brandon Mattson.

"Dead by Sunrise tops my charts for suspense, easy immersion, and great characters. It was a delight to read." (David Brown, Darling Axe senior editor)

Perfect for fans of:

Having enjoyed other Richard Ryker books I was keen to listen to this one. The main characters were good and the story kept you guessing.

Locals discover the body of a young woman on the beach of a small town. After investigating, Chief of Police Brandon Mattson suspects foul play. As he digs into the mystery, clues point to strange vampire-related groups in the area. In Dead by Sunrise, Chief Mattson must balance the murder investigation, his personal life and a Mayor determined to make his life difficult--all before the killer strikes again.

Dead by Sunrise is well-written and moved quickly. I especially enjoyed the more humorous secondary charade like Mattson's Secretary and Vasile, the vampire cult leader.

If you're a sucker for mysteries/detective stories, I highly recommend you listen to/read Dead by Sunrise.

I'm excited for the next Chief Mattson mystery!

Tom Taverna's performance was great. He really brought the characters to life.

This is a murder mystery set in a small town. The MC Brandon returns to the small town and becomes Chief of Police after doing a stint as a homicide detective. A murdered woman is found on the beach. Besides the murder, he is dealing with a divorce, a teenage daughter, his brother's murder, his angry/unsympathetic father, a former HS flame, a mayor who wants the case solved yesterday, conflict on the force, and gossipy town folk. I liked the MC Brandon - returning to his hometown and trying to figure out how to fit in again plus trying to establish a relationship with his daughter. The story definitely had the small town feel to it. The mystery was interesting - plenty of suspects who were interested in the demise of the victim - and the story moved along well. If you like mysteries with a bit of drama, you'll enjoy this one.

The narrator, Tom Taverna, has the perfect voice for this small town mystery. He was easy to listen to and did a nice job.

Had me guessing until the end. I like mysteries that keep you guessing. I can’t wait to read another book about the chief of Folks.

This was an ok book but I didn't feel it was anything special. Being that it takes place in the same area as the well-known "Twilight" series and that the murderer uses fangs to kill was interesting. It felt as though this was part of the book to make it appear more interesting than it otherwise would have been. I was voluntarily provided this review copy audiobook at no charge by the author, publisher and/or narrator.

Narration ruined it for me. Story too slow.

I couldn’t finish it and will request my credit returned. In addition to a slow and boring storyline, narration ruined it. Narrators should read the book. Stop changing voice levels trying to imitate women and other characters. It is quite distracting. Just READ the book. Tell the story. We get it. However, I could not finish this one.
👎🏻👎🏻👎🏻

This book had me a little concerned that it was going to be like twilight but it was so much better, The brother of the local home town cop takes over as police chief and his first case is anything but expected. There are crazy towns people, vampires, and family squabbles. Brandon does a great job investigating the murders and there are unexpected twist and turn along the way. The narrator did a great job making each character their own and the story was unique enough to keep me coming back to but not coming across and cheap. I received this book for free for an honest review.