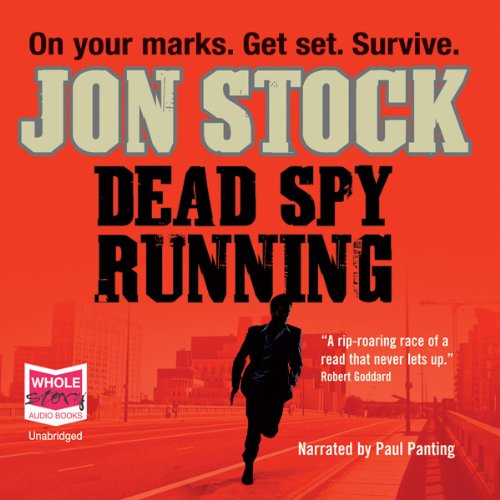 Daniel Marchant, a suspended MI6 officer, is running the London Marathon. He is also running out of time. A competitor is strapped with explosives: if he drops his pace, everyone around him will be killed, including the US ambassador to London. Marchant tries to thwart the attack, but is he secretly working for the terrorists?

There are those in America who already suspect Marchant of treachery. Just like they suspected his late father, the former head of MI6. On the run from the CIA, Marchant is determined to prove his father's innocence in a personal journey that takes him from Wiltshire, via Poland, to India. It was here that the former MI6 chief once met with one of the world's most wanted terrorists, and where the new President of America is shortly to visit.

But was that meeting proof of a mole within MI6 or the best penetration of Al Qaeda the West has ever had? And was Marchant's father the keeper of another, darker secret?

I've never really read/listened to spy novels before, but I downloaded this as I'd read that Warner Bros had snapped up the rights for the film, even before the release of the hardback!

The audiobook draws you in right from the beginning with the set of the London Marathon and with the many twists and turns keeps you listening throughout. For a spy novel that's not overly complicated story, Dead Spy Running is a good choice.

I didn't know what to expect from this novel, but I found it really compelling. The plot is fast moving and really hangs together with lots of twists and turns.

A gripping and fast paced story that delivers.

An entertaining story that moves at a cracking pace
and if you can ignore some of the occasional
silliness in the plot-points (CIA willing to torture
fellow agents at the drop of a hat etc.); it
delivers a frantic twisty-turny roller-coaster that
should keep you gripped until the last minute.

Unlike a previous reviewer, I really liked Paul
Panting's delivery, he gets the breakneck pace just
right and any actor who can do a credible Indian
accent, without sounding like he's doing a Peter
Sellers impression, deserves credit.

If you like spy novels, this is a good one.

Never written a review before but felt I had to for this book. Listened to it on my daily commute. Not often when I have parked the car in the garage at home that I sit there and listen for a few minutes more. Really enjoyed this book and would recommend it highly.

Thoroughly enjoyed this audio book, didn't want it to end. Would recommend to anyone who likes crime thrillers.

This follows on the 1960s spy thrillers, with its intrigue, betrayal, clever hero, mechanically professional villains.

The narrator is annoying - I recommend speeding it up to ease the pain. He speaks every sentence as though it is critical, which is at odds with the text.

Did I mention that this book was awesome? From start to finish, loved it, can't wait to get to the next book in the #Legoland trilogy!

What a great plot - you have to admire the ingenuity that went into this spy thriller. I suspect that the pain of running is not unknown to the author. The flaw of the story is that a trusted agent is so easily suspected and then discredited apparently on the whim of one senior officer that takes a bit of swallowing. MI5 has had a couple of powerful women directors but both have been models of integrity.
Never mind a good listen

This book is great and I really enjoyed it. It's quite action-packed for a British Spy Novel but that's no bad thing.

Dare I say Jon Stock is as good as Len Deighton? I shall be looking out for more from this author.

Good story - quite "Bourne" esque and generally fast paced. I got a bit bogged down / disinterested in the India section about 2/3 of the way through, but made it to the end and enjoyed it.
Recommend to anyone who likes Bond / Bourne stories.

First in a series of three so far. I came to this novel after reading the third Dirty Little Secret, which was much better. Without criticising the narrator too much so is Colin Mace's reading in the later novel. The writing gets better in the third. Interested now to listen to the second.