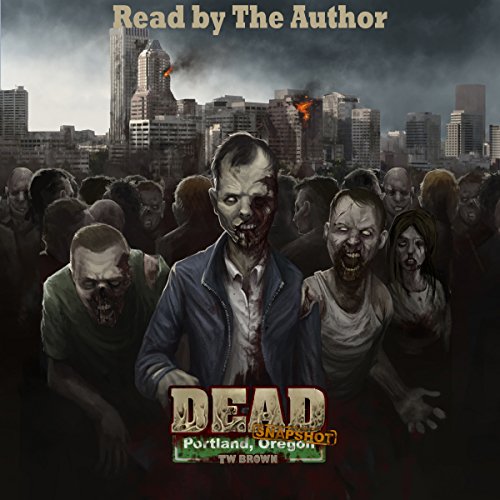 The world of the Dead has come to your doorstep.

TW Brown's best-selling series is now unfolding around the world in cities and one-stoplight towns alike. The first stop is his very own Portland, Oregon.

Meet Ken Simpson, a retired police officer; Rose Tinnes, a newly divorced woman trying to get her life back in order; and Jason Edwards, a man recently paroled and looking forward to his freedom. These three people form the nucleus of an unlikely group who will struggle to survive as their city falls to the undead.

As the city of Portland, Oregon, spirals into hellish chaos, it is not just the walking dead that prove to be a problem. In a world suddenly stripped of any order, it might be the living that pose the greatest threat.

was a good book. but I didn't like how it just end

the book was good but just seemed to end. like Jason's death was just to sudden. all in all it was OK.

Would you consider the audio edition of Dead: Snapshot: Portland, Oregon to be better than the print version?

Yes. I am a big fan of when the author of the story narrates their own story. It's so much fun to hear how the author gives life to the character

Just the suddenness on how Mr. Brown would kill of characters, especially those who I thought would be the main characters and at least will be in the next story. But nope, gone.

I have family that live in Beaverton, Oregon and the description of it was spot on from what I remembered. Made me smile imagining that place being over run with zombies.

I am a dog person and it made me tear up hearing the dedication of the dog to her master. I am not going to spoil it but be ready to get some tissue.

The story and conflict that happens in the book seems realistic. Just feels like this could be happening and the way the character react to it can be relatable. You can almost imagine this is how people would react if a zombie breakout did happen. This audiobook was given by the author, narrator, or publisher at no cost in exchange for an unbiased review via Audiobook Boom.

Although this audiobook was given by the author at no cost in exchange for an unbiased review, I have listened to the original Dead books from TW Brown. So I kinda knew what to expect. This book was fine, but wasn't as engrossing as the first books in the Dead series. I can see how some readers would be lost, when reference to details in the other books are mentioned in this book, with no background given. And when beloved characters were killed off, I remember why I stopped listening to the original Dead series.
The author did a fine job with narrating. I mean, he's no professional, but did well.

great for a first time.

I will be brief. but effective with this. the overall story is superb. Nothing like the imagination of TW brown to keep you company on long days on the road. I have nothing bad to say about the charecters. stories or anything of that sort.

on to the bad but fixable part. I was listening intently for patterns of errors or flaws. your voice. is perfect. but the sound quality is .. lacking. I will explain

in some parts it seemed like you were far away from the microphone. or turning your head. maybe even getting a cup of coffee. I am not sure. that is my only complaint

on to the great part. your voice is mesmerizing
utterly drew me in. along with your writing and it blew my mind how I wanted to keep listening no matter what
so if this is your new venture. keep it up. I applaud your new venue. and I am first in line for snapshot 2. so my old friend. there you have it. the good the bad and the ugly. mostly good though. thank you again.

Loved the fact that the Author was the Narrator

I learned this was the author's first attempt at narrating his own novel. Though there was one spot where he repeated himself, and a couple more that were off, I am still giving him 5 stars for his performance. Mainly because he did what I expect in an audio book. The characters had their own voice and each was given personality. The reading was at minimum average and at best great. But either way, it just sounds better coming from the author himself. As an author myself, I KNOW I will never be able to do it, at least, not nearly as well as Brown did.

The story itself was great. I've been a fan of the Dead series since before I started writing myself. Even if you never read the main series, this book is fine as a stand alone. There is a beginning, strong middle, and a finality to it that was comfortable. Being in the apocalyptic genre myself, I am always critical of the way the stories play out. Most do not have an ending at all. This ending, while not "climatic", was appropriate for the story.

The characters were great. My favorite was the Ken, the retired cop. He wasn't a good or bad guy. Knowing many police officers, I know it is a occupation that leaves you jaded about most situations. Ken was portrayed great. He was the Dirty Harry character that wasn't "unstoppable", but instead relate-able.

The realism of Brown's writing gets me every time. Everything is possible (at least, as far as a zombie apocalypse is concerned), Too many stories in this genre have "Rambo" as the lead. Don't get me wrong, Ken and Jason are both pretty tough, but it's realistic. They have feelings (both good and bad).

I also have to mention Brown's use of the dogs. Being a dog lover myself, and having one of my main characters an actual dog, I was very happy with how Brown used them in this story. I would think getting into their heads would be cheesy, but Brown got 5+ stars from me when he showed things from their perspective.

Great work and I am looking forward to more of the snapshot series!

Life amongst the undead

I am a great fan of TW Brown's DEAD series. I've read them all up until this one. I work overnights, so listening to a book is very appealing. Something to keep me company while I do my duties.

Here we get a peak into the lives of a small group of people who start to band together at the start of the outbreak and their decisions on how to live through the end of civilization. Not everyone gets along. Not every decision is met with enthusiasm, but sometimes you have to make due to survive. Some scenes are grisly, Brown doesn't molly coddle what the zombies or the living will do to a human being.

Having the author as the narrator allows one to hear the story as the author imagined as he wrote is wonderful. Brown has a pleasant narrative voice as he takes on all the characters of the story.

What did you love best about Dead: Snapshot: Portland, Oregon?

What other book might you compare Dead: Snapshot: Portland, Oregon to and why?

At face value you could compare this book to other Zompoc fiction however TW Brown writes in a very descriptive way creating characters you either love or hate where you are rooting for them or wanting them to meet their end!

Have you listened to any of TW Brown’s other performances before? How does this one compare?

This book (and the series) made me wonder what I would do if the world fell apart.. would I be strong enough to live up to the ideals I have now an dhow would the lines between good and bad blur as situations got more desperate.

I need to add that I was provided a copy by the publisher in exchange for an honest review.

Stellar, gripping writing in the usual DEAD fashion! And such a treat to hear it in the author's own voice!! Thanks so much for this awesome addition to your world, TW Brown! I look forward to what are, hopefully, many more adventures to come!

THIS IS ONE OF MY FAVORITE BOOKS IN THE "DEAD SERIES" and THE FACT THAT THE AUTHOR NARRATED IT, MADE ME REALLY REALLY LOVE IT EVEN MORE!!

What did you love best about Dead: Snapshot: Portland, Oregon?

I loved the relationship between the cop and convict. They made the story interesting

When Ken died because he knew he was a drain on the group.

What does TW Brown bring to the story that you wouldn’t experience if you just read the book?

I experienced the changing of voices to differentiante between the characters.

I did listen to this in one sitting.

I absolutely love TW Brown and his narration. The Dead Series is one of my all time favorite zombie stories. I can't say enough about this book and author. Thank you so much.


This audiobook was provided by the author, narrator, or publisher at no cost in exchange for an unbiased review courtesy of AudiobookBlast dot com.

Zombies coming to your city soon!

I wouldn't change anything

A key character that dies. didn't expect that. Felt the loss.