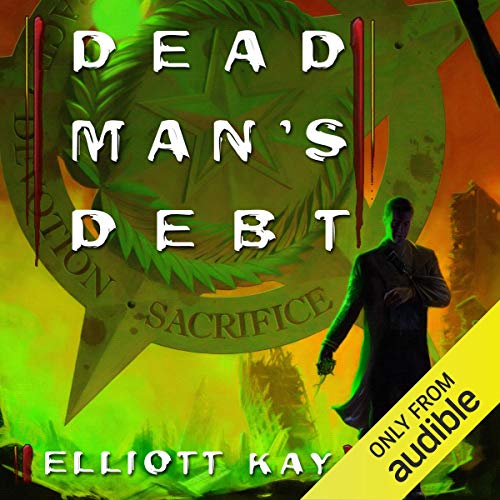 "We require a different battlefield."

Nobody expected the war to last three hours, let alone three years. The star system of Archangel holds the line against invading corporate fleets, but a quarter of its territory is already lost. The navy can't hang on much longer. Faced with this grim truth, Archangel's leaders shift their strategy to diplomacy and espionage. For both arenas, they call upon a reluctant weapon: a frontline grunt named Tanner Malone.

These days Tanner doesn't aspire to win the war. He merely wants to survive it. Now he'll be thrust into the center of events once again, pulled back and forth from covert missions to the media spotlight. Yet with every battle, he gets closer to the old enemy hidden in the shadows and the ugly truth about the war that could unravel everything Archangel might hope to win.

Ive really enjoyed the whole series with Tanner Malone; the characters are well structure, the plot lines interesting, and the story has kept me wanting to hear it through to the end. Bring on the next installment please.

Good from beginning to end

Great story over three books and the third book raps it up with a bow. About 30 bucks for all three and over 60 hours. Worth it.

Another fantastic adventure with Tanner Malone

I had been waiting for this, it was absolutely amazing, while at the same time it made you think about what had been lost in the course of the story. Never just a war novel, Tanner brings the fight home with his personality and his refusal, regardless of the circumstance, to be ok with everything he must do.

Mr. Pabon narrated excellently, his characters are varied and well voiced. I couldn't have listened to it with another narrator, great job!

Way too PC. It’s like the author decided to go out of his way to normalize the fringe views of the minority in society. I’m consider myself moderate but Jesus this went from bashing monogamy to making the MC appear the most laid back spineless prick in relationships. Don’t marginalize the majority to pander to the minority.

I have enjoyed the over all concept of this book series. I had no trouble getting into the story. I also am currently re listening to the book.
If you liked the series, Undying Mercenaries, Old Man's War, Expeditionary Force, give it a try.

This book is better than the first 2 books in the series each of which I gave 4 Stars. I consider books I give 4 stars every bit as well-written as 5 star novels. They also are extremely fun and enjoyable to read. From my perspective, the only difference I find between a novel with a 4 star rating from that I give 5-stars is the the degree of pleasure I take in the novel.

in this, his third novel in the series, the author has managed to create a wonderful group of characters centered around a well-developed & characterized hero. The hero is one I not only found likeable, but also a character with whom I could relate and empathize.

I suppose some may criticise the likelihood one person always turning up at such crucial places and times during the course of an interplanetary conflict, & in each instance, not only surviving the events, but handling himself so adeptly. However, that's a good part of what I found enjoyable in this novel.

In fact the manner in which events occurred & the main character's means of handling himself is not unlike the Jack Ryan character found in Tom Clancy's series of novels. With respect to both Tom Clancy & the author of the the present book, I find that attribute enjoyable & accept it as legitimate creative license.

The development of a future society in which all the events take place is also well developed, intelligent & seemingly entirely plausible in some distant future.

As for myself, a 64 yr old lawyer, I find myself now completely drawn into this wonderful series & will start listening to the third book as soon as possible.

incidentally, for the benefit of female readers, the characters in these books, many whom are female serving in what in the past may have looked at as strictly male rolls such as drill sergeants,captains, generals, admirals, presidents, and the like, and not simply as "love interests", should make these books a pleasure for not only men but women alike.

In short, this series of books has become such that I find difficult to put the books down. They also are the type of wonderful novels where time seems to slip by with uncanny speed.

Oh, & as I said, I believe there is but 4 books in this series. As such I can only hope the author will find it in himself to add a fifth or even 6th book to the series.

I was very surprised by this book and series in general. Though provoking, intelligent it was a very enjoyable experience. In addition, my military background made his books even more interesting.

My thanks to the author for a great series.

Great end of to the sequence. I hope we see more.

Each novel in this series is better than the last. The hidden depth to the plotting comes full circle here. The bad guys aren't purely bad and the good guys aren't purely good. In fact, the author could have ended series in triumph without touching any further on the criminality that may have been necessary to ensure such a victory. He doesn't. Nobody gets off the easy way. As has been the case all along in the series, the characters are well developed and not static, the politics are more mature and the description of corporate intrigue are given more thought than the generic corporate bad guy in an SF novel. Oh, and the battles continue to be fast paced and brutal.

These series stayed playing on my phone! It had a super narrator which kept me glued to the story!

the end subjects the beginning to the weight of eternity and beyond the woss of fourteen.

A worthy conclusion to the trilogy.
Some of it a bit to convenient but very enjoyable.