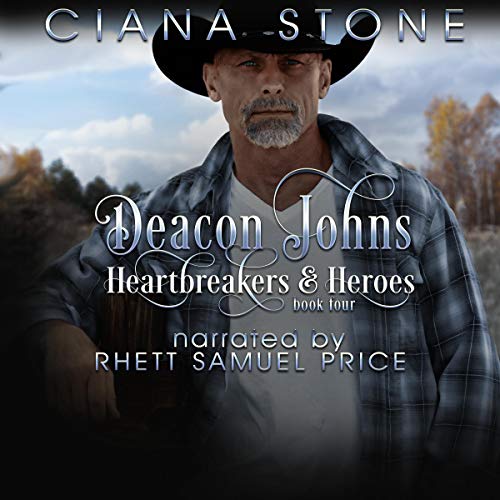 He's a natural born leader and as commander of a Seal team, spent most of his adult life doing just that. Now he's training men to become fighting machines - still in command. At least of the men in his charge. When it come to his love life, he is about to find himself spinning out of control, and he's not quite sure what to do about it. It's rare he meets a woman he wants more than a night or two of pleasure with. Rarer still to find one that intrigues him. To meet a woman who surpasses those expectations is unexpected, exciting. And something he can't let himself indulge in. He won't let himself become involved. She has other ideas.

Deacon Johns meets Mica Gray Horse and there is an instant attraction however he thinks he is too old for her. Mica feels the same attraction and she is determined to show him that age is not a problem. Unfortunately Mica’s past may get in the way. This was an exciting, romantic story with some suspense and twists that made the story well worth the listen. In fact it is definitely one that I will listen to again and again as I will all the books in this series. Rhett Samuel Price once again does an exceptional job narrating. His voices and emotions are always spot on. I received a free copy of this audiobook and have voluntarily provided an unbiased review.

I can never get enough of these books! So much fun, so much adventure, sadness, happiness, tears and joy! Forever and always will this series be a favorite! Ciana Stone and Rhett Price make the most beautiful team for author and narrator. I never want these books to end! A must read for everyone!

This series just keeps getting better. I love the closeness that these Seals have together and when they fall in love they fall deep. This book is amazing to listen to and I can’t wait to dive into the next!

This story pulls you in and drags you along for the ride through the good and the bad, through intrigue and deception

The narration was alright

****UPDATE- AUDIO VERSION 16 MAR 20****
I am so glad I read the book before listening to the audio version. Even in a bad review, I try to find something positive to say. So, I will say that the narrator probably had to audition, and spent hours recording. I have to give credit where credit is due.

Not every woman has a high pitched tone of voice. There was also an accent that I didn't know what It was supposed to be.


****ORIG. REVIEW 01 MAR 18****
The attraction Deacon and Mica have is immediate, and intense. In spite of that Mica works to woo him with the help of her friend Nellie Mae.

Both Deacon and Mica have dark secrets in their pasts and Mica's secrets are set to rise to the top.

I liked Mica. She was strong, smart, and sassy. She was a good person who loved her brother and was generous by nature. She brought out the best in Deacon, and their banter was both sassy and funny. Some of the best scenes were with Bernice and Nellie Mae.

Deacon struck me as the strong, silent type, but he was able to relax when he let Mica in his life.

There were a few edge of your seat moments when I didn't realize I had been holding my breath through them until I started to breath again.

I honestly don't know if this book should have been titled Deacon Johns, or Mica Gray Horse. I'm hoping Matty and Willow get their own story soon.

I voluntarily read and reviewed the Advanced Reader Copy.

Your Going To Love This

Deacon John's by Ciana Stone is a book in the Cotton Creek Saga Heartbreskers and Heros book 4 this story of Deacon and Micah.It's exceptional and emotionsl. You will.be drawn in by the great characters and story. I recommend this.