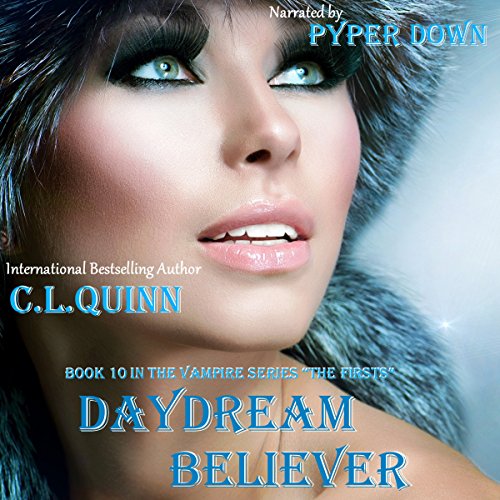 By: C. L. Quinn
Narrated by: Pyper Down

Zach had been searching for an adventure worthy of a vampire. In the harsh beauty of a Siberian lake, he found it. An ancient burial site brings mystery and danger to vampires who have walked this world for over 1,000 years. As he surveys the stunning, icy landscape and considers his next adventure, the woman he'd left two years ago, a magnificent older vampire, has finally decided that she loves him...hasn't she? She shows up, aggressive, sexy, and jealous of the beautiful vampire he's traveled to Siberia with, to stake her claim. All he needs to know now is: will she run again when he finally accepts her love?

Dez has been searching for the man who'd walked away after she declared that she would never love him. In a frozen land, she finally finds him to let him know that she'd lied. It's just that it's so hard to actually admit it, to give away her heart so that it can be stomped on. What else could she expect? But after two years of loneliness, she decides that she doesn't want to live these endless years without him. He makes her laugh, he's a spectacular lover, and most of all, she knows that he loves her, no matter how tough that is to do. When she finds that he's in Siberia, she travels from her home in South America to let him know that she can finally admit what he's told her all along...she loves him and doesn't want to live without him. Walking into a little club in the isolated ice-box on Lake Baikal, she finds he's traveled there with a gorgeous vampire. Dez has never played nice when she wanted something, but this...Zach...was she too late?

Dez and Zach's story, started in book one, continues 10 volumes later. When you're immortal, how easy is it to fall in love forever?

Would you listen to Daydream Believer again? Why?

I would liste to this whole series again!

What other book might you compare Daydream Believer to and why?

I wont compare it...it was unique and fantastic!

Yes and I stayed up all night and did!!!

OMG this one made me openly sob like a baby!! I ugly cried and screamed out several times!!! I love Dez and I am so glad her and Tam reconciled...this was a very emotional listen and I am moving on to book 11 now...I love this series!!!

I AM BESIDE MYSELF!!

C.L. Quinn continues to pull me into the Family of the Firsts! There has not been one book where I didn't feel every emotion possible, and this one was No different! There is one party that I cried myself into a blubbering mess! You will know what I'm talling about!! Let the Sunshine In! Pyper your are a TRUE vocal artist! I will forever LOVE to hear to tell me a Story! Thank You for another wonderful ride!!

WOW.. so much happened and is happening to this woman. this book is also a great lead into more storylines and adventures. True loved it so worth the wait!

So in Love with The Firsts

I love losing myself in this series of The Firsts. This book as all the others in the series brings to life amazing characters and an awesome world. I would highly recommend listening to this series in order, it brings the life of The Firsts together and the Narrator Pyper Down does a most amazing job. I highly recommend Daydream Believer to all that enjoy Vampires, story telling at its best and a Narrator that is a perfect match for this amazing book & series.

Edge of your seat exciting...

What a thrilling story! I was glued to my chair throughout this book. I even cried at one point. This story is a paranormal romance thriller! The author totally amazes me as to where these stories take us! I hope this series never ends, it is that good! I find it so comforting to see familiar old friends from one story to the next too!

In this book it is Tam's and Desi's story. Tam's sister had tried to kill her , well actually did kill her and she had lost her baby. That is where this story picks up at. The author, C L Quinn (T C Butts) gives us another fabulous chapter in the First Bloods Saga! I have read / listened to every story in this series so far and every single book is a hit! Never a dull moment, yet every time something happens or a new character is introduced in the family, I never saw it coming! The narrator, Pyper Down is flawless on her delivery of this book and her accents and voices are spot on in each book! I swear I feel like I have my back turned to a movie each time. Kudos to the author for keeping the same narrator for the entire series... You Both Rock!!!

I received this audio book as a gift in exchange for a honest and unbiased review.