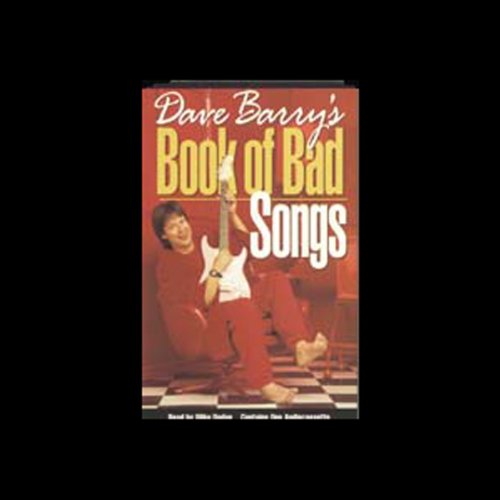 When funnyman Dave Barry asked readers about their least favorite tunes, he thought he was penning just another installment of his weekly syndicated humor column. Instead, Barry found himself buried in responses in what turned out to be his most popular column ever. This program is a compilation of the results of Barry's Bad Song Survey, a definitive collection of the worst songs ever written. It is divided into such categories as Teen Death Songs, Songs That People Always Get Wrong, Songs Women Hate, and, of course, Weenie Music. From "MacArthur Park" to "Feelings," from "Dreams of the Everyday Housewife" to "Leader of the Pack," Mike Dodge, who considered this his most harrowing recording session, guides you through the world's worst lyrics.
©1997 Dave Barry (P)16 9; 1997 HighBridge Company

Dreadful, dreadful narration. I would have loved to laugh more and I could hear that the content was funny - it just did not sound funny when read by this narrator

Unfortunately, I didn't pay attention to the last review and wasted my money on this boring piece of trash. I figured I couldn't go wrong with Dave Barry.......well, I did! This audio was so excruciating, I couldn't even get through the whole thing! If I could give this NO STARS, I would! Don't waste your money!

The truth is, choosing bad songs is quite obviously a subject enterprise. I could easily add 50 titles to those mentioned. Then again, I must say many of the songs that made the list I did not find all that objectionable. Sure a dorky line or two is easily criticized, but there’s more to a song than a bad phrasing in a single lyrical phrase.
That said, many songs that made the lists are quite universally hate worthy “I want a BRAVE man. I want a CAVEMAN” Seriously?!?!?!
Still, no matter where you land on a love/hate continuum for any mentioned song, Dave Barry will make you laugh out loud!!!!
Only one criticism: I wasn’t wild about the reader - perhaps because listening to Dave Barry is far more enjoyable.

This book will put bad songs in your brain!

This is a fun, silly listen. I love Dave Barry's humor and this is a great example of it. The fact that this was written in the 90's doesn't diminish the fun