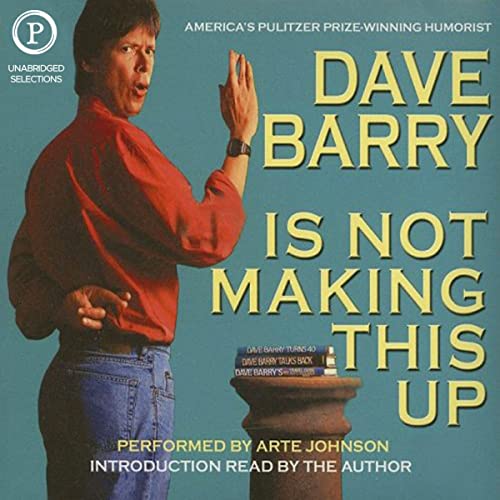 Dave Barry Is Not Making This Up

By: Dave Barry
Narrated by: Arte Johnson
Try for £0.00

Since Dave Barry writes about weird things, you might be tempted to think he has a weird brain. He does, of course, but that's not the whole explanation: A lot of the things he writes about—exploding Pop-Tarts, for example—are real. Join Dave as he examines UFO thrill-seekers and Elvis-worshippers, runs for president, and plays Claptonesque guitar in the world's most literary band that includes Stephen King (The Rock-Bottom Remainders).

In Dave's world, amazing but true adventures occur every day, as the Pulitzer Prize-winning columnist investigates a ground-breaking anti-flatulence product recommended to him by a justice of the U.S. Supreme Court; the ecologically dangerous shellfish attacking women's undergarments; and the epidemic of snakes currently appearing in people's toilets. Warning: Dave Barry has a knack for giving his listeners a few laughs and lots of expensive merchandise (ordered from the Home Shopping Club). No, we're not making this up!

What listeners say about Dave Barry Is Not Making This Up