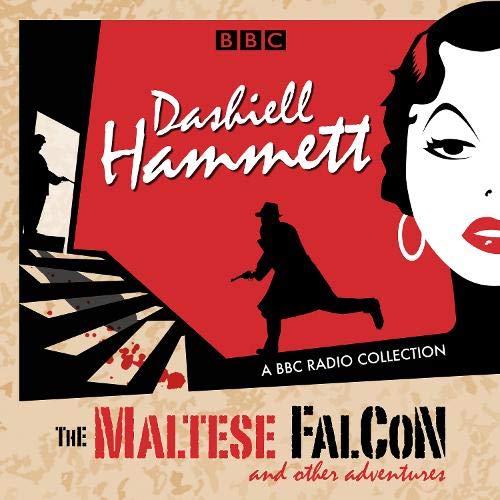 The godfather of the hard-boiled detective novel, Dashiell Hammett is widely acknowledged as one of America's greatest mystery writers. This collection brings together the BBC radio adaptations of his works for the first time, including the iconic The Maltese Falcon, featuring his most famous character: Sam Spade.

San Francisco, 1928. When his partner is murdered on an assignment, private detective Sam Spade is drawn into a dangerous case involving a treacherous femme fatale and the priceless black statuette of a falcon.... Tom Wilkinson and Jane Lapotaire star in this thrilling dramatisation of Hammett's most famous novel.

New York, 1934, and Secret Agent X-9 is about to embark on his most deadly mission yet. Falsely accused of murder, he struggles to stay one step ahead of the law in his relentless pursuit of his arch enemy, 'The Top'. Dramatised from a comic strip co-created by Dashiell Hammett, this tale of mystery, murder and mayhem stars Stuart Milligan, Connie Booth and William Hootkins.

The Man Who Killed Dan Odams

An escaped killer fleeing cross-country stumbles upon an isolated farm in Montana, inhabited by a woman and her young son.... This mysterious and brooding noir western is read by Stuart Milligan.

Other parts played by the cast

The Man Who Killed Dan Odams

What listeners say about Dashiell Hammett: The Maltese Falcon & Other Adventures

This is an awfully disappointing adaptation from the BBC, mostly because the performances are so... odd.

The Maltese Falcon is alright, but suffers a bit from the very common problem of modern adaptations, where everyone tries to sound like Bogart, Lorrie, and others from the movie.

But the X-9 stories are hard to take seriously. Just to give a few examples:

The overly blustery and cartoonish "Doctor".

The needly, high pitched fakeness of the police captain.

All of it combined make the stories impossible to listen to without groaning.

I got this after enjoying the BBC Marlowe series with Toby Stephens, as well as all the Paul Temple collections. I was expecting it to be a bit 'hammy' but that's part of the enjoyment. However, this was over the top, even for this genre and era the stories are set.Wasn't able to finish it.

this collection of BBC radio broadcasts is a great way of enjoying Hammetts works again .