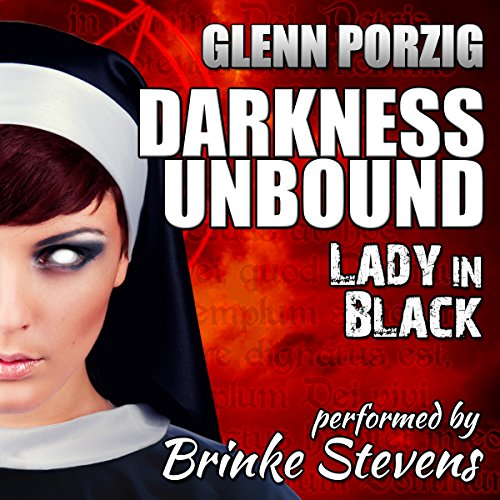 A detective investigating ritualistic murders, a nun whose faith will be challenged, a supernatural killer with an unholy agenda...their souls forever tied together by a dark secret.

The first book in the Darkness Unbound series that has been called an "intense thrill ride" and an "entertaining mix of mystery, pulp and the occult."

What listeners say about Darkness Unbound: Lady in Black

Porzig and Brinke Stevens Give the Devil His Due!

Porzig’s narrative reads like the pilot to a supernatural cable TV series that combines the investigative odd couple aspect of “The X-Files” and the cops VS demonic possession themes of “Deliver Us from Evil” (2014). The hook is definitely the beautiful and tough Lady in Black herself, Sister Marian, suffering from debilitating guilt for her role in the murder of her own parents.

Stevens’ narration lends just the right voice to Sister Marian, with a mix of vulnerability and toughness, and handles the rest of the cast well too. Brinke’s many years of experience in the horror genre provides the listener with a jolt of nostalgic fun when she embodies the voice of the demon as well.

Darkness Unbound into the light.

What made the experience of listening to Darkness Unbound the most enjoyable?

It would have been a great read, but was much better as an audiobook with Brinke Stevens performing this word play.

Yes, without giving anything away it was a roller coaster ride of who was next on the list of the evil.

What does Brinke Stevens bring to the story that you wouldn’t experience if you just read the book?

Brinke's voice could make reading the phone book a wonderful experience. She brings her wonderful acting skills in to listening to this tome.

Glenn's description and Brinke voice makes me wonder, if this becomes a movie, "will they have enough blood"?

Performed by Brinke Stevens and written by Glenn Porzig makes a wonderful combo.

Porzig has created a strong and believable cast of characters with Darkness Unbound: Lady In Black. It starts off a bit slow but then picks up the pace in a big way. For much of the story I thought I had the plot pegged, but then it surprised me. I had chills by the end, and wanted more. The narration by Stevens was at times too expressive (if that's possible) but she did a wonderful job of changing her voice to represent each speaker, tackling even accents and languages with ease. As a team, Porzig and Stevens sent chills down my spine on a few occasions. While there are some repeating words and phrases now and then, overall the story is good and held my attention, which can be hard to do. Recommended for anyone who wants an intense thrill ride with a touch of religion and horror.

A great reading really helped out this story.

I enjoyed this book largely because of the reader. Brinke Stevens' rich voice really brought this story to life. The writing itself, although interesting and full of plot twists, was a bit cliche at time. I think Porzig will mature and develop his own voice. I look forward to the next one.

Great performance of a gripping story

A great story that kept the listeners guessing. I love that it plays out like a movie when read by Hollywood horror legend Brinke Stevens! She changes her voice to suit the character, which really helps to differentiate when listening. I want more Brinke narration and more Glenn stories!

IF YOU BELIEVE IN GOD AND THE BIBLE, YOU HAVE TO BELIEVE IN DEMONS
I got this on a whim. It is a cliché story with cliché characters. A lot of reviewers have raved about the narrator. I thought she was alright, but I was not that impressed. I guess you have to already be a fan?

We all have our demons. Some are stronger for it.

Would you consider the audio edition of Darkness Unbound to be better than the print version?

I never read the print version of "Darkness Unbound".

Sister Marion is by far my favorite. The strength she has gained from battling her inner demons equips her with the skills she needs to survive. She's not perfect, nor tries to be. Her flaws make her much more easy to relate to. We need more stories with strong female characters.

What does Brinke Stevens bring to the story that you wouldn’t experience if you just read the book?

Brinke Stevens really does a fantastic job bringing the villain to life. I don't think simply reading the book would've had as strong an impact on me.

While I easily could've listened in one sitting, I listened to the book in 4 sections.

With strong religious and supernatural overtones, this first book in the series does a terrific job setting up a dark, creepy, entertaining world that makes me want to come back for more. Having a very strong female lead character makes it even better. While the subject matter is dark, which the title makes obvious, the author knows how to mix in just the right amount of humor to keep the subject matter from being overwhelmingly so. I'll definitely be checking out the second audio book in the series soon.

Brinke brings Glenn's Character to Life and How!!!

Where does Darkness Unbound rank among all the audiobooks you’ve listened to so far?

I think this audio title is right up there and I was totally knocked out by how much life, Brinke Stevens brings to the various roles. The voices were wonderful and the range was totally believable and reminds me of the fact that Brinke actually speaks about six languages, on top of a vast array of film roles, and neither prepared me for the range she brings to characters as varied as the amazing Sister Marion to all of the male characters as well. "Mary, Mary quite contrary..." Ah, but she is not taking the devil's work laying down!!! From vagrant to whom next....

The plot was terrific both because it is a good murder yarn, but because of the presentation of the reader. Brinke makes you feel for Mary Carver... the helpless child or the Lizzie Borden of her time? There is no doubt that Brinke's long history, not only playing in the horror genre, but also has also been a writer and movie maker herself, so she knows how to connect with her listeners in this genre. One of the best ways to keep a listener tuned in, is to have someone who makes you feel you are part of the story and this is where Brinke excels because she is in your head telling the story, but always keeps you involved in the action. The biggest mood killer in the thriller genre is someone who doesn't grab you at the start and keep you involved all the way to the denouement. Brinke could sell ice cubes to the Eskimos simply because she wants you to keep listening to the very end. No one gives good voice like Brinke does...

Have you listened to any of Brinke Stevens’s other performances before? How does this one compare?

I had only seen Brinke on screen before, the last one was a film with her young protege, Tiffany Shepis and it feels so different to listen to her, rather than watch her on screen, where she is something of a horror sex siren. This story gave me the chance to listen rather than look at Brinke, and I was surprised by how much range she can give to Glenn Porzig's characters. As my mother has been legally blind for over a decade, I often check out various thrillers, murder mysteries for her, because she loves this genre too. So I will also be recommending to her to add Brinke's stories to her many other favourites like Michael Connelly, Lee Childs, David Baldacci and many many others.

When a lady arrives dressed in black, the bodies will still leave in deathly white.

No doubt, I will be checking out more of Brinke's books in the future. I like to have a book in my hand and the words clinging to their white pages, but taking a journey with Brinke (and all good readers) makes the journey something different from time to time. Years ago, the longest book I had ever heard was read by a monotone reader in an 'orrible Aussie accent and I don't know how my mother ever finished a book that sounded like it had been written on a band-saw and read by a man who had ingested the same-said band-saw!!! When you read a book, you are reading a book that can be good or bad... when you listen to a book, not even the best book in the world can be enjoyed by the listener, if the reader speaks like a migraine blessed with the ability to breathe!!! A good reader can make or break any story, and Glenn Porzig is blessed to have Brinke breathing life into his dark demonic yarns...