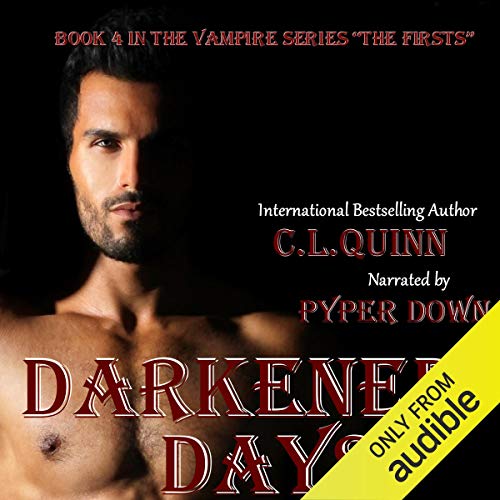 Jacob had searched for her for two months. Taken by rogue vampires, Starla had disappeared without a trace. An innocent, sweet girl from a remote Alaskan town, the human friend of a powerful first blood vampire, she had no idea the vampire world existed. Now, a lead sends him to Paris, to a cadre of young vampires that run the city at night, breaking rules and risking the vampire community's sacred covenant for secrecy.

When he finds her, she's been changed. She's vampire now. He barely recognizes the angry, oversexed girl as the one he'd met briefly and saved just months earlier. It doesn't help that she turns him on like none of the beautiful experienced vampires he's always preferred.

Paris at night is gorgeous, the city of love, a place to make love and be made love to. But not for Jacob, who wants to save this lost girl, and ends up on the wrong side of justice.

Jacob and Starla's story starts in southern France and ends in South Africa, as a young newly “made” vampire learns how to accept who and what she is now, to understand what may be the greatest gift of her life. To find out that love can come in the most unlikely ways while life happens regardless of choices made. That sometimes destiny really is written in the stars.

This story is beautiful on its own, but continues the series of first blood vampires started in Forbidden Days. If you enjoy Starla and Jacob's story, try the other three books in this series to see where it all began.

IT WAS TOTALLY AWESOME!!!!

Would you listen to Darkened Days again? Why?

Absolutely. When I listened, I was fascinated and anxious to find out what would happen next. The story was very intricate. I feel, during a second pass, I might pick up on details I missed the first time around. Besides, I always listen to my favorite books multiple times!

I really liked Starla. I just felt drawn into her situation as she struggled through the beginning (avoiding spoilers here lol), feeling her way through her life and then finally coming to a place where she could feel peace about where she was at.

Which character – as performed by Pyper Down – was your favorite?

I really liked Koen (sp). I liked the bit of Scottish accent I heard now and again.

Oh yeah...I think I managed it in about two "sittings". I love audio....those "sittings" can be done while exercising, driving, doing dishes, etc.!

I am dying for the next book! It's on my automatic buy list!

If you could sum up Darkened Days in three words, what would they be?

What other book might you compare Darkened Days to and why?

I don't like to compare books to others because if someone didn't like the book I compared it to, they wouldn't like this book on that basis and that isn't fair. All books should be judged individually!

Which character – as performed by Pyper Down – was your favorite?

I would have to say Starla (pretty name too). Starla is kind, sweet, romantic & devoted! She can be hot tempered too. Starla knows what she wants & isn't going to take crap from anyone.

I love this series! I love how I keep meeting up with familiar characters from previous books. This book caught my attention from beginning & held my interest all the way through the story. The plot is great. The sex scenes are really hot! I enjoyed listening to Pyper Down's multiple voices and the accents are awesome & spot on! The french accents rocked! I truly enjoy reading these books written by CL Quinn! What a great story teller she is!

Would you consider the audio edition of Darkened Days to be better than the print version?

Isn't it always? But I only listened!

All of it! I love this family of vamps!

I like Pyper a lot..she is the queen of accents!!!

I am super addicted to this series...I have already bought the next 2 books, and cant stop listening!! This is Starla and Jacobs story.... After being abducted and turned vampire without her consent..Starla is not happy...she is being physically violated and living in horrible conditions for a vampire...Jacob finds her, just to lose her again and then he gets kidnapped and violated against his will...after escaping he finds Starla again and they never want to let each other go...The thing is Amos a very strong firsts Vamp wants her also..they are meant to be together and have first children...can Jacob and Starla make it work?

Totally loved this, and am moving on to the next one now!! I highly recommend...each story can be listened to as a stand alone, but I do recommend starting with book 1!

an awesome vampire story...twists and turns and surprises around..marvelous vampires with new powers i have never seen before.

ANOTHER PEACE OF PERFECTION!!!

I keep falling more in love with this AMAZING Series!! C.L. Quinn is an absolutely amazing story teller! You truly get fully immersed in the lives of her characters!! Starla should never have been brought in this life, but fate has a waybof getting it's way!! Even if it has to bring 3 totally different people together in the end!! This book had so much emotion in it!! The lives of these amazing people are truly changing!! I CAN NOT WAIT for the next book!! Narrator Pyper Down is on my short list of favorite's!! I love her sultry sound!! And she is moves the languages so seemlessly!! She has yet to disappoint!!

This was a good addition to the series. Very quick read with another crazy female. I can,t wait hear the next book in the series. I love following these characters.

MY FOURTH FIX OF THIS GREAT VAMPIRE SERIES

This is a great vampire series to follow…. each book has it's own storyline but there is a continuation of a secondary storyline running through them and the tension is building. So, to get the history/backstory of the Firsts (original vamps who have added abilities, super-strong plus more) and to get the most from this series, IMHO, it would be best to start with book 1.

Jacob is on the hunt for Starla who's gone missing after he gave her only enough blood to heal her injuries and the hunt takes him around the world following some newly made vampires that are getting a bad reputation. But is Starla amongst them, who's turned her and why? It's an exciting plot with lots of drama, romance, sex and adventure because Jacob's journey hits some problems when he discovers Amas, who is one of the Firsts, has his fangs ready and plans for the missing Starla.

Worth a credit? If you're like me a love a good PNR with drool-worthy vamps then it has to be a YES.