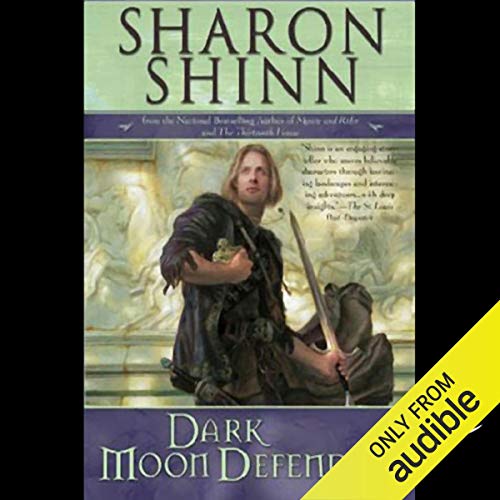 By: Sharon Shinn
Narrated by: Joe Barrett
Try for £0.00

The Rider Justin is sent to the small town of Neft, so he can spy on the nearby Lumanen Convent, where the Daughters of the Pale Mother reside. He quickly learns that Coralinda Gisseltess, the leader of the Daughters, is indeed persecuting mystics and the people who shelter them.

Even more quickly, he falls in love with Ellynor, one of the convent novices. But the courtship is perilous in the extreme. Not only does Coralinda hate the king and the king's Riders, but Ellynor is from the Lirrenlands, where women are not allowed to take lovers outside of the close-knit clans. If her brothers find out about Justin, they will insist upon a duel to the death...and if Coralinda finds out that Ellynor is a mystic, Ellynor's own life will be instantly at risk.

"Shinn....paints their journey with a lyrical grace and deep appreciation of camaraderie reminiscent of Diane Duane at her best." (Publishers Weekly)

Great book, let down by the narration.

This is probably my favourite book by Sharon Shinn. It's got action, romance, world and character building. However, what is going on with the narration?! Cammon's accent in particular is extremely grating to listen to : a sort of mock cockney which just sounds ridiculous, particularly to British listeners like me. Also, why is Donnell Irish when no one else in Danalustrus speaks with an Irish accent? Don't use regional British accents unless you are going to put some effort into getting them right. Otherwise your are going to alienate part of your audience who don't appreciate having the way they speak being (badly) imitated.

Cammon now has a cockney accent and Donnal has 'a bit o' the Irish brogue in him'.

It's unfortunate when narrators are changed mid-series. I understand why the change is made in this series so far. The first 2 books are primarily from the point of view of a woman (the 2nd especially). This book, although it doesn't always come from Justin's viewpoint, it is apparent that he's the main character.

I'm new to the audiobook world. I find that I can read a book about 3 times as fast as I can listen to it. Many times that is because I skip tedious parts, like expositions on how the fire burned through one's veins and there was an explosion that changed the world in that one kiss. The first time a couple kisses, ok - but every time? I also find detailed descriptions of sword fighting tedious, but so far there's none of that in this series.

I'm 'reading' volume 3 now and will buy the next two volumes because I am interested in the characters and where the series will ultimately go. I have found that the books don't really reach a huge crescendo and a resolution. Instead, there are minor ones. You might learn some valuable bit of information and the culmination is a report to the King. Each book so far has been a bit formulaic in that there's always two people who are madly in love and for whatever reason, can't be together. After hours of listening to them torture themselves, they will finally resolve the issue - though not always as the reader would like (which is refreshing).

All in all, it's a good series. Well defined characters, strong plot line, danger, intrigue, magic, sword fighting - all the usual things that make a good fantasy series. I wish that in series like these, the author would clearly define to the narrator(s) how the characters sound. If I had heard Cammon with a cockney accent from the beginning, I wouldn't be having difficulty with him now.

In the end, I recommend this series because of it's strong points!

Wonderful Book; Not So Great Narrator

If you love the voice of the Geico gecko, you should not be disappointed with this reading. Every time Cammon has a line you think of the sweet little green guy. However, I don't find any redeeming value in the female voices. The book is my second favorite of the series, but this narrator just does not do it justice. Expect more of the same in Reader and Raelynx, but I bought it too just because I love all of Sharon Shinn's books.

I agree with the other reviewers regarding the narration of this book. I am currently listening to the series again. I think the series is a lot of fun, but it would be so much better if all five books had been narrated by the same person. After listening to the first two books you really come to know the characters by their "voices". I found it hard to follow the story in this book at first because I had to re-learn all of the voices again. I agree that the voices for both Kira and Cammon are terrible.

I highly recommend the whole series of five books because of how much fun they are, just be aware there is quite a change after the first two.

I've listened to all 5 books in this series and really enjoyed all of them (okay, I was a little put off in book 2 by the lack of morals by the main character, but since she did what she could to rectify the situation I forgave her).
I do wish that they would have the readers listen to previous books so they'd have an idea of the accents used.
I also hate that it made Kirra sound like a simpering idiot.
But I do like all the story lines and have listened to all 5 books at least 3 times. Nice light romances (which I didn't think I'd like but have now started looking for similar books).
If you can ignore the change in accents, all the books in this series are well worth listening to.

I can't stop thinking about this wonderful series

This series is out-standing. I just can't get enough of this continuing story. Like others i found it hard to get used to a new narrator but after the first 3 chapters i settled into the book and forgot the narrator had changed. A true 5 star book once again..

I loved this book, almost as much as the first two. However, the narration left something to be desired. I adored the first two books, and I understand the reason for the switch to a male narrator for this one, but I would rather have listened to Justin's POV narrated by Jennifer Van Dyck. Barrett's female voices were just terrible, and there were changes in the characters' accents from the first two books. I did get used to Donnal sounding Irish, but when Cammon's accent started fluctuating, I got annoyed and took advantage of my WhisperSync instead. If I hadn't already bought Reader and Raelynx on audio (prior to listening to this one), I probably wouldn't have.

For all that there are scary bad things happening in the kingdom, there are some violent scenes, and the main characters are adventurers for their king, this series has a light and easy feel. This third installment is Justin's story, and is the most straightfowardly romantic of the group to date. Trust the gruff guy to fall the hardest for a damsel in distress! This is feel-good fantasy. All the main characters from the previous books make appearances, but Justin and Ellynor, a new character, are definitely the main characters this time around.

The switch in narrators threw me at first, but I quickly adjusted. This narrator's style is quite different from the previous reader's and yet they both suit the storylines in their own ways. Listening to this felt a lot like being read a bedtime story -- in a good way -- and somehow that really fit. I was bemused!

I really enjoyed this book -- and the whole series

I'm a series junkie and there's nothing I like more than 3 or 4 great books, one right after the other, featuring a great story with great characters. This was a wonderful tale and Justin really won my heart in this one. Great narrator in Joe Barrett, though if he continues to read these books, he really needs to work on his Kira interpretation. He makes her sound like an old queen -- not a young princess. otherwise, great job! Highly recommended!

I keep coming back to re-read this!

This series is AMAZING. Dark Moon Defender is my favorite of the series! I feel like I'm a part of this friend group and I care deeply about the well being of everyone. That says a lot about Sharon Shinn's writing ability. Highly recommend.

A few caveats for this review:
(1) I've read these books a few times before and always enjoyed them, so I already liked the story and the relationships between the characters. Interesting world building and in-depth character studies, but nothing that is going to blow your mind or shake up the genre. The mix of fantasy and romance (pretty tame romance actually) is nice and entertaining.
(2) I also really enjoyed the narration for Mystic and Rider and The Thirteenth House. I get why they switched to a male narrator for books 3 and 4, but I started off a bit disappointed so I was already a little biased against the narrator from the beginning.
(3) I immediately recognized Barrett from his narration of Bonfire of the Vanities, which was really good but given that all of those haracters are pretty terrible people it threw me off at first.

With those caveats, I thought he did a good job with the main characters, especially the new ones (Justin, Ellynor, the Lestra, Senneth) except for two fairly important supporting characters--Kirra and Cammon. The voice he used for Kirra was only a bit annoying, but the accent for Cammon morphed midway through the book from the more proper English accent Van Dyke used in books 1 and 2 to a horribly grating cockney accent. Luckily he only appears in a few scenes here, but it is so bad that I am probably not going to get book 4 since he is the main character and I couldn't take it for a full book.