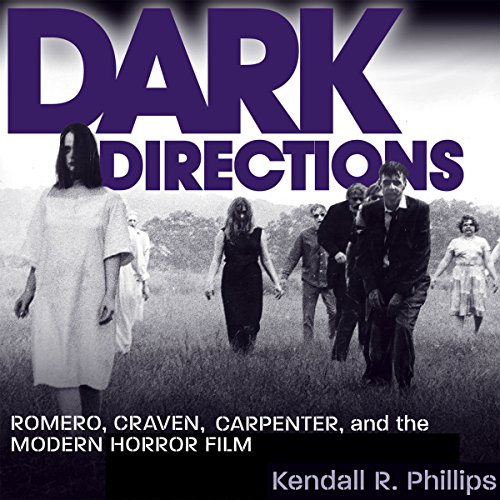 A Nightmare on Elm Street. Halloween. Night of the Living Dead. These films have been indelibly stamped on moviegoers' psyches and are now considered seminal works of horror. Guiding readers along the twisted paths between audience, auteur, and cultural history, author Kendall R. Phillips reveals the macabre visions of these films' directors in Dark Directions: Romero, Craven, Carpenter, and the Modern Horror Film.

Phillips begins by analyzing the works of George Romero, focusing on how the body is used cinematically to reflect the duality between society and chaos, concluding that the unconstrained bodies of the Living Dead films act as a critical intervention into social norms.

Phillips then explores the shadowy worlds of director Wes Craven. In his study of the films The Serpent and the Rainbow, Deadly Friend, Swamp Thing, Red Eye, and Shocker, Phillips reveals Craven's vision of technology as inherently dangerous in its ability to cross the gossamer thresholds of the gothic.

Finally, the volume traverses the desolate frontiers of iconic director John Carpenter. Through an exploration of such works as Halloween, The Fog, and In the Mouth of Madness, Phillips delves into the director's representations of boundaries - and the haunting consequences for those who cross them.

The first volume ever to address these three artists together, Dark Directions is a spine-tingling and thought-provoking study of the horror genre. In analyzing the individual works of Romero, Craven, and Carpenter, Phillips illuminates some of the darkest minds in horror cinema.

“Despite the powerful influence a number of their remarkable films continue to exercise, John Carpenter, Wes Craven, and George Romero do not often receive the sort of auteurist analysis provided by Dark Directions. This book will be especially eye-opening for those relatively unfamiliar with the careers of these underappreciated directors, as Kendall Phillips describes their work in ways that encourage the reader to seek out the films for a closer look.” (Adam Lowenstein, University of Pittsburgh, author of Shocking Representation: Historical Trauma, National Cinema, and the Modern Horror Film)
“In Dark Directions, Kendall Phillips offers scrupulous readings of the film rhetorics of auteurs George Romero, Wes Craven, and John Carpenter, showing how they engage the anxieties of contemporary culture in thematic explorations of the body (Romero), the Gothic (Craven), and the frontier (Carpenter).” (Thomas W. Benson, Penn State University)
“ Dark Directions makes good on its promise to place Carpenter, Craven, and George Romero within the pantheon of important '70s filmmakers. Discussing the themes and storytelling abilities of each director, Phillips has a definitive case for their inclusion with the likes of Martin Scorcese in terms of influence.” (Nick Spacek)

Some decent analysis if you can stay awake

The first challenge that I had with this book was making it past the almost two hours of the author telling me what he was GOING to talk about before actually getting to the content in earnest. The analysis of each work feels a bit stretched. Reminds me of when I was in college and tried to BS my way through a essay by applying small amounts of theory and stretching them in an effort to substantiate my position. The narrator is un-enthused which adds to the pain. Especially grating is the attempt to speak with an Austrian accent when quoting Freud. All in all there are some worthwhile nuggets, but the work as a whole left me feeling 'MEH'

This is a well written but very dry book, but it takes its subject deservedly seriously. Refreshing.

What disappointed you about Dark Directions?

This is written like a poorly done term paper or lecture by a professor that does not really know his material but has read other's reviews of the films and feels he is entitled to give his opinions anyway.

Phillips spends less than 20 minutes on "Halloween", a movie that changed horror forever (by bringing the horror into a regular neighborhood instead of requiring the characters to go to the haunted house on the hill, the deserted motel in the middle of nowhere, etc), yet Carpenter is listed as one of the 3 directors that will be covered in the book. You advertise that you are going to discuss a director, and his most famous work is given mere minutes in such a rambling book.

The premise here is not a knowledgeable review of the works, but instead an author giving his psychoanalytical review of the films, which you get the feeling he has read reviews about but not actually seen. I could not get over how poorly done and vague it was while supposedly focusing on just 3 directors and their works.

I read "Shock Value" after reading this and it did a much better job of covering the material "Dark Directions" claimed it would.

My next listen after this was "Shock Value". A much better attempt at similar material. From there I moved on to Sherry Lansing's "Leading Lady".

I gave 3 points to the performance for being clear, loud enough, and a voice somewhat appropriate to the material. I am finding some books are not produced loud enough to play over speakers or even headphones with enough volume. I have nice speakers, but they can only amplify what they are given.

I did not find anything redeeming in the book. It was worse than most college essays. I am guessing this was written by a professor or someone like that he accepted a grant to write about the genre but didn't actually know the genre. I had a film studies professor who thought "Goodfellas" was a fictional story directed by Michael Scorsese. MICHAEL?!? When debated about such things, he held to his being an expert.... an expert that could have read the DVD dust cover and been more informed. Reading this book felt very much like being back in that class.

Read "Shock Value" if you want to get the material promised and save yourself the cost and time I invested in this book.