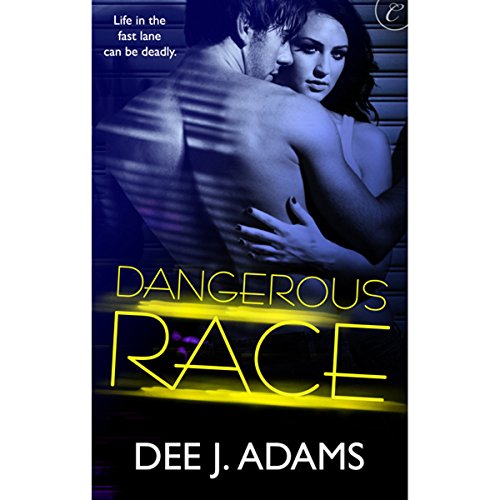 Four years ago, race-car driver Tracey Bradshaw almost died in a horrific crash. Now, scarred inside and out, she's making a comeback, but her team is plagued by a series of "accidents".

When the team leader dies under mysterious circumstances, former driver Mac Reynolds takes charge. The pair clash as Trace resents his high-handed attempts to control her, while Mac fears Trace's recklessness will get her killed. Neither can throttle back the desire that spins out of control whenever they touch. Trace lets herself be seduced when Mac convinces her he finds her beautiful despite her scars, and she begins to hope for more. But Mac knows he's not nearly good enough for Trace….

What listeners say about Dangerous Race

Not too bad but every 3-4 seconds all you can hear is saliva. Other than that not too bad

I Couldn't Put It Down

It was a great book, I couldn't put it down. It had lots of tangents which kept you reading. I would have given the reader 5 stars if it wasn't for the fact that you could hear her swallow through out the book which I found annoying. Other than that she was brilliant.

The protagonist had no credibility. The book starts as a female race car driver--supposedly intent, dedicated and determined to succeed from a young age--is tearing around turns at over 200 miles an hour, setting track records. While she should be listening to her engine and the sound of her transmission, figuring out how to take the next turn even faster, her heart pounding at her dangerous maneuvers, instead our airhead protagonist is laid back, thinking about her life, her boyfriend, joking amiably over her headphone. I don't THINK so! A race car driver is an athlete. A professional. This is the most important thing she has ever done in her life, for God's sake. And, our protag also has time, during her record-setting maneuvers, to look up at the stands and observe what is going on. PUH-LEASE!

The narrator made the whole thing even worse with her "tee-hee-hee" voice. She used a high-pitched girly narration to comment on the feel of the track and the turns, for example---sounding more like she was oohing over her latest nail polish than an athlete commenting on conditions.

Despite the initial nearly fatal attack on our protag, when the lady next takes the track, no one even seems to pay any attention to the possibility that she may be being targeted so no one pays any attention to the fact that her pills went missing and are found mysteriously. No. Everyone ignores this. Although our protag has already taken pills from a different bottle (and so ignores the newly recovered pills), her mentor takes them. GUESS WHAT HAPPENS FOLKS!!

I didn't get much further than this. It was just too dumb, dumb, dumb.

Would you try another book from Dee J. Adams and/or Eve Bianco?

Dee Adams yes. Not sure about Eve Bianco

I enjoyed the story very much and thought Eve Bianco did a great job differentiating the voices. I knew who was speaking as soon as I got into the characters. I have one beef though. You could audibly hear her swallow throughout the book, as if when she was reading, she needed to swallow frequently! I would think that in some sort of editing, one could edit out those noises. It was very distracting and I almost didn't finish listening to the book because of it. Just a personal peeve, but for me very distracting.

I really enjoy racing so this book caught my attention when I read the description. Unfortunately it didn't quite live up to its potential in my opinion.

Probably my biggest complaint with this book is constantly hearing the narrator swallow. By the end of the book it had become so annoying that I almost stopped listening. Even without that, though, the first half dragged on significantly. It was also pretty obvious who the 'bad guy' was from the beginning. Though, I will say that the author had me second guessing myself several times throughout. It did finally turn out that I was right from the start.

I didn't read the first book in this series, not sure if that would have made a difference or not.

They call this a Race book?

What would have made Dangerous Race better?

If the book at actually been about racing. This character is only interested in how fast she is going, not how her car is doing, can she get more out of it, is she pushing to almost beyond the limits and she is going to cause a huge wreck - where she as well as others may be seriously injured.

Would you ever listen to anything by Dee J. Adams again?

Who would you have cast as narrator instead of Eve Bianco?

Can't think of who might take over this book. If I knew what it was really about I wouldn't buy it even is Scott Brick were the narrator.

Not really any to mention.

This book has a good mix of female toughness and softness. It is a little predictable in some instances, but it keeps you interested. I will be reading another Dee J. Adams book after this one.

Interesting with a touch of mystery and suspense. I actually think it was a little drawn out in places ans also I didn't care for two love stories involved in the plot. I think I'd prefer this to be one of the "buy on sale" books. It's good but for a creditworthy title it has to be great.

love almost everything about this audio book it has me guessing who the culprit was and I really like this. It was just the two guys guys names that were to much the same Mathew and Max. I think when hearing it to probably reading it it might be easier. But all in all it is a real great book.

Not a bad way to pass the time

This is a good, light book. Not a whole lot of character depth, though. Also, a little bit TOO happy of an ending.

Would you try another book from Dee J. Adams and/or Eve Bianco?

For goodness sake, enough with the sex scenes. Take them out there's not much left.

Would you ever listen to anything by Dee J. Adams again?

I would give her a second chance