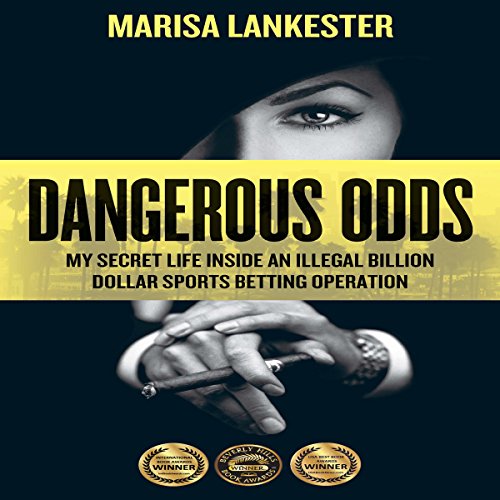 By: Marisa Lankester
Narrated by: Patricia Santomasso
Try for £0.00

Dangerous Odds - a true crime thriller memoir - is the explosive, never-been-told, behind-the-scenes look into the world of illegal sports betting, revealed by an insider, who happens to be a woman. Marisa Lankester, a young beauty with a privileged New York upbringing, stumbles into the back door of the largest illegal sports betting organization in the US, run by Ron (The Cigar) Sacco. Marisa, a thrill-seeker, maneuvers herself into this mob-run men-only bookmaking operation, and with her looks and brains, becomes a trusted insider. Along the way, Marisa falls in love with Sacco's business partner, the charismatic Tony. In an attempt to evade the wrath of the FBI, Marisa and Tony relocate Sacco's operation from Los Angeles, first to Las Vegas, and then to the Dominican Republic where gambling is legal. What begins as a fun and exciting ride on the Caribbean island, where the tall, blonde beauty also becomes a top model, morphs into a twisted nightmare. It is also the romantic tale of a beautiful, smart young woman whose love for a charismatic and handsome Italian-American leads her down the road into crime, incarceration, and rape.

Dangerous Odds is the ultimate suspenseful mystery-thriller that draws the listener into the adrenaline-pumping world of sports gambling and betting.

I really enjoyed this story. I t was fast paced with lots going on and I very quickly got to know and like the central characters. it's not a happy or glamorous story. I found it a bit gruesome and depressing in places but it was interesting because it is based on truth.

Wanted more on sports betting but turned into Tony’s Bologna

I am interested in sports betting and currently quitting on chapter 5 of this book a bit annoyed. It started turning into a romance novel that my wife would read on a beach vacation. If you are like me and actually want more of a story on sports betting Id check out Smart Money etc. Reading / narration is fine. There are enough love stories out there, just because their work place is an off shore book does not make up for all of Tony’s Bologna. Sorry.

Got better and better! And I rarely leave comments.

I have to admit, I was a little annoyed during the first part of the book because I thought the author was a little too whiny. However, I completely changed my mind as the story progressed and realized Marisa is a very strong and courageous woman. As an avid sport book bettor at offshore casinos for the past several years, I found this book to be not only fascinating, but also very believable. It left me wanting to know what happened next in her life and I was sad when it was over. Highly recommend this read, it gets more and more crazy as the story goes.

This is a rare book that is basically impossible to put down. I did get the impression that certain parts were exaggerated. But even if only half of it is true, it would still be an amazing read.

Inside in a different way

This story does not focus on the day to day operation of a sports book. Its not a how-to. This inside look, deals with the personal side of running an illegal sports book in the late 80s to mid 90s. Interesting from that perspective, more like a dated history.

I Really enjoyed this audio book

When I chose this book it was because of the sports betting connection, but It was so much more than that. This was a great audio book. It has a little bit of everything, gambling, action, adventure, and even romance. I highly recommend it.