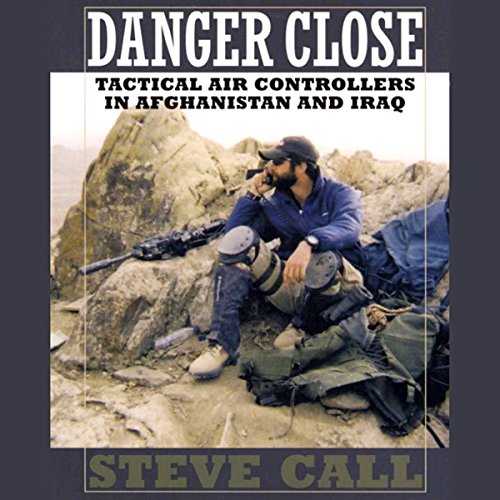 By: Steve Call
Narrated by: Claton Butcher
Try for £0.00

"America had a secret weapon," writes Steve Call of the period immediately following September 11, 2001, as planners contemplated the invasion of Afghanistan. This weapon consisted of small teams of Special Forces operatives trained in close air support (CAS) who, in cooperation with the loose federation of Afghan rebels opposed to the Taliban regime, soon began achieving impressive - and unexpected - military victories over Taliban forces and the al-Qaeda terrorists they had sponsored. The astounding success of CAS tactics coupled with ground operations in Afghanistan soon drew the attention of military decision makers and would eventually factor into the planning for another campaign: Operation Iraqi Freedom.

But who, exactly, are these air-power experts and what is the function of the TACPs (Tactical Air Control Parties) in which they operate? Danger Close provides a fascinating look at a dedicated, courageous, innovative, and often misunderstood and misused group of military professionals.

Drawing on the gripping first-hand accounts of their battlefield experiences, Steve Call allows the TACPes to speak for themselves. He accompanies their narratives with informed analysis of the development of CAS strategy, including potentially controversial aspects of the interservice rivalries between the Air Force and the Army, which have at times complicated and even obstructed the optimal employment of TACP assets. Danger Close makes clear, however, that the systematic coordination of air power and ground forces played an invaluable supporting role in the initial military victories in both Afghanistan and Iraq.

This first-ever examination of the intense, life-and-death world of the close air support specialist will introduce listeners to a crucial but little-known aspect of contemporary warfare and add a needed chapter in American military history studies.

“Steve Call has written the authoritative account of America's secret weapon in the invasions of Iraq and Afghanistan. It's a bracing and realistic tale-much of it told in the raw words of the air power experts who directed close air support for the troops on the ground. This is the ultimate untold battle story, written with an insider's expertise and savvy.” (David Zucchino, L.A. Times correspondent and author of Thunder Run)
"Fascinating and worthwile book for military professionals, strategists, historians, and interested civilians." ( Military Review)
“This book will fit well into the body of literature that is sure to emerge from the so-called Long War . . . . Overall, this book boasts both high readability and utility . . . . The book's strength derives from Call's experience, insight, and the large number of interviews he used.” ( Air Power History)

What listeners say about Danger Close: Tactical Air Controllers in Afghanistan and Iraq

This book has some great content on it's chosen subject. It discusses the structuring of the forward air controlling elements with the USAF and Army which is dry but it's own kind of interesting. The short stories from FAC's experiences in the two theaters are notable highlights but I feel like the narration lets it down. At all times the narrator is clearly spoken but almost robotic in delivery, some may find this an issue but it's worth persevering with. My main complaint (once I noticed it and couldn't un-notice) was the repeated use of "I was like..", "and they were like...", "then he was like..." but I suppose that's more to do with the author's choice of words than the narrator.

Overall it's an excellent insight, I didn't like the narration much but I'm still glad I bought and listening to it.

This book covert one mans experience working in the tactical air controllers, it does not really move forward, covering his and only his experience in American conflicts in the Far East.

For anyone interested in asymmetric warfare in the modern world. The performance is excellent. easy to listed to and very clear. The only slight problem is the early section is rushed, and you may need to go back and listen to it a few more times to get the differences between TAC and FAC etc.

Listening to Danger Close by Steve Call and narrated by Claton Butcher was an incredible experience for me. I had heard of some of the heroic things that took place in Afganistan and Iraq, but to listen to the 1st hand accounts of these men in life and death situations putting their lives on the line for their comrades and using their training, knowledge and ingenuity to make a major difference in these wars was inspiring. I listened to the book as I was driving to and from appointments during work, and I found that sometimes I didn't want to turn it off because I was caught up so much in the battle that was taking place.

Steve did a tremendous job of explaining the role of the TACPes and using the 1st hand experiences to bring to life the responsibility and the ability they had and how they made a difference in the battles. I came away with a new appreciation for what our men in uniforms do in the battlefields and the real danger that they face in those battles. I also came to understand this un-known team of men that make a major impact on the success of the United States in these wars.

Claton did a great job of narrating the book. He was able to read it with enough emotion to keep it alive, but was able to let me get my emotions tied up in the story. His voice is alive and really read well with the book.

I noticed that there was a one star rating. I don't how anyone who reads or listens to this book can come away without being in awe of what these men do to fulfill their duty and protect freedom around the world. I would recommend that if you haven't listened to this book that you do so and you to will be amazed at the wonderful work this special team of men do to make a real difference in the wars that are fought. Danger Close was written well by Steve Call and read well by Claton Butcher.

I liked it alot, but the narrating was dry and made it hard to finish.

The info presented is dated and lacking in critical detail. Additionally, battle details seem to be adjusted for the glorification of a defunct position (ALO).

No story or characters.

The narrator speaks so slowly and the facts presented are FAR from engaging that I had to speed up the audio to get through this book. Horrible! So bad-I actually returned the audio book.

What would have made Danger Close: Tactical Air Controllers in Afghanistan and Iraq better?

A narrator with some feeling in his voice. Less political history and more stories of the actual air controller battle history. The narration was deadpan!

More battlefield action or technical explanation as to what it takes to bring various air assets on targets.

I found some of the stories to be excellent. I just wish someone else would have told them.