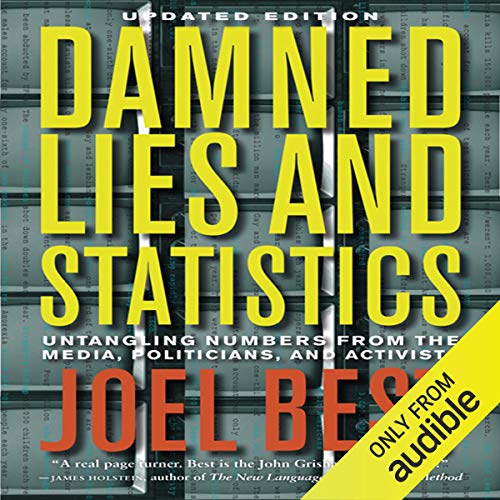 Does the number of children gunned down double each year? Does anorexia kill 150,000 young women annually? Do white males account for only a sixth of new workers? Startling statistics shape our thinking about social issues. But all too often, these numbers are wrong. This book is a lively guide to spotting bad statistics and learning to think critically about these influential numbers. Damned Lies and Statistics is essential listening for everyone who reads or listens to the news, for students, and for anyone who relies on statistical information to understand social problems.

Joel Best bases his discussion on a wide assortment of intriguing contemporary issues that have garnered much recent media attention, including abortion, cyberporn, homelessness, the Million Man March, teen suicide, the U.S. census, and much more. Using examples from The New York Times, the Washington Post, and other major newspapers and television programs, he unravels many fascinating examples of the use, misuse, and abuse of statistical information.

In this book Best shows us exactly how and why bad statistics emerge, spread, and come to shape policy debates. He recommends specific ways to detect bad statistics, and shows how to think more critically about "stat wars," or disputes over social statistics among various experts. Understanding this book does not require sophisticated mathematical knowledge; Best discusses the most basic and most easily understood forms of statistics, such as percentages, averages, and rates.

This accessible book provides an alternative to either naively accepting the statistics we hear or cynically assuming that all numbers are meaningless. It shows how anyone can become a more intelligent, critical, and empowered consumer of the statistics that inundate both the social sciences and our media-saturated lives.

What listeners say about Damned Lies and Statistics

Brilliant book, well written and down to earth. It gave a thought provoking insight into the way statistics are used as a tool and how easily they can be lost in translation. An easy to follow and interesting look at many real world cases that bring almost everything you will hear going forward into question.

No Lie, I Loved It

Some non-fiction books can make my head spin with highly technical information, but this book keeps it real. It presents what can be a rather complicated subject, statistics, in a fun and understandable manner. It explains how others can manipulate statistics to their advantage, how repeating statistics often mangles them, and other interesting facts about all those numbers we see every time we pick up a newspaper or hear a plea from a charity or cause. It warns the reader not to take statistics at face value and teaches us how to untangle the "good" statistics from the bad.

While it deals mainly with statistics, it also deals with the psychology surrounding statistics. We are much more likely to accept a statistic that seems to verify an aspect of our own world view, for instance, and more likely to question statistics (or even discard them completely) if they don't correspond to what we ourselves believe. The author presents the material in a balanced way, without bias, and points out that social statistics are never exactly measurable given the fluid nature of society.

The author starts this book out with a humorous and outlandish example of a mangled statistic that hooks you right in. Unlike many nonfiction books, this book flows right along and keeps you listening for the entertainment value alone.

Patrick Lawlor does a wonderful job with the narration, adding vitality to the subject, understanding and portraying the authors wit flawlessly.

I'd recommend this book to anyone who doesn't want to go around accepting ever number presented to them. If you are an independent thinker, then this book is for you.

How Stats Can Be Manipulated to Prove Anything

This is one of those books everyone should read—but would anyone ever get elected again? Author Joel Best shows you exactly how stats can be manipulated to prove anything.

There are no innocents.

My stats professor used to quote Mark Twain to every class: “There are lies, damned lies, and statistics.” It's possible to twist statistics to say virtually anything; for every study out there that makes one claim, there's another that "proves" the exact opposite. How can you know which one is true? Best lets you know how to spot the BS and wade through fraud studies and stats.

Well performed by the narrator, and the subject made extremely interesting. Had me laughing out loud at time with some fantastic turns of phrase. Very informative, and an aid to critical thinking.

information for a fake news age

Non biased and Essential for making and supporting fact based arguments! Gives clear and direct examples of how numbers are twisted to support agenda. Loved this book!

Too simple for me

Only wish there were more. Because the topic is so important, it deserves a longer treatment. Very satisfied with information presented, but was craving more.

Entertaining examples and interesting to see how we are sometimes manipulated.
It was a good read.

Slanted Too Far to the Right.

What disappointed you about Damned Lies and Statistics?

Author FIXATED on Activists, with no mention of Propaganda produced by Corporations.

Then without any citation to prove the claim:
Claims activists conveniently site statistics like 1 in 1 million or 2 in 1 million as some kind of statistical red herring. But with the population of the US over 300 million, that hardly makes any sense, because that's only 300 cases. Seems like this would be an under-exaggeration by an activist.

But where's the corporation bull being recorded? With corporations spending millions to hundred's of millions of dollars on deceptive ad campaigns, and now the dark money in politics, to harp about activists so far for 3 chapters seems grossly unbalanced.
What is a lobbying group? A PR organization to convince the political government of an issue, to get candidates elected, and then to convince the public. Absolutely No Mention of this while Harping on Activists.

Would you ever listen to anything by Joel Best again?

No. I'm not a 1 channel Fox News type listener. I browse multiple Qualified Sites for my info. If I can't trust this author, then no I will not buy from this author again.

It's like politics. Lie to me on Global Warming, and I don't trust you on Any Other Issue.

What does Patrick Lawlor bring to the story that you wouldn’t experience if you just read the book?

Sure, he doesn't have the smoothest voice but, for a serious subject he's fine.

Who is the publisher. If they produced this book with this slant, then I will be questioning all publication decisions.

Joel Best's book puts language around statistics to give readers a basic vocabulary of statistical analysis and an awareness that statistics are not sacrosanct. I wish it were longer and jam-packed with additional examples that would really take you by surprise. But then it would be Freakonomics.