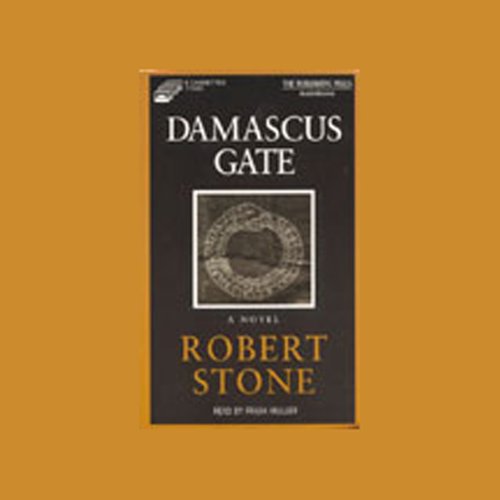 By: Robert Stone
Narrated by: Frank Muller
Try for £0.00

National Book Award-winner Robert Stone lays bare the searing tensions and desperate hopes of those who dare to seek redemption at any cost in Jerusalem. In this holiest and most fractious city, where religion and politics are inextricably bound, a plot unfolds to bomb the sacred Temple Mount. Christopher Lucas, an expatriate American journalist, skeptical and searching, stumbles upon the Temple Mount plot while on assignment to investigate religious fanatics.

Unwittingly entangled in the bombing plan is another American, Sonia Barnes, a Sufi convert and nightclub singer who is drawn with Lucas into dangerous intrigues surrounding the Old City. A violent confrontation in the Gaza strip, a race through riot-filled streets, a cat-and-mouse game in an underground maze - as Lucas follows his leads, he uncovers an attempt to seize political advantages that reveals duplicity and depravity on all sides of Jerusalem's sacred struggle. Ambitious, passionate, darkly comic, Damascus Gate is a timely and brilliant story of belief, power, salvation, and apocalypse.

What listeners say about Damascus Gate

I prefer the print version

The novel is interesting, but I didn't care for the reading, so I wound up getting the print version instead.

I am not sure just how the book was I could not get past the reader. It sounded like the first time he has read abook out loud. Just terrible. Maybe I'll look at the written one but not likely. He ended almost every sentence the same. poor