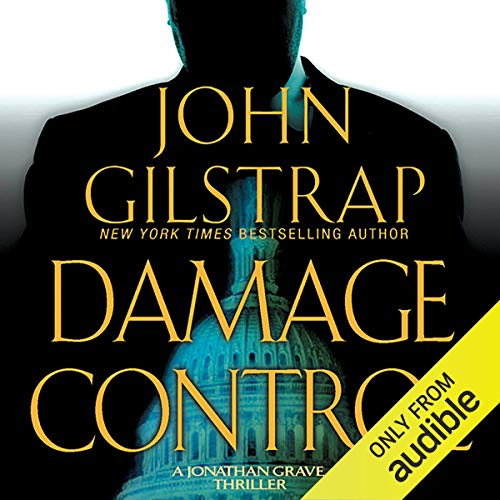 The hostages are young: a bus full of teenagers on a church mission. The ransom demands are explicit: deliver three million dollars - with zero involvement from law enforcement - or all captives will be executed. But rescue specialist Jonathan Grave doesn't believe in ultimatums. For him and his elite team at Security Solutions, it's all about protecting the innocent. Now Grave must face the chilling possibility that someone within the U.S. government has a deadly secret to protect - one that could jeopardize national security like never before.

Where does Damage Control rank among all the audiobooks you’ve listened to so far?

It's ranked pretty high. As far as series go? I would rank it 3rd. First being Kack reacher and second being Jonathan Quinn.

The characters. The action. The passion. The malice. Idk. It was very action packed and entertaining. I like to listen to books I like again a few months later. This will definitely be getting a second listen.

Which character – as performed by Basil Sands – was your favorite?

Probably Boxers. He does his voice perfect. When he talks you can actually see his ominous size and strength. Love his sarcasm too.

Sure. But I never have that luxury.

I wish Basil Sands read the whole series. I won't even buy the other ones because I don't want them ruined by another narrator (who the reviews say is terrible). Ill just have to read them myself so they'll still have the same voices and personalities in my head.

This is the fourth in a series of thrillers. The main character Jonathan Grave is one of those super human ex-military types who can take on a battalion of soldiers and win. His assignment is to exchange money for a group of people from a US mega church. Sounds easy but it doesn't end up that way. After a gunfight with the kidnappers, Jonathan, his team, and his PC (precious cargo) head north, running into many obstacles along the way. If you enjoyed the other books in this series you won't be disappointed with this one. If you are new to the series you will still enjoy it as it requires no prior knowledge of the characters. Yes, I would recommend this book to mystery/thriller readers. It's not edge-of your seat suspense but it's a good listen.

We had listened to the previous three books and were looking forward to an interesting plot and character development/exploration in this book. Instead we were treated to long descriptions of guns and violent ambushes and fights. If you like that kind of stuff, this book is for you.

Gilstrap left me breathless. My favorite tough guy hero is back and ready for action.

Jonathan Grave is No Gabriel Alon or Mitch Rapp.


I love mystery, legal, and espionage thrillers. I read every Vince Flinn, David Baldacci, John Grisham, Nelson De Mille, and Daniel Silva, I can get my hands on. Now that I have read all of their books, I find it difficult to fill the time as I am a "chain listener". After my third Jonathan Grave, I found myself cursing and groaning out loud. "That's ridiculous!" "Stop lecturing. I can't take it." “How morally inconsistent can you make one character?" By this last, I don't mean that the character varies from book to book, his basic code seems to vary within a book, especially this one. At one point, he will be teaching his PCs (precious cargo. If I had a nickel for every time the author explained that!) to kill the bad guys without remorse and at the next he's angry because a prominent political figure was once a spy who murdered people. Come on, now! If any of the above authors are your favorites and you are looking for something similar, don't look here.

Could not stand the Narrator

To each their own, all I will say is that you should do a sample listen before buying the book. I have only turned in 2 books in 10 years and this is one of them. Too bad, seemed like a good story (I only lasted an hour).

Much prefer the first and second book narrator. All those voice changes are just too much.

When a male narrator does kids and women's voices.

What would have made Damage Control better?

Don't have the male narrator try to sound like a woman or kid. It sounds like pre-1960's tv where they'd sometimes dub an adult voice to a kid. Weird. I can't get it out of my head. I haven't listened to a lot of audible fiction so I don't know if that's the norm. If it is I'll stick to non-fiction. Ruins the characters - at least the kids and women.

Would you be willing to try another book from John Gilstrap? Why or why not?

Who would you have cast as narrator instead of Basil Sands?

best in series so far

Liked story not as predictable as others have been. Luv matador and his ability to tell the story.
Definitely one to listen to.

Could not stop listening. Great book. Very intense & action packed. One of his best yet.