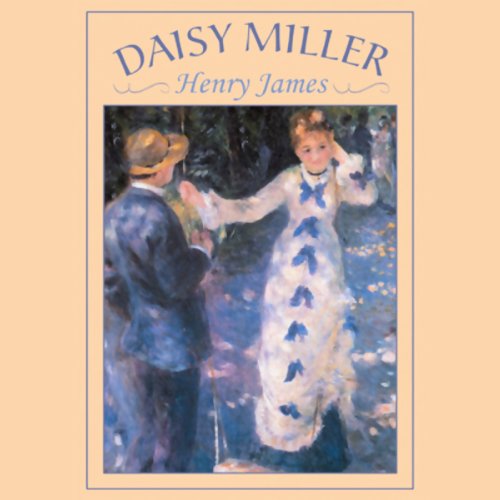 By: Henry James
Narrated by: Susan O'Malley
Try for £0.00

"What the European male fails to understand is that the American Girl is innocent by definition, mythically innocent; and that her purity depends upon nothing she says or does." (Leslie Fiedler)

When Frederick, an American expatriate traveling in Europe, meets the commonplace, newly rich Miller family from New York, he is charmed by the daughter, Daisy, and her "inscrutable combination of audacity and innocence". The Millers have no perception of the complex code that underlies behavior in European society, and Winterbourne is astonished at the girl's unworldliness and her mother's unconcern when Daisy accompanies him to the Castle of Chillon.

Some months later, he meets the family in Rome, where Daisy has aroused suspicion among the American colony by being seen constantly with a third-rate Italian. Ostracized by former friends who think her "intrigue" has gone too far, Daisy denies that she is engaged to Giovanelli. Publicly, Winterbourne defends her as simply uncultivated, but privately, he hesitates.

"By maintaining a vigorous, satisfying pace, Susan O'Malley holds the listener's attention admirably. Her reading is intelligent and agreeable." ( AudioFile)

What listeners say about Daisy Miller

This is Henry James, so you know it will be good. American expatriate Winterbourne meets Daisy Miller first in Switzerland and later when she is in Rome. There is a suspense in his attraction to her, her missteps in European society, and his ambiguous feelings towards her as he witnesses her defying the expectations of the American community in Rome. It's also a clear window into society at a different time and place in history. Perhaps, it is not the most memorable Henry James, but certainly this brief novel is an enjoyable, brief, and worthwhile read.

My grey hairs are showing

I loved this story when I was in high school. How could I not love the free spirited Daisy Miller who threw caution to the wind and lived her life on her terms? She was not going to suffer because European girls did! 30 years later, I read this and was galled and then thought that I would listen to it and like it better. Maybe I was reading something into it.

As a mother of adult children and teenagers, I am appalled by Daisy's mother and bratty little brother who were disdainful of Europe and their ways. The story was published in 1878, an age where there was no birth control or cure for many STIs, the rules protected the young women. This came out almost 35 years before the first World War! Being able to have a choice and not parade herself to men was a luxury and showed someone who was not having to resort to selling herself. Daisy, in her innocence and arrogance, was foolish in her time but her actions 60 years later would have been a breath of fresh air.

Winterbourne decided to not save Daisy not because he she is beyond moral redemption (as my high school teachers claimed) but because he knows she won't listen to anything he has to tell her.

Daisy was uncoordinated in her mind play with Winterbourne. This was cute to me as a high schooler, but now I wonder how the moralistic Winterbourne could stand it, although James does point out that Daisy was very pretty.

This is an expertly written and acted story about a character of whom I want to disown as Mrs Walker did at her party and I have a hard time liking it based on disliking her so much, but Henry James's work, after 141 years, is as much an apt picture of the stereotypes as it was when it was written.