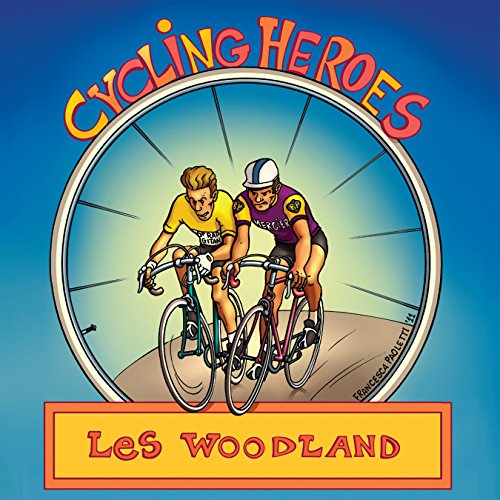 Les Woodland climbed aboard his old Carlton bike to take a nostalgia trip across Belgium and Holland to visit some of cycling's greatest riders. Cycling Heroes: The Golden Years tells the story of that journey he took in the early 1990s and the time he spent with some of the finest riders from the 1950s, '60s, and '70s. Rik van Steenbergen, Rik van Looy, Jan Janssen, Wim van Est, Hennie Kuiper, and Peter Post were some of the most colorful and dominating riders of an era that produced many of the sport's greatest-ever champions. In this book Woodland has collected their and other riders' precious and fascinating recollections, some going back to a time of leather saddles, cloth caps, and spare tires wrapped over riders' shoulders; when screaming fans packed smoke-filled velodromes to see their heroes up close; when a stage of the Tour de France could take more than 11 hours. Woodland has filled in his portrait of racing's golden years with the stories of those riders who were either too far away or time got there first, including Fausto Coppi, Louison Bobet, Jacques Anquetil, and Raymond Poulidor. Join Les Woodland on a captivating journey back to the golden age of racing.

What listeners say about Cycling Heroes

Good book, let down by narration

Like one of other reviewers, I agree that book is full of great interviews and facts, but is let down by narration, a voice with faint cheesy American accent which sounds almost like a computerised voice narration.

A gluttony of cycling facts, figures and anecdotes with a strong bias towards the lesser known of Dutch and Belgium cycling. Let down by the cheesy American accent. Writer was of an English background, so would have been more convincing with an English accent.

A ride with legends...

A rather touching ride through the roads and lives of some of Europe's finest - and oft forgotten - cycling champions. Many myths are dispelled yet the truth is somehow made more poignant through the addition of interviews. There are several 'sit up and listen carefully' moments and the overall effect is to leave one wanting to know more. It is clear that the author really knows - and loves - his subject. Chapeau!

Perhaps it's just me, and English is not my mother tongue.

I would advise you to listen carefully to samples before buying anything from this particular narrator.

I found his habit of "putting commas" after almost every second word to be a major obstacle to enjoying this book, sometimes even to following the story line.

no,sorry most of the info I already knew,the man reading the story sound like a robot.

Would you ever listen to anything by Les Woodland again?

GET A GOOD NARRATOR

Was Cycling Heroes worth the listening time?