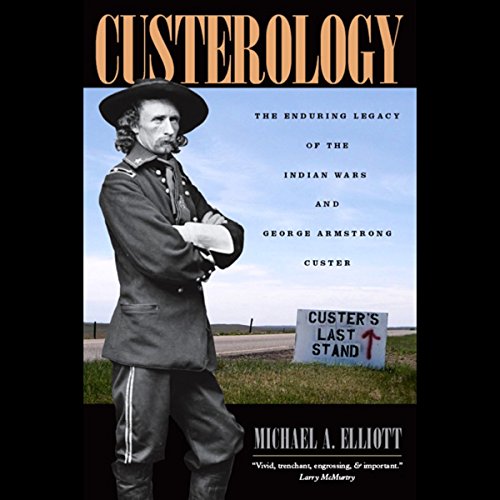 By: Michael A. Elliott
Narrated by: William Dufris

On a hot summer day in 1876, George Armstrong Custer led the Seventh Cavalry to the most famous defeat in U.S. military history. Outnumbered and exhausted, the Seventh Cavalry lost more than half of its 400 men, and every soldier under Custer's direct command was killed. It's easy to understand why this tremendous defeat shocked the American public at the time. But with Custerology, Michael A. Elliott tackles the far more complicated question of why the battle still haunts the American imagination today.

Weaving vivid historical accounts of Custer at Little Bighorn with contemporary commemorations that range from battle reenactments to the unfinished Crazy Horse memorial, Elliott reveals a Custer and a West whose legacies are still vigorously contested. He takes readers to each of the important places of Custer's life, from his Civil War home in Michigan to the site of his famous demise, and introduces us to Native American activists, Park Service rangers, and devoted history buffs along the way. Elliott shows how Custer and the Indian Wars continue to be both a powerful symbol of Americas bloody past and a crucial key to understanding the nations multicultural present.

What listeners say about Custerology

If you want to hear how fanstatic this author is, just listen to this book, he will tell you.

Off track and many tangents, parts of this book are even about Custer!