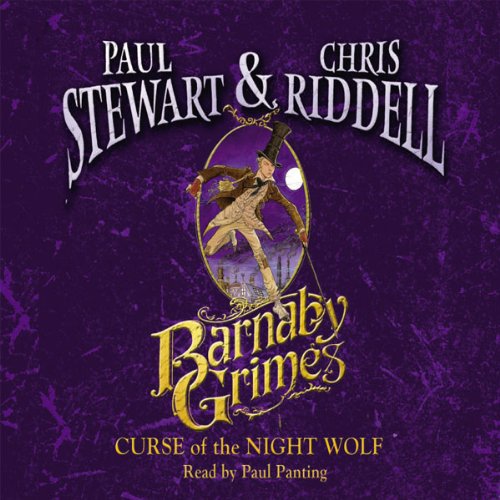 Curse of the Night Wolf

Barnaby Grimes is a tick-tock lad, running errands in his city, day and night, and "high-stacking" around the rooftops in search of new mysteries to solve.

In this first adventure, Barnaby is attacked one night by an enormous dog. He kills it: but that's not the end of this particular mystery...as Barnaby finds himself swept up in a world of crooked doctors, poor and ill-advised patients, strange tonics, and very expensive furs. Could there be more to the seemingly respectable Dr Cadwallader and the tonics he doles out to the poor? Is there a link between the tonic and the huge dogs, or possibly wolves, that are roaming the city at night?

When Barnaby's old acquaintance Benjamin goes missing, Barnaby fears the worst for him, and decides to dig deeper.

A fantastic romp through a Dickensian-style city, with a wonderful new hero in the guise of Barnaby. This new series from the best-selling dream team of Stewart and Riddell is a must for all fans of the Edge Chronicles, but also for fans of Horowitz and Shan, as they move into new territory and deliver a brilliantly exciting thriller-horror for boys.

What listeners say about Curse of the Night Wolf

Another excellent take of barnaby grimes and his high stacking adventures. A really lovely insight into an old London with many interesting characters. A good read or listen for anyone