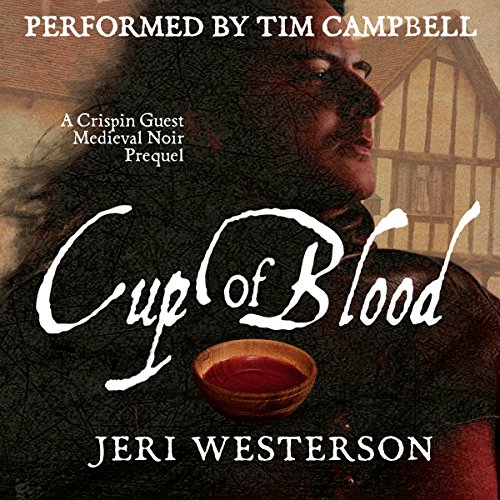 By: Jeri Westerson
Narrated by: Tim Campbell
Try for £0.00

When a corpse turns up at his favorite tavern, Crispin Guest - disgraced knight turned detective - begins an inquiry, but the dead man turns out to be a Templar knight, an order thought to be extinct for 75 years, charged with protecting a certain religious relic which is now missing. Before he can begin to investigate, Crispin is abducted by shadowy men who are said to be minions of the French anti-pope. Further complicating matters are two women: one from court with an enticing proposition, and another from Crispin's past, dredging up long-forgotten emotions he would rather have left behind. And as if all that weren't enough, a cunning young cutpurse by the name of Jack Tucker has insinuated himself into Crispin's already difficult life. The deeper Crispin probes into the murder, the more it looks like the handiwork of an old friend turned adversary. With enemies from all sides, Crispin has his hands full in more than murder in this intriguing prequel to the acclaimed series.

What listeners say about Cup of Blood

The story was very good, explains the origin of Jack Tucker.
Thoroughly spoilt by the AWFUL narrator!
Bring back Michael Page!!

I enjoyed the romp through the grail story but nearly gave up due to the narrator and his strangled vowel sounds. I just couldn’t bear another bizarre pronunciation. The pawm of the hand?!!!

A rivetting story...well interwoven plots.
certainly the story entralls but, sadly not the narrator...had to grit my teeth on times.I would guess from the sometimes heard accent and strange intonations, the narrator was not a native english speaker....the strangely pronounced words were a distraction on times.and english characters seemed to speak with a forign accent !

The narration was stilted and robotic, (think speaking clock!) for the majority of this book, apart from when the boy Jack was speaking, which spoilt it for me. The pronunciation was Americanised although the story is set in England and was annoying too. The story was OK but a bit far fetched. On the positive side, the historical facts at the end were interesting. Would I listen to it again? No!

Would you listen to Cup of Blood again? Why?

Yes - I enjoy the characters, the plot, and the writing.

Crispin Guest - he's a man who has been betrayed by people he thought were his friends. Guest, who was once a knight, has his title, money, and lands taken from him. Now he has to make a living as a "tracker" - someone who finds things or people for a price. Since the story is set under Richard II in England in the late 14th century, social classes are very distinct.

I love this man's voice. My cats love his voice, too. He does a great job with all the different voices from different classes, and his women's voices are good, too.

I laughed often at the interaction between Crispin and Jack Tucker, the eleven year old boy who sort of becomes Crispin's assistant - Jack is kept busy running to the tavern for wine, cleaning up Crispin's messy room, etc.

This is the prequel to six books in the Crispin Guest series. Audible has these six books, and the author has recently announced that there are more to come.

Good plot. I particularly enjoy historical fiction.This is a prequel to other stories to follow. Will definitely be checking them out as well.

Tim Campbell is an excellent narrator. Would not hesitate to listen to other audio books narrated by Mr. Campbell.

No particular moment. Crispin Guest, disgraced, stripped of his titles, yet still held on to his pride. Enemies abound around every corner, strong character.

I was provided this audiobook at no charge by the author, publisher and/or narrator in exchange for an unbiased review via Audiobook Boom.


Loved the full cast, the accents, the ambient sounds. This was done immersively well! The stories are captivating and exciting, and the performances catch all of the subtle nuances that come from conversations so that it didn't feel like a book reading. I definitely recommend this. -


“I was voluntarily provided this free review copy audiobook by the author, narrator, or publisher.”

Wow, this book was a joy to listen to! It's full of twists and turns, great characters and secrets upon sectrets. Being a noir story, there's also a sexy dame in distress that appears in the "detective's office". It was a lot of fun to re-visit the trope in a medieval setting :D

I admit I half-chose the book because the guy on the cover is handsome, but lemme tell you, Jeri Westerson is a great writer! Especially with characters (I loved both Jack and Crispin, and even the french villain) and the plot, which unfolds beautifully.

And of course, Tim Campbell's voice sounds like dark 90% chocolate, which is appropriate, since this is a noir mystery :D I enjoyed his narration very much.


My heartfelt thanks to the author, narrator, or publisher for providing me this audiobook via Audiobook Boom at no cost in exchange for my unbiased review.

The story is set in the time of knights and ladies but the hero, Crispin, is a former knight who is forced to make a living as a commoner. He becomes a "tracker" or a private detective. Crispin is forced to face his past when he investigates a poisoning and the suspect turns out to be his former best friend Stephen, the man responsible for Crispin's downfall. Throw in his former fiancée, Knight Templars, and a beautiful lady with a bad reputation and you have a story that delivers on the action.

One of the most memorable parts of the story was that we finally find out the background of Jack Turner, the young boy who is Crispin's servant (and sidekick). Jack is a continuing character who appears in the other books in the series and my favorite character (sorry Crispin! ).

The Heros of the Series Meet

The motivations and underlying characteristic of each of the protagonists in this book are well described and believable with the minor exception of why Vivian [spoiler alert] stole Crispin's clothes.
I feel drawn to Jack and Crispin as well as the Sheriff and look forward to many more adventures along the way.

I know this prequel was published midway through the series and for readers looking back, the beginning of the partnership of Crispin and Jack will be enjoyable but if you have not started the series, I think it will be fun to start with this Cup of Blood as I have done.

Historical fiction, of course, involves some improbabilities but where the author connects the fiction to history, it most often rings true to me.

Tim Campbell's French accent is excellent but was the accent of the other Templars supposed to be Swedish or Danish or just what was it? Very odd indeed.

Templars and the Grail

This book made me feel I was really in London in the time of Richard II. The mystery is tangled and intriguing, and the descriptions of the environment and people are just wonderful. The character of Crispin is particularly compelling. He was convicted of treason, publicly stripped of his title and property, and turned out on the streets to starve. Alone, impoverished, and thoroughly disgraced, he still clings to his pride and sense of honor.
The narrator did a wonderful job with characters from many different levels of society. Bravo!

I may be late to the party when it comes to Jeri Westerson and her Crispin Guest novels, but I’m glad I came. I picked this book up on a whim, not really knowing what to expect from it. “Cup Of Blood” is set in England in the time period of Richard II, Crispin is a down on his luck man who lost his knighthood, his land and his privileged lifestyle. Crispin’s path soon crosses with a homeless pick-pocket named Jack Tucker, who has been living by his wits on the streets since age eight. The two find themselves working together to solve a mystery involving the holy grail and a murdered Templar knight. “Cup Of Blood” is the prequel to Ms. Westerson’s Crispin Guest series so it works out perfectly for me when it comes to the reading order for the series.

Tim Campbell does a wonderful job narrating this book. I really enjoyed listening to him, partly because of his skill as a narrator and partly because he is blessed with some great pipes. Based on the strength of “Cup Of Blood,” I can easily see myself picking up the whole series. Finally, this audio book was provided by the author at no cost in exchange for an honest review, courtesy of Audio Book Boom.

In search of the Holy Grail

If you could sum up Cup of Blood in three words, what would they be?

Crispin was very chivalrous and an honorable man.

Sad for Crispin when the love of his life betrays him.

"I was voluntarily provided this review copy at no charge by the author, publisher and or narrator.”

I listened to the sample narration and read the publisher summary and decided to ask for this book in exchange for an unbiased review. So happy I did! This was a very well-written and imagined story that the narrator captured quite expertly. I immediately searched for more by both the author and narrator and I will gladly follow Lord Guest the world over!