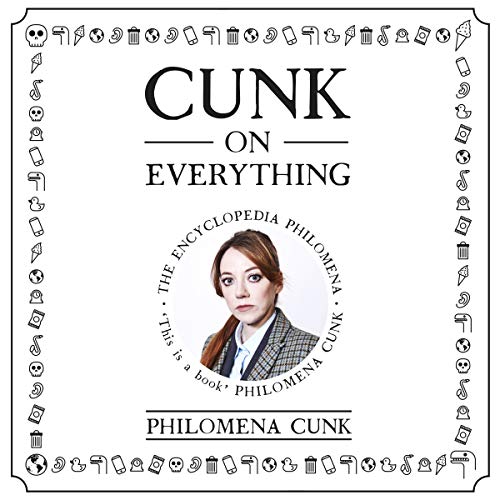 Read by Diane Morgan as Philomena Cunk, the star of Charlie Brooker's Screenwipe and Cunk on Britain.

A parody encyclopedia from the star of Charlie Brooker's Screenwipe and Cunk on Christmas.

In the olden days, people used to learn about things from encyclopedias.

And that was really good, because you could read it, and learn it, then you could stop worrying about thinking. But now, with the Internet and more people and science and research, there's just too much knowledge - more every year - and it's overwhelming.

So, after years of asking the big questions - like 'what did people do before evolution?' and 'what is clocks?' - intrepid reporter and visionary philosopher Philomena Cunk is bringing the encyclopedia back with this definitive guide to everything you will ever need to know about, from Shakespeare to sausages, from evolutionary psychology to brush strokes.

"This book is great because it covers everything in existence apart from the 95% of stuff not worth bothering with." (Philomena Cunk, star of Charlie Brooker's Weekly Wipe, Moments of Wonder and Cunk on Britain)

What listeners say about Cunk on Everything

Incredi-cunk... which isn't a word. Except it is.

Loved it. Hilarious from start to finish delivered superbly buy the Queen of Everything. Bravo.

I really enjoyed this to begin with but as it continued it became very samey... and I am only up to the letter D! Without the other people's input, like in TV show, Philomena's usually excellent character doesn't have anyone to bounce off and it all becomes a bit monotonous. I am sad to give a bad review as I loved the TV series. I am going to stop listening for a while and maybe if I pick it in a year or so it will be funny again!

Every single line has something perfectly daft about it. Brilliantly written and delivered only a way Diane can.

if you love Cunk, this is a treat

absolutely loved it. the delivery and humour is fantastic i burst out laughing in public several times. long time Cunk fan since she edged out Barry Shitpeas. Quality stuff, just wish there was more of it

this is the definitive explanation of every thing in the Modern world .Never mind all those Fictional Religious books that have been around for thousands of years THIS IS THE ONLY BOOK YOU'LL EVER NEED. (Apart from the Dictionarys and Road atlases)

A must-listen! Fantastically written and read incredibly clearly, which is a relief as every gag is an absolute gem.

Funny, but perhaps better to read than as audio

Enjoyable audio, however the encyclopaedia format can get a bit repetitive when listening for large durations. I can imagine the book would work better if you want to put down and pick up at different points.

Hilarious and well worth a listen.

I loved this book and laughed my way through it all. Philomena does a marvellous job of narrating and I’d definitely recommend the book if you’d enjoy some humour in your life.

90 degrees out of phase with the world just fantastic.
It must be very hard to be so dumb