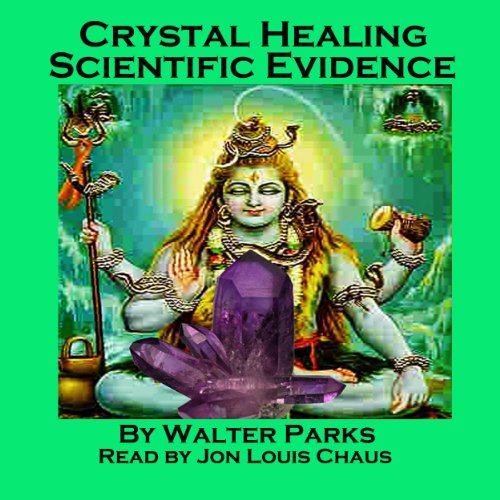 By: Walter Parks
Narrated by: Jon Louis Chaus
Try for £0.00

I felt that I had to check it out for my friend. I realized that any scientific basis for crystal healing would have to require some sort of exchange of energy between the crystal and our human body. I evaluated several types of crystals and found that the amethyst crystal had the best measurable energy field with the most available data.

I knew from Einstein's famous equation E=MC squared that our bodies are basically two kinds of matrices: one of matter (M) which is our flesh and bone, and one of energy (E) which has a measurable electromagnetic field. (C is the speed of light.) I knew that advocates of crystal healing called this field our aura.

The basic objective was then to find a mechanism that could enable our bodies to receive an energy transmission from a radiating crystal. I read the Vedas of the ancient Hindu religion and learned their beliefs regarding chakras and especially the chakra they call the third eye. I investigated this third eye and learned that our ancient ancestors did indeed have a third eye that could sense vibrations from their environment. Some primitive creatures still living today have third eyes.

I did not need any further goading from my friend to try to put this information together and compare it with the experiences reported by crystal healing advocates down through the ages.

I found the possible scientific basis for crystal healing and I describe my research and finding in a step-by-step fashion in this book.

This is more like an introduction to a thesis. He only sighted one poorly designed research study that examines the effects of crystals on healing. Instead he is laying the foundation why crystal healing research should done.

The narrator is quite dry and monotone, but the subject information does not lend itself to a lot of emotion. A lot of description is given to the pineal gland as the "third eye" but supporting statements are scant and don't carry much weight. Further and more in depth exploration of this topic in particular would have been appreciated. Likewise, further explanation of the electromagnetic vibration given off by energy matrices (both human and crystalline) would have added more depth to the studies described herein. This book was a good enough starting point. I look forward to a deeper study in the sequel.

Short, but even more helpful than I was hoping for. Liked that it had a scientific perspective to balance the "advocates." Good stuff!

This is a must read to and to your healing toolbox

Every thing is possible if you step out of the box of conventional medicine. Learn your body can heal itself without chemotherapy. You have to become Autonomic and research other survivors and believe God is in control and will introduce you to new possibilities.

Good but I expected more

This book has some good info but I felt it went off on a couple tangents at times talking about melatonin and the pituitary gland. Would have liked more scientific information.

Would you consider the audio edition of Crystal Healing Scientific Evidence to be better than the print version?

Would you be willing to try another one of Jon Louis Chaus’s performances?

No, voice was nice

I appreciate listening to and verifying the evidence provided in this book to back up the claims of crystal healing. It also highlights the aspects that are not yet proven scientifically so you have a balanced perspective.

For a short book it covers some good basic ideas regarding science and the use of crystals for healing. However the reader should have pre read the book and learned how to pronounce the words correctly. He consistently pronounced "endocrine" very wrong and it was extremely distracting to hear mispronunciations throughout. Would love to see more expanded info.