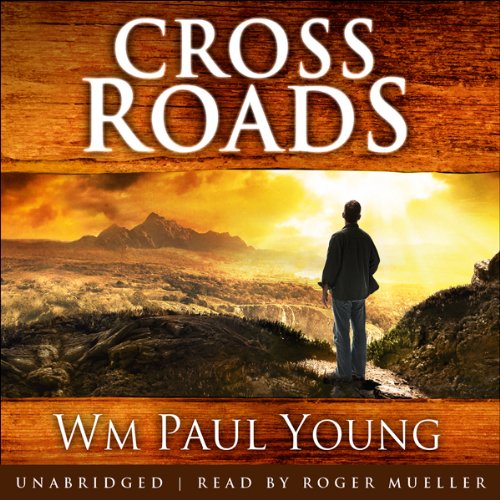 By: Wm Paul Young
Narrated by: Roger Mueller
Try for £0.00

Multi-millionaire Anthony Spencer is trapped in a coma and finds himself in a surreal world that reflects the skewed priorities of the life he's lived on Earth where he meets a stranger who turns out to be Jesus and a grandmother who is the Holy Spirit. Pleading for a second chance, he is sent back to Earth to redeem himself. There he must fight to put right the mess he's created, experiencing events through others' eyes before deciding how to use the miraculous gift he's been given. Before his illness he had set events in motion that he now needs to undo - but will he have the courage to make the right choice?

The Shack is an international phenomenon, surpassing one million copies sold before being picked up by a mainstream publisher. Its combination of radical spirituality with a heart-wrenching story made it a word-of-mouth hit, and Cross Roads has all the ingredients to repeat its impact.

What listeners say about Cross Roads

You could say I felt at a cross roads in my life. I found the book moving, enjoyable. Yes there were times it made feel sad - but at the same time I found it very uplifting and comforting.

I will listen to it again. A bit like The Shack, where you felt you needed to go over it again to check you hadn't missed any parts of the story.

Make sure you keep going

Having read "The Shack" I was excited to read Mr. Young's next book. And I have to say it does not disappoint. Although my only observation is as you reach chapter 2/3 the book slows a little but do bear with it as the story soon explodes. Excellent writing, really enjoyed the book

AS GOOD AS THE SHACK

Where does Cross Roads rank among all the audiobooks you’ve listened to so far?

THis is one of the best.

Which character – as performed by Roger Mueller – was your favourite?

No - it was quite thought provoking, but there were also a couple of genuine laugh out loud moments.

I loved this book it changes your perspective on life, death, religion, humanity.
Thank you x

Cross Roads takes you donw the path of the inner experience of life. It shows you memories stocked away, hidden but having their influence never the less. It brings you face to face with your deepest motives, drives and ambitions. On the other side it shows you the face of Jesus in a way you have never seen it before. It shows a way to turn from false beliefs in how life works, towards true life and the way one can live it fully. A remarcable tale...!!!

Bad quality recording, lots of words missed out in the replay, choppy sound. will be returning this audiobook, sadly.

Loved the Shack which set the expectations bar very high for this read.
Similar reaction on reflection in summary; knowing God more, loving Jesus deeper and aching for the daily presence and companionship of the Holy Spirit.
Also provides comforting thoughts against any fears of the afterlife.
Thanks to Paul and the team for giving us this gift.

Me and my wife had difficulty stopping listening to this narrated book. We loved it!

I worried that The Shack was too hard to follow and was afraid that this book would disappoint me. How wrong I was! Beautifully written and thought provoking, never afraid to touch on themes that are difficult to contemplate, Crossroads is every bit as tough to read and as inspiring as The Shack. The audio book is beautifully read too, bringing the characters to life.