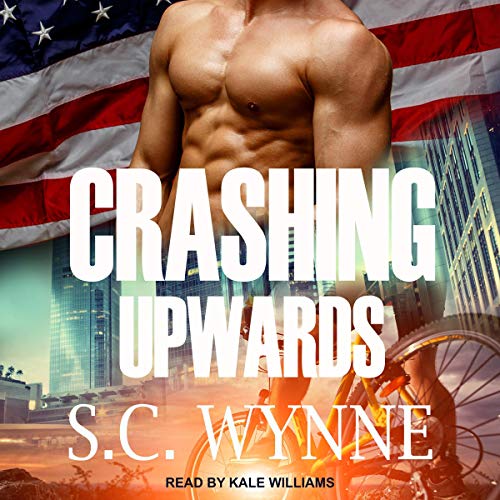 Harper Jones is a professional bike courier, and in his business if you don't ride fast, you don't make money. His apartment has mice, he's barely able to scrape up the rent, but at least he's living life on his terms and doesn't depend on anyone.

Sam Foster is the gay son of a wealthy conservative senator. He's noticed Harper before when he's dropped off packages at his dad's company, but he's never had the nerve to speak to his secret crush.

When Sam accidentally hits Harper with his car, Harper's bike is destroyed and he's injured seriously enough that he won't be delivering packages for a while. Sam decides Harper needs rescuing, and he moves in with Harper to take care of him.

Unfortunately, Sam's politician dad is convinced Harper's a con-artist and he'll do whatever it takes to get him away from his son.

What listeners say about Crashing Upwards

touching story of love despite the differences between and pride getting inbetween. Good story well written and well spoken I enjoyed t immensely.

Sam literally crashed on his crush, Harper. That’s how the story begins. Sam always had a little crush on bike messenger Harper but only from afar. As luck would have it, their worlds literally collide.

Both came from a different background. Sam came from prominence and wealth. Harper is fiercely independent but has always been struggling, keeping himself afloat.

After the crash, Sam took on the responsibility of nursing Harper back to health. Harper was very guarded and wary at first.

That’s when it gets better because you’ll get to enioy Sam and Harper become friends, and slowly fall in love. You’ll see their struggles, but you’ll also see how much they have each other’s back. It’s a beautiful love story.

Kale Williams’ narration was great! His cadence, his tone, specially how he voiced Sam, it was how I’d pictured Sam would sound like. Soothing and caring.

and the characters; there was something very genuine and touching about both. The narrator was also great. I felt the book could profit from editing, especially the connecting passages between the dialogs in the last chapters. That's the only critique and it didn't prevent me from listening twice.

it was a good story, the back and forth with the whole money issue was a little exhausting, but the story as a whole was good. Narration awesome

Kale Williams is an amazing narrator.

I really loved this heartfelt and tender love story.I will definitely relisten to this audiobook,many times over the next few years.

This book is a winner and I highly recommend it to anyone who loves,hearfelt romances.

I enjoyed this book, I'll listen to it again

I originally rated this 4stars, but I have to upgrade it. After listening a 2nd time I am so much more impressed. The last 2 chapters are total perfection. I had to listen a 3rd time, it's such a great story.
I enjoy stories of two people whose lives are so different that they would only meet and get to know each other under chance circumstances. Sam and Harper are great examples. Sam is so outgoing, empathetic and giving and Harper is withdrawn and fiercely independent. He has been twice burned by loss of trust, both from his family and an Ex to the point that he no longer trusts anyone but himself. Sam is well-to-do, Harper is barely getting by. I love the slow burn of friendship and trust that leads them to a romantic relationship and Sam's infinite patience with Harper. Sam's Dad borders on despicable, trying to break them apart because he thinks Harper is only after his money. In the end they all learn a hard lesson in trust. I was very pleased with the outcome.
The narrator did a great job and I rarely questioned who was speaking I loved his voice for Harper. When I find a book I like, I want to experience it again and this is one of those.

I really loved this book. A jaded bike messenger named Harper gets accidentally hit by car driven by a Senator's son named Sam. Well, Sam has seen Harper and been wanting to meet him for awhile. He insists upon taking care of Harper while he recuperates even though Harper doesn't want the help he needs it. Sam is sweet and genuine and they fall in love. Of course, it's complicated by its a wonderful love story. Kale Williams narration was terrific as always.

Narrator Kale Williams delivered a silky smooth and sexy MM romance. Kale has a unique calmness in the cadence of his voice. The pure sound of his voice reminds me of sweet chocolate melting in my mouth. So sweet and wishing it never ends. He has the ability to convey drama, agitation and aggression, as well as steamy sexy times.

Sam runs Harper over with his car. He sets out to take care for Harper, he has a heart of gold and although he was born with a silver spoon in the mouth, he still has his feet firm on the ground. But, except for one tiny small problem, he is closeted and under his dad’s thumb. To keep up appearances for his dad’s political campaign, he stays unhappily deep in the closet.

As he moves into Harper’s apartment to take care for him, the fun times starts.

This is a fun MM romance and I definitely recommend this if you like a rags to riches plot.